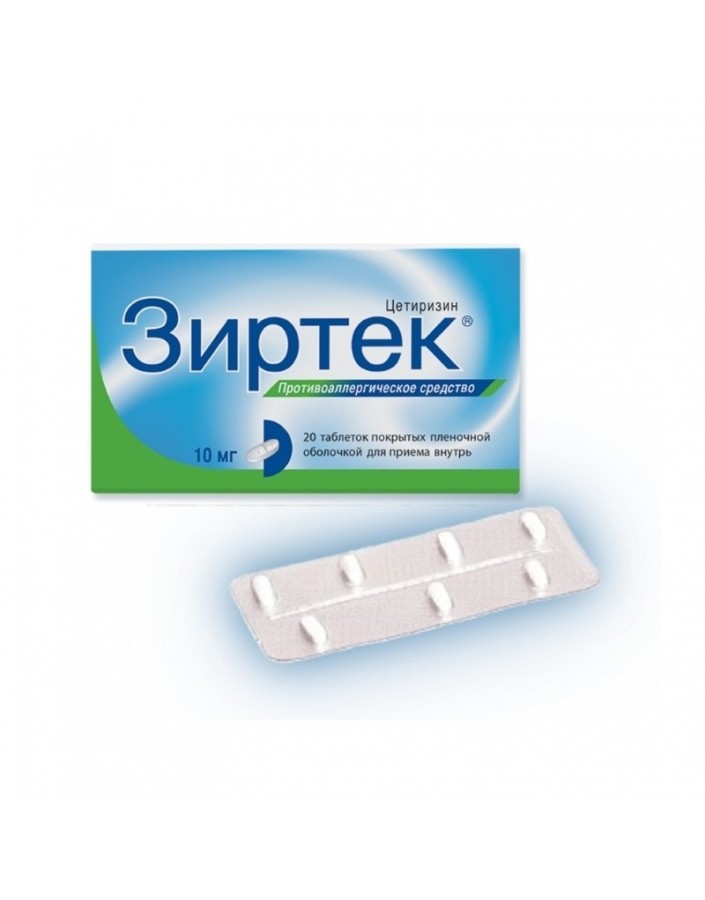 It affects the early histamine-dependent stage of allergic reactions, limits the release of inflammatory mediators at the late stage of an allergic reaction, reduces the migration of eosinophils, neutrophils and basophils, stabilizes the membranes of mast cells. Reduces capillary permeability, prevents the development of tissue edema, relieves spasm of smooth muscles. Eliminates the skin reaction to the introduction of histamine, specific allergens, as well as cooling (with the "cold" urticaria). Reduces histamine-induced bronchoconstriction in bronchial asthma of the lungs.

Practically no anticholinergic and antiserotonin action. In therapeutic doses, almost no sedative effect.

For children aged 6 months to 6 years, Zyrtec is prescribed in the dosage form for oral administration of 10 mg / ml.

In an objective assessment of the ability to drive a motor vehicle and control mechanisms, no adverse reactions were reliably detected when taking the drug at the recommended dose. But, nevertheless, during the period of taking the drug, it is advisable to refrain from engaging in potentially hazardous activities that require increased concentration and psychomotor reactions.

In case of impaired renal function

Caution should be given to the drug in chronic renal failure (moderate or severe severity), as well as to elderly patients (due to a possible decrease in glomerular filtration).

In renal insufficiency, the dose is reduced depending on the CC.

Use in old age

Precautions should be prescribed the drug to elderly patients (due to a possible decrease in glomerular filtration).

The drug is prescribed inside.

In renal failure and in elderly patients, the dose of the drug should be adjusted depending on the size of the CC.

QC can be calculated based on the concentration of serum creatinine according to the following formula:

QC for women can be calculated by multiplying the value obtained by a factor of 0.85.

Adult patients with renal and hepatic insufficiency dose set in the following table.

For patients with impaired liver function, dosing regimen adjustment is not required.

From the hemopoietic system: thrombocytopenia.

On the part of the organ of vision: disturbance of accommodation, fuzzy vision, nystagmus.

On the part of the respiratory system: rhinitis, pharyngitis.

On the part of the urinary system: urinary disorders, enuresis.

On the part of metabolism: an increase in body weight.

When studying the drug interaction of cetirizine with pseudoephedrine, cimetidine, Ketoconazole, Erythromycin, Azithromycin, glipizide and diazepam, no clinically significant undesirable interaction was revealed.

With simultaneous administration with theophylline (400 mg / day), the total clearance of cetirizine is reduced by 16% (the kinetics of theophylline does not change).

With simultaneous appointment with macrolides and ketoconazole, no ECG changes were observed.

When using the drug in therapeutic doses, data on the interaction with alcohol (with an alcohol concentration in the blood of 0.5 g / l) are not obtained. However, the patient should refrain from drinking alcohol during drug therapy in order to avoid oppression of the central nervous system.

Treatment: immediately after taking the drug should be gastric lavage or artificially induce vomiting. It is recommended the appointment of Activated carbon, conducting symptomatic and supportive therapy. There is no specific antidote. Hemodialysis is ineffective.

The drug should be kept out of the reach of children.