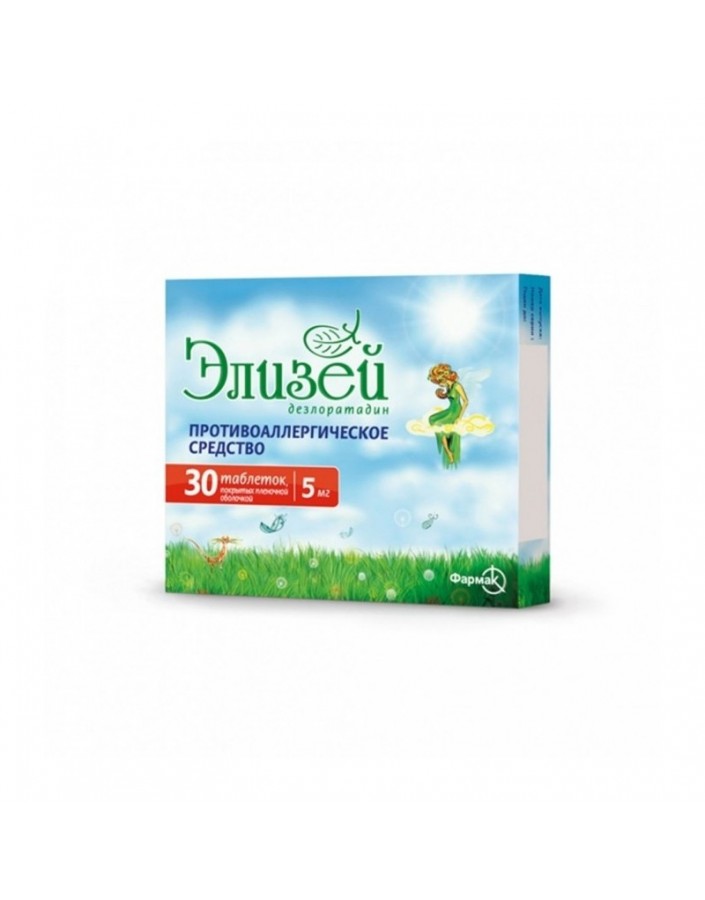 Trade name of the drug: Elisey

Desloratadine - long-acting antihistamine drug. It is the primary active metabolite of loratadine. Inhibits a cascade of reactions of allergic inflammation, including the release of pro-inflammatory cytokines, including IL-4, IL-6, IL-8, IL-13 interleukins, the release of proinflammatory chemokines (KAMTEB), the production of superoxide anions by activated polymorphonuclear neutrophils, adhesion and chytokin, and adhesion and chytosis, and the synthesis of chromomas and chromic acids., the release of adhesion molecules such as P-selectin, 1&№167;E-mediated release of histamine, prostaglandin 1) 2, and C4 leukotriene. Thus, it prevents the development and facilitates the course of allergic reactions, has antipruritic and anti-exudative action, reduces capillary permeability, prevents the development of tissue edema, and smooth muscle spasm. The drug has no effect on the central nervous system, almost does not have a sedative effect (does not cause drowsiness) and does not affect the speed of psychomotor reactions. Does not cause lengthening of the interval C) T on the ECG. The action of the drug begins within 30 minutes after ingestion and lasts for 24 hours.

Plasma concentrations of desloratadine can be determined 30 minutes after administration. Desloratadine is well absorbed, the maximum concentration is reached after an average of 3 hours. Does not penetrate the blood-brain barrier. The bioavailability of desloratadine was proportional to the dose in the range from 5 to 20 mg. Communication with plasma proteins is 83-87%.When applying a dose of desloratadine (from 5 to 20 mg) once a day for 14 days, there are no signs of clinically significant cumulation of the drug. Simultaneous ingestion of food or grapefruit juice does not affect the distribution of desloratadine when used at a dose of 7.5 mg 1 time per day. Desloratadine is not an inhibitor of SURZA4 and SUR2E4 and is not a substrate or an inhibitor of β-gigoprotein. It is extensively metabolized in the liver by hydroxylation to form 3-OH-desloratadine, coupled with the glucuronide. Only a small part of the ingested dose is excreted by the kidneys (<2%) and through the intestines (<7%). The half-life is 20-30 hours (on average, 27 hours).

Elimination of symptoms associated with the following conditions:

Hypersensitivity to the active and / or any excipient of the drug; pregnancy; breastfeeding period; age up to 12 years (efficacy and safety not established); lactase deficiency, lactose intolerance, glucose galactose malabsorption.

Method of application - inside.

Adults and children 12 years of age and the drug is prescribed in a dose of 5 mg (1 tablet) 1 time per day, regardless of the meal. The drug is recommended to take at the same time of day. The pill must be swallowed whole, without chewing, with a small amount of water. The duration of treatment depends on the severity and course of the disease. Treatment of intermittent allergic rhinitis (symptoms less than 4 days a week or less than 4 weeks) should be carried out taking into account the data of anamnesis: stop after the disappearance of symptoms and resume after their recurrence.For persistent allergic rhinitis (symptoms more than 4 days a week or more than 4 weeks), it is necessary to continue treatment during the entire period of contact with the allergen.

Desloratadine is usually well tolerated, but side effects can sometimes occur. The most common side effects are fatigue, dryness of the oral mucosa and headache. Mental disorders: hallucinations.

From the side of the heart: tachycardia, palpitations.

On the part of the gastrointestinal tract: dryness of the oral mucosa, diarrhea, abdominal pain, nausea, vomiting, dyspepsia.

Symptoms of an overdose of the drug: during clinical studies using doses higher than the recommended 5 times, severe adverse reactions were not observed. Drowsiness is possible. Treatment and measures to assist: in case of accidental ingestion of a large amount of the drug - gastric lavage, intake of Activated carbon; if necessary, symptomatic therapy. Desloratadine is not excreted by hemodialysis; the effectiveness of its removal by peritoneal dialysis has not been established.

Clinically significant changes in the plasma concentration of the drug with repeated sharing with Ketoconazole, Erythromycin, Azithromycin, Fluoxetine, cimetidine was not detected. Due to the fact that the enzyme responsible for the metabolism of desloratadine has not been established, the probability of interaction with other drugs cannot be completely excluded. In clinical and pharmacological studies, desloratadine, which was obtained with alcohol, did not increase the negative effect of ethanol on psychomotor function.

In patients with a high degree of renal failure, Elisey should be taken under the supervision of a physician. Patients with rare hereditary manifestations of galactose intolerance, lactase deficiency or malabsorption syndrome of glucose and galactose are contraindicated.

The efficacy and safety of the use of Elizia pills for children under 12 years of age have not been established. The effect of a medicinal product for medical use on the ability to drive vehicles, mechanisms

Patients should be informed that in very rare cases, some people feel drowsiness, dizziness, which may affect their ability to drive a car and complex equipment.

Store in a dark place at a temperature not exceeding 25 ° C. Keep out of the reach of children.