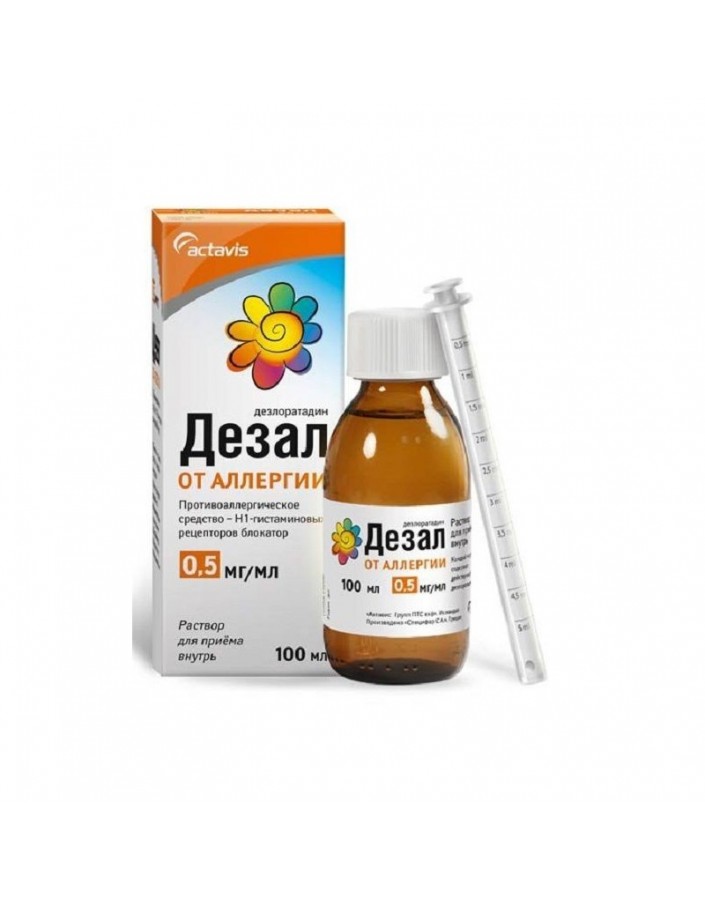 To relieve or eliminate symptoms:

- allergic rhinitis (sneezing, nasal congestion, rhinorrhea, itching in the nose, itching of the sky, itching and redness of the eyes, watery eyes);

Is ingested, regardless of the meal.

In children aged 2 to 11 years with the use of Desloratadine, the frequency of side effects was the same as with placebo.

The following side effects were observed in children under 2 years of age with the use of desloratadine, the frequency of which was slightly higher than with placebo: diarrhea (3.7%), increased body temperature (2.3%), insomnia (2.3%).

The following side effects were observed in adults and adolescents aged 12 years and older with the use of desloratadine, the frequency of which was slightly higher than with placebo: fatigue (1.2%), dry mouth (0.8%), headache (0.6%).

When using the drug in adults and adolescents in the recommended dose of 5 mg / day, the frequency of drowsiness is not higher than with placebo.

From the side of the central nervous system: dizziness, drowsiness, insomnia, psychomotor hyperactivity.

Since the cardiovascular system: tachycardia, palpitations.

From the musculoskeletal system: myalgia.

- hypersensitivity to the active or any excipient of the drug;

- children's age up to 1 year (efficacy and safety have not been established);

- hereditary diseases - fructose intolerance, impaired glucose / galactose absorption or deficiency of sucrase / isomaltase in the body (due to the presence of sorbitol in the preparation).

WITH caution should use the drug for severe renal failure.

The purpose of the drug during pregnancy is contraindicated due to the lack of clinical data on the safety of its use in this period.

Desloratadine is excreted in breast milk, so its use during breastfeeding is contraindicated.

With caution should use the drug in severe renal failure.

It is contraindicated in children under the age of 12 years, because efficacy and safety not established.

The efficacy and safety of Desal in children under the age of 1 year has not been established.

The differential diagnosis between allergic rhinitis and rhinitis of a different origin in children under 2 years of age presents certain difficulties. When conducting a differential diagnosis should pay attention to the presence or absence of foci of infection or structural abnormalities of the upper respiratory tract, to conduct a thorough history, examination, as well as appropriate laboratory tests and skin tests.

In the case of pronounced impaired renal function, Desal should be taken with caution.

Impact on the ability to drive vehicles and mechanisms

AT Investigations of the effect of desloratadine on the ability to drive motor transport did not show any disruption in concentration.However, it should be borne in mind that it is very rare for some patients to develop drowsiness, in this case care should be taken when driving and working with mechanisms.

Symptoms: Reception in a dose exceeding recommended in 9 times (45 mg), did not lead to the appearance of any clinically significant symptoms. Perhaps the development of drowsiness.

Treatment: necessary gastric lavage, taking activated charcoal; if necessary, symptomatic therapy. Desloratadine is not excreted by hemodialysis, the effectiveness of peritoneal dialysis has not been established.

In case of accidental ingestion of a large amount of the drug, the patient should immediately consult a doctor.

No clinically significant interaction with other drugs was revealed (including with Ketoconazole and erythromycin).

Desloratadine does not enhance the effect of ethanol on the central nervous system.