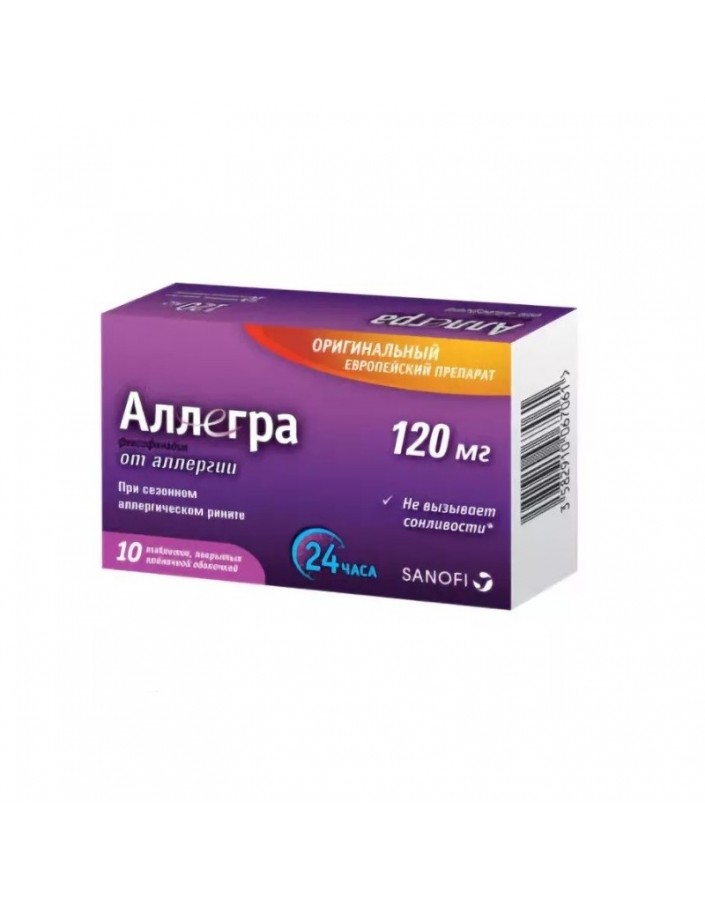 Tablets are intended for ingestion.

Recommended dose of fexofenadine with seasonal allergic rhinitis for adults and children 12 years and older makes 120 mg once a day before food.

Recommended dose of fexofenadine with chronic urticaria for adults and children 12 years of age and older, it is 180 mg once a day before meals.

Studies in special risk groups (elderly patients, patients with renal and hepatic insufficiency) showed that they do not require correction of the dosage regimen.

In placebo-controlled clinical trials, the most frequent (≥1% - <10%) observed undesirable effects were headache (7.3%), drowsiness (2.3%), dizziness (1.5%) and nausea 1.5%. When taking fexofenadine, the frequency of the above adverse effects was similar to that of taking placebo.

In placebo-controlled studies with a frequency of less than 1% (equally when taking fexofenadine and placebo) and with post-marketing use of the drug were weakness, insomnia, nervousness and sleep disorders or unusual dreams (paroniria), such as nightmares; tachycardia, palpitations; diarrhea.

- hypersensitivity to any of the components of the drug;

- in patients with chronic renal and hepatic insufficiency, as well as in elderly patients (lack of clinical experience in this category of patients);

- in patients with cardiovascular diseases, including in the anamnesis (antihistamines can cause heartbeat and tachycardia).

There is not enough data on the use of fexofenadine in pregnant women. Limited animal studies have shown no signs of adverse effects on pregnancy, fetal development, childbirth, and postnatal development. Fexofenadine should not be used during pregnancy.

Data on the content of fexofenadine in breast milk when it is taken by nursing women is not available. However, when taking terfenadine, its penetration into breast milk of lactating women was observed. Therefore, the use of fexofenadine during the lactation period is not recommended.

Use with caution in chronic liver failure. Correction of the dosing regimen is not required.

Use with caution in chronic renal failure. Correction of the dosing regimen is not required.

Use of the drug with caution for elderly patients (lack of clinical experience with this category of patients). Correction of the dosing regimen is not required.

It is recommended that the time interval between taking fexofenadine and antacids containing aluminum or Magnesium hydroxide is at least 2 hours.

For use in children from 6 to 11 years old pills are available 30 mg.

When taking the drug, it is possible to perform work that requires a high concentration of attention and speed of psychomotor reactions (with the exception of patients with non-standard reaction). Therefore, it is recommended to check the individual response to fexofenadine before engaging in such activities.

Treatment: in case of overdose, it is recommended to conduct gastric lavage, taking Activated carbon, if necessary, symptomatic and supportive therapy. Hemodialysis is ineffective.

When combined with fexofenadine Erythromycin or Ketoconazole, the concentration of fexofenadine in plasma increases by 2-3 times, but this is not associated with a significant lengthening of the QTc interval. There were no significant differences in the incidence of adverse effects with the use of these drugs in monotherapy and in combination. Animal studies have shown that the aforementioned increase in plasma concentrations of fexofenadine is probably associated with improved absorption of fexofenadine and a decrease in its biliary excretion or secretion into the lumen of the gastrointestinal tract.

The interaction between fexofenadine and Omeprazole is not observed.

Does not interact with drugs that metabolize in the liver.

Acceptance of aluminum or magnesium-containing antacids 15 minutes before taking fexofenadine results in a decrease in the bioavailability of the latter as a result of apparently binding in the gastrointestinal tract.

At a temperature not higher than 25 ° С. Keep out of the reach of children!