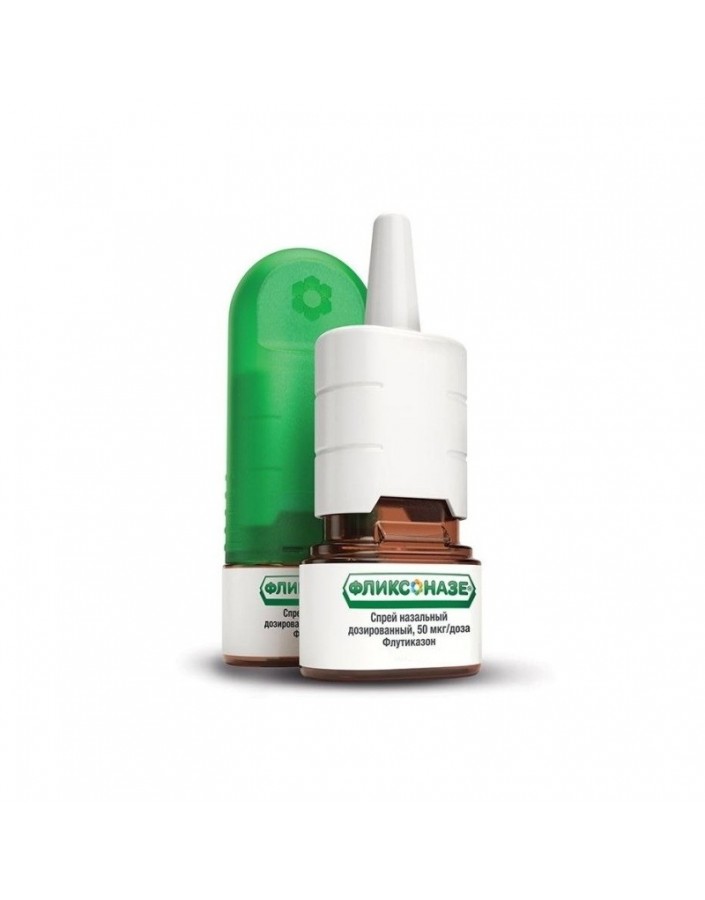 Glucocorticosteroid for topical use.

Fluticasone Propionate - A substance with a strong anti-inflammatory effect. With intranasal administration, there is no marked systemic effect or suppression of the hypothalamic-pituitary-adrenal system. No significant change in the daily area under the pharmacokinetic curve of serum cortisol was detected after administration of fluticasone propionate at a dose of 200 μg / day compared with placebo (ratio: 1.01, 90% CI - confidence interval from 0.9 to 1.14).
Fluticasone propionate has an anti-inflammatory effect due to interaction with glucocorticosteroid receptors. Suppresses the proliferation of mast cells, eosinophils, lymphocytes, macrophages, neutrophils; reduces the production of inflammatory mediators and other biologically active substances (histamine, prostaglandins, leukotrienes, cytokines) during the early and late phases of an allergic reaction. Fluticasone propionate has a fast anti-inflammatory effect on the nasal mucosa, and its anti-allergic effect is already manifested 2-4 hours after the first use. Reduces sneezing, itching in the nose, runny nose, nasal congestion, discomfort in the region of the paranasal sinuses and the sensation of pressure around the nose and eyes. In addition, it relieves the eye symptoms associated with allergic rhinitis. Reducing the severity of symptoms (especially nasal congestion) persists for 24 hours after a single spray in a dose of 200 mg.
Fluticasone propionate improves the quality of life of patients, including physical and social activity.

After intranasal administration of fluticasone propionate at a dose of 200 µg / day, maximum equilibrium plasma concentrations are not quantitatively determined in most patients (less than 0.01 ng / ml). The highest plasma concentration was recorded at a level of 0.017 ng / ml.
Direct absorption from the nasal cavity is unlikely due to the low water solubility and swallowing of the majority of the drug. Absolute oral bioavailability is low (less than 1%) as a result of a combination of incomplete absorption from the gastrointestinal tract and active metabolism during the first passage through the liver. Overall systemic absorption is thus extremely low.

Fluticasone propionate has a large volume of distribution in the equilibrium state (approximately 318 liters). Communication with plasma proteins is high (91%).

Treatment of year-round and seasonal allergic rhinitis, including pollinosis (hay fever) in adults and children from 4 years old (elimination of symptoms such as pain and pressure sensation in the area of ​​the paranasal sinuses, nasal congestion, runny nose, sneezing, itchy nose, watery eyes).

Before using the drug should consult a doctor if you are taking:

Also, consult with your doctor if you have glaucoma or cataracts.
Take with caution if you have infections of the nasal cavity or paranasal sinuses. It should be borne in mind that infectious diseases of the nose require appropriate treatment, but are not a contraindication to the use of the nasal spray Fliksonase ®.

USE IN PREGNANCY AND DURING BREASTFEEDING

Before using Fliksonaze® during pregnancy and lactation, you should consult with your doctor.Fliksonaze ​​® can be prescribed to pregnant and lactating women only when the expected benefit to the patient exceeds any possible risk to the fetus or child.

METHOD OF ADMINISTRATION AND DOSES

Elderly patients
The usual dose for adults.
Children from 4 to 12 years
On 1 injection in each nostril 1 time per day (100 mg per day).

The maximum daily dose is 100 mcg (not more than 1 injection in each nostril).
If there is no effect from the use of the drug in all age groups of patients, it is necessary to consult a doctor.

Before use, gently shake the bottle, take it, placing the index and middle fingers on both sides of the tip, and the thumb - under the bottom.

At the first use of the drug or a break in its use for more than 1 week, the condition of the sprayer should be checked: send the tip away from you, make several presses until a small cloud emerges from the tip. Next, you need to clear your nose (blow your nose). Close one nostril and insert the tip into the other nostril. Tilt your head slightly forward while continuing to hold the bottle vertically. Then you should begin to inhale through the nose and, while continuing to inhale, press once with your fingers to dispense the preparation. Exhale through the mouth. Repeat the procedure for the second spray in the same nostril, if necessary. Then completely repeat the procedure described by inserting the tip into the other nostril. After use, blot the tip with a clean cloth or handkerchief and cap it.

Rinse the sprayer at least 1 time per week. To do this, carefully remove the tip and rinse it in warm water. Shake off excess water and leave to dry in a warm place. Avoid overheating. Then carefully set the tip to its original place at the top of the vial. Wear protective cap.

If the tip hole is clogged, the tip should be removed as described above and left for some time in warm water.Then rinse under running cold water, dry and put on the bottle again. Do not clean the tip opening with a pin or other sharp objects.

No data on acute or chronic overdose of fluticasone propionate.

In healthy volunteers, intranasal administration of 2 mg of fluticasone propionate twice a day for 7 days did not affect the function of the hypothalamic-pituitary-adrenal system (the dose is 20 times higher than the therapeutic one). The use of the drug in doses higher than recommended for a long period of time may lead to a temporary inhibition of adrenal function. In case of overdose, consult a doctor.

INTERACTION WITH OTHER MEDICINES

Inhibitors of the CYP3A4 isoenzyme of the cytochrome P450 enzyme system cause a negligible (erythromycin) or a slight (ketoconazole) increase in plasma concentrations of fluticasone propionate, which do not entail any noticeable decrease in serum cortisol concentrations. However, caution should be exercised in the combined use of CYP3A4 isoenzyme inhibitors of the cytochrome P450 enzyme system (n