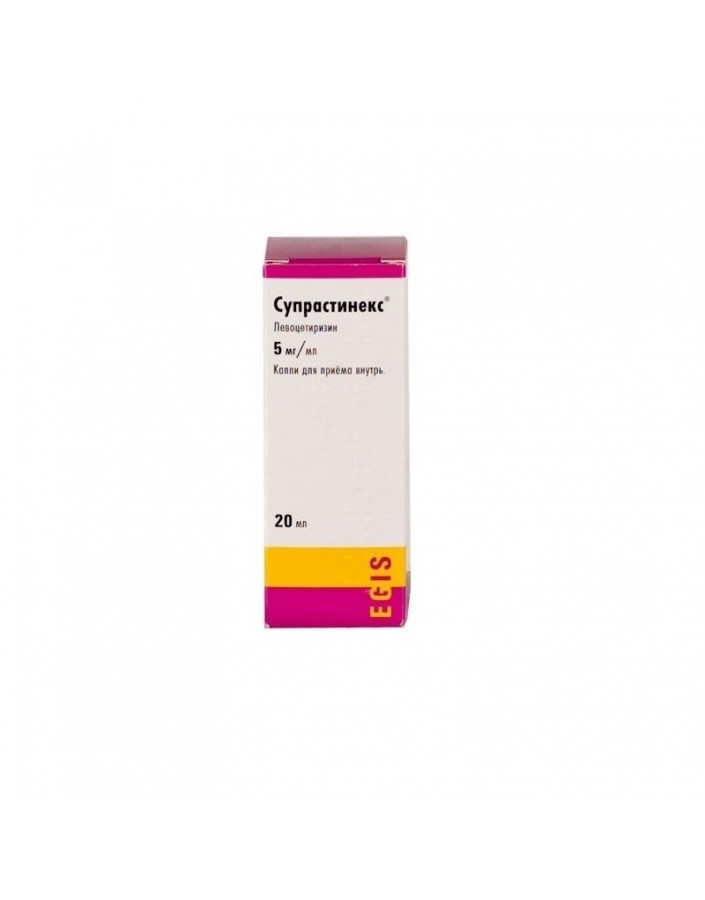 Suprastinex - histamine H1 receptor blocker. Levocetirizine - Cetirizine enantiomer, competitive histamine antagonist. Blocks H1-histamine receptors, the affinity for which is 2 times higher than that of cetirizine. It affects the histamine-dependent stage of allergic reactions, reduces the migration of eosinophils, reduces vascular permeability, limits the release of inflammatory mediators. Prevents the development and facilitates the course of allergic reactions, has antiexudative, antipruritic effect. Virtually no anticholinergic and antiserotonergic actions. In therapeutic doses, almost no sedative effect.

- Renal failure severe (CC less than 10 ml / min).
- Children's age up to 6 years (for this dosage form).
- Pregnancy.
- Lactation period.
- lactose intolerance, hereditary lactase deficiency lapp (lactase deficiency in some ethnic groups of the North) or glucose-galactose malabsorption syndrome (due to the content of lactose tablets).
- Hypersensitivity to the active (including to piperazine derivatives) or any auxiliary component of the drug.
Caution should be used when:
- Chronic renal failure.
- Elderly patients (possible reduction of glomerular filtration).

Studies conducted on animals have not revealed a direct or indirect adverse effect on pregnancy, embryo or fetus development, childbirth, or postnatal development. Controlled clinical studies on the safety of the drug in pregnant women have not been conducted, so the drug should not be prescribed during pregnancy.
Levocetirizine is excreted in breast milk, so if you need to use during lactation, breastfeeding at the time of taking the drug should be stopped.

The drug should be taken orally during meals or on an empty stomach. Drops should be taken orally immediately after dilution. The daily dose is recommended to take for 1 reception. The recommended dose for adults and children over 6 years old, elderly patients (assuming normal kidney function) is 5 mg - 1 ml drops or 20 drops from an IV drip per day. Children aged 2 to 6 years, the drug is prescribed in the form of drops. The daily recommended dose is 2.5 mg in 2 divided doses in equal doses of 1.25 mg (2 times 0.25 ml drops = 2 x 5 drops from an IV). The duration of treatment depends on the disease. The course of treatment of pollinosis is on average 1-6 weeks. In chronic diseases (year-round rhinitis, chronic idiopathic urticaria), the course of treatment may be increased. There is a clinical experience of using the drug for up to 18 months.

Influence on ability to drive motor transport and control mechanisms: during the period of treatment, it is recommended to refrain from engaging in potentially hazardous activities that require increased concentration and psychomotor reactions.

Studies of the interaction of levocetirizine showed no clinically significant interaction with pseudoephedrine, cimetidine, Ketoconazole, Erythromycin, Azithromycin, glipizide, and diazepam. Combined use with macrolides or ketoconazole did not cause significant changes in the ECG.
Theophylline (400 mg /) reduces the total clearance of levocetirizine by 16%. In this case, the pharmacokinetics of theophylline does not change.
Levocetirizine does not enhance the effects of ethanol; however, in sensitive patients, the simultaneous use of levocetirizine with ethanol or other means that depress the central nervous system may affect the central nervous system.

Symptoms: overdose in adults manifests drowsiness, in children - excitement, anxiety, which are replaced by drowsiness.
Treatment: there is no specific antidote. Recommended symptomatic and supportive therapy, gastric lavage. Hemodialysis is ineffective.

Store at a temperature not higher than 25 ° С. Do not freeze.