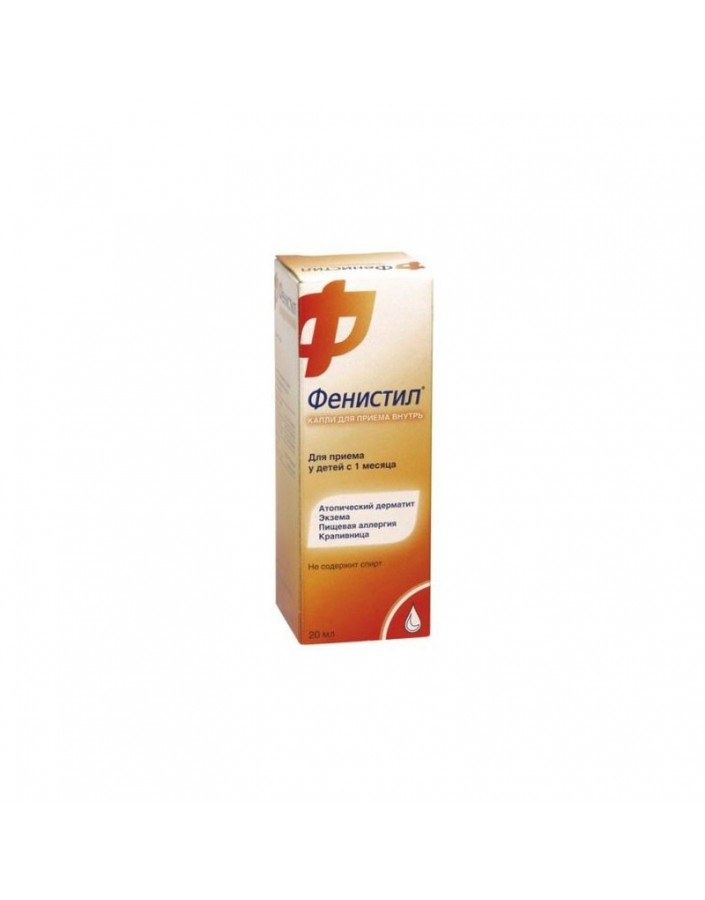 Fenistil is a blocker of histamine H 1 -receptors. It has anti-allergic and antipruritic effect. Significantly reduces the increased capillary permeability associated with allergic reactions. It blocks the action of kinins, has a weak anticholinergic effect, may cause a slight sedation. Antiemetic effect does not have.
With the external use of the drug in the form of a gel, the action begins after a few minutes and reaches a maximum after 2-4 hours.
With prophylactic administration of the drug, a decrease in the severity of hay fever symptoms is noted.

For oral administration:
- symptomatic treatment of allergic diseases (including urticaria, hay fever, perennial allergic rhinitis, food and drug allergies);
- pruritus of various origin (with the exception of itching associated with cholestasis);
- pruritus in diseases with skin rashes, such as chickenpox;
- insect bites;
- as an adjuvant for eczema and other pruritic dermatoses of allergic origin.

- angle-closure glaucoma (when taken orally);
- urination disorders, incl. with hypertrophy of the prostate gland (by ingestion);
- Hypersensitivity to dimetindenu and other components that make up the drug.
The drug is not prescribed to newborns (especially premature) at the age of 1 month.

* 20 drops = 1 ml = 1 mg of dimetinden maleate.
Fenistil drops should not be exposed to high temperatures; they should be added to the bottle with warm baby food just before feeding. If the child is already fed from a spoon, the drops can be given undiluted, with a teaspoon. Drops taste good.

Use of Fenistil in pregnancy is possible only for health reasons and under medical supervision.
It is not recommended to prescribe fenistil nursing mothers during lactation.

It is not recommended to use Fenistil in patients with bronchial asthma.
Do not use Fenistil simultaneously with anti-depressants, MAO inhibitors (including with nialamide).
Use in pediatrics
Be cautiously prescribed fenistil in the form of a solution-dropschildren under 1 yearbecause they have a sedative effect may be accompanied by episodes of sleep apnea. Haveyoung children Fenistil, like other antihistamines, can cause arousal.
Influence on ability to drive motor transport and control mechanisms
Patients whose activities require increased concentration of attention and quick psychomotor reactions (driving a car, working with mechanisms) are not recommended to take the drug.

Store at a temperature not exceeding 30 ° C; protect from light.