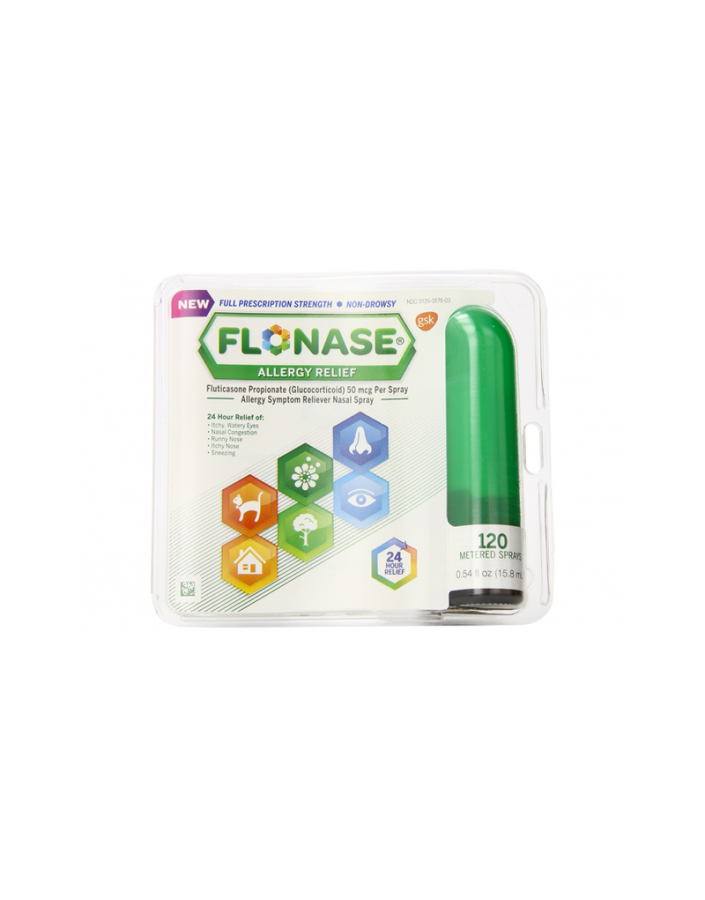 Spray nasal dosage in the form of a white opaque suspension, free from foreign particles.

GCS for intranasal use. It has a pronounced anti-inflammatory, anti-edematous and anti-allergic effect. Anti-inflammatory effect is realized as a result of the interaction of the drug with glucocorticosteroid receptors. Suppresses the proliferation of mast cells, eosinophils, lymphocytes, macrophages, neutrophils. Fluticasone propionate reduces the production of inflammatory mediators and a number of biologically active substances (including histamine, prostaglandins, leukotrienes, cytokines) during the early and late phases of an allergic reaction. It has a quick anti-inflammatory effect on the nasal mucosa. Antiallergic effect appears already 2-4 hours after the first use. Reduces sneezing, itching in the nose, rhinorrhea, nasal congestion, discomfort in the region of the paranasal sinuses and the sensation of pressure around the nose and eyes. In addition, it relieves the eye symptoms associated with allergic rhinitis. Reduction of symptoms (especially nasal congestion) persists for 24 hours after a single spray application at a dose of 200 μg.Fluticasone propionate improves the quality of life of patients, including physical and social activity. When used in recommended doses, the drug does not have a systemic effect and practically does not inhibit the hypothalamic-pituitary-adrenal system.

Absorption After intranasal administration of fluticasone propionate (200 μg /), Cmax in the blood plasma is not detected in most patients (ie, it is less than 0.01 ng / ml). The highest Cmax value is 0.017 ng / ml. Direct absorption from the mucous membrane of the nasal cavity is negligible due to the low solubility of the drug in water, as a result, most of the dose is ultimately swallowed. When oral fluticasone propionate is taken orally, less than 1% of the dose is absorbed into the blood due to low absorption and presystemic metabolism. These reasons are due to the extremely low total absorption from the nasal cavity and gastrointestinal tract (swallowed drug). Distribution When Css in plasma fluticasone is reached, propionate has a significant Vd of about 318 l. Plasma protein binding is about 91%. The metabolism of fluticasone propionate is subject to the effect of "first pass" through the liver, it is metabolized with the participation of CYP3A4 isoenzyme with the formation of an inactive carboxyl metabolite. Withdrawal Excreted mainly with bile in unchanged form and in the form of metabolites.

Local reactions: dryness and irritation of the nasopharynx, unpleasant taste and smell, nosebleeds, burning sensation, nasal congestion; very rarely (less than 1/10 000 cases) - perforation of the nasal septum (especially during surgical interventions in the nasal cavity in history). Allergic reactions: skin rash, swelling of the face and tongue; very rarely (less than 1/10 000 cases) - Anaphylactic reactions and bronchospasm. Other: headache. Very rare cases of development of glaucoma, elevation of intraocular pressure and cataracts have been reported during long-term use of fluticasone propionate, however, a causal relationship in clinical studies of up to 1 year was not detected.

Care must be taken when transferring patients with systemic corticosteroid therapy to treatment with Flixonase, if there is reason to assume dysfunction of the adrenal glands. With prolonged use of the drug requires regular monitoring of the function of the adrenal cortex. The patient should be warned that if after 7 days of continuous use of the drug does not improve, then you should consult a doctor. With continued use of the drug for more than 6 months, medical monitoring of the patient’s condition is necessary.In most cases, the use of Flixonase ​​allows you to successfully control the symptoms of seasonal allergic rhinitis, but in some cases, with a very high concentration of allergens in the air in the summer, additional therapy may be required. For relief of ophthalmic manifestations in the background of successful therapy of seasonal allergic rhinitis, additional treatment may be required.