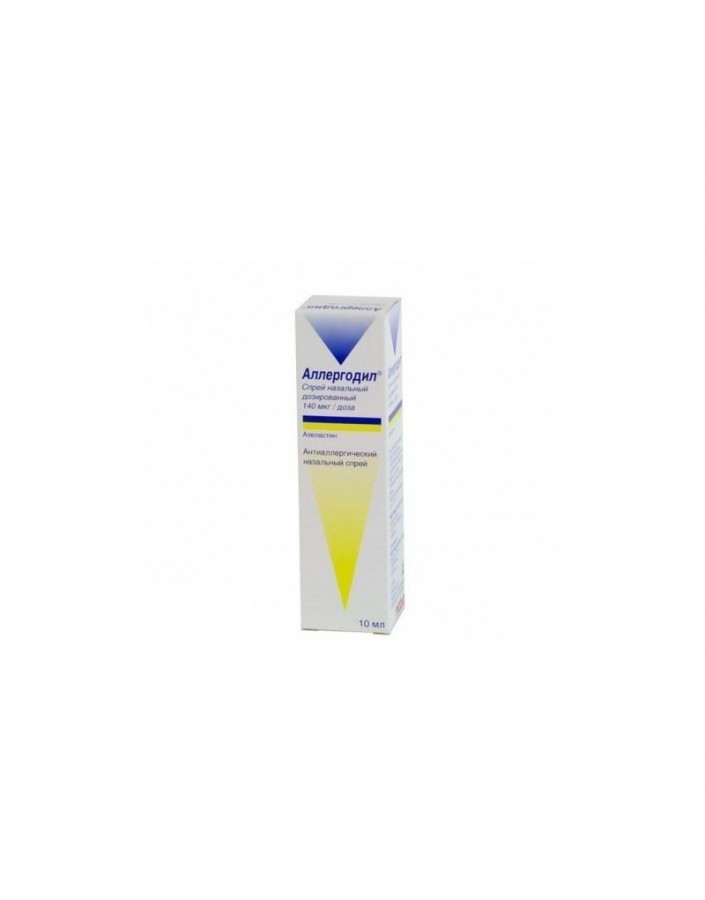 pharmachologic effect
Azelastine, a phthalazinone derivative, is a long-acting antiallergic agent. Being a selective H1-histamine blocker, it has antihistamine, antiallergic and membrane-stabilizing drugs, reduces capillary permeability and exudation, stabilizes mast cell membranes and prevents the release of biologically active substances from them (histamine, serotonin, leukotrienes, activating cells. and promoting the development of early and late stages of allergic reactions and inflammation. When applied topically, the systemic effect is insignificant.
Intranasal administration reduces itching and nasal congestion, sneezing and rhinorrhea. The weakening of the symptoms of allergic rhinitis is observed from 15 minutes after application and lasts up to 12 hours or more.
Clinically significant effects on QT (QTc) interval is absent even with prolonged use of high doses of azelastine.
Pharmacokinetics
Bioavailability after intranasal use is about 40%.
The maximum concentration (Cmax) in the blood after intranasal administration is achieved in 2-3 hours.When applied intranasally at a daily dose of 0.56 mg azelastine hydrochloride (one injection in each nasal passage twice a day), the average equilibrium concentration of azelastine hydrochloride in plasma 2 hours after administration is 0.65 ng / ml.
Doubling the total daily dose to 1.12 mg (two injections into each nasal passage twice a day) leads to a steady average plasma concentration of azelastine equal to 1.09 ng / ml.
However, despite the relatively high absorption in patients, systemic exposure after intranasal administration is approximately 8 times lower than after oral administration of a daily dose of 4.4 mg azelastine hydrochloride, which is a therapeutic oral dose for the treatment of allergic rhinitis.
Intranasal use in patients with allergic rhinitis causes an increase in plasma azelastine levels compared with healthy subjects.
Other pharmacokinetic data have been studied with oral administration.
Communication with blood proteins 80-90%.
Metabolized in the liver by oxidation with the participation of the cytochrome P450 system with the formation of the active metabolite dezmetilazelina. Excreted mainly by the kidneys as inactive metabolites.
The elimination half-life (T1 / 2) of azelastine is about 20 hours, its active metabolite dezmetilazelastina is about 45 hours.

The volume of one injection (one dose) is 0.14 ml and contains 140 μg of the active substance.

Often, as a result of the wrong method of administration, when the head is thrown back, a bitter taste may appear in the mouth, which in rare cases can cause nausea.
Infrequently - a weak, transient irritation of the inflamed mucous membrane of the nose, manifested by burning, itching, sneezing, in rare cases nasal bleeding.
Very rarely - allergic reactions (rash, pruritus, urticaria), weakness, dizziness (may be caused by the disease itself).

Overdose
Currently, cases of drug overdose with intranasal use are unknown.

special instructions
In some cases, the use of nasal spray reveals fatigue, varying severity and weakness, which can also be caused by the underlying disease. In these cases, it is not recommended to drive a car and work with dangerous machinery. Drinking alcohol can increase these effects.

Release form
Spray nasal dosed 140 mcg / dose.
On 10 ml of solution in a glass bottle of brown color with the screwed spray dispenser.
1 bottle together with the application instruction is placed in a cardboard pack.

Storage conditions
At a temperature of 8 - 25 ° C.
Keep out of the reach of children.