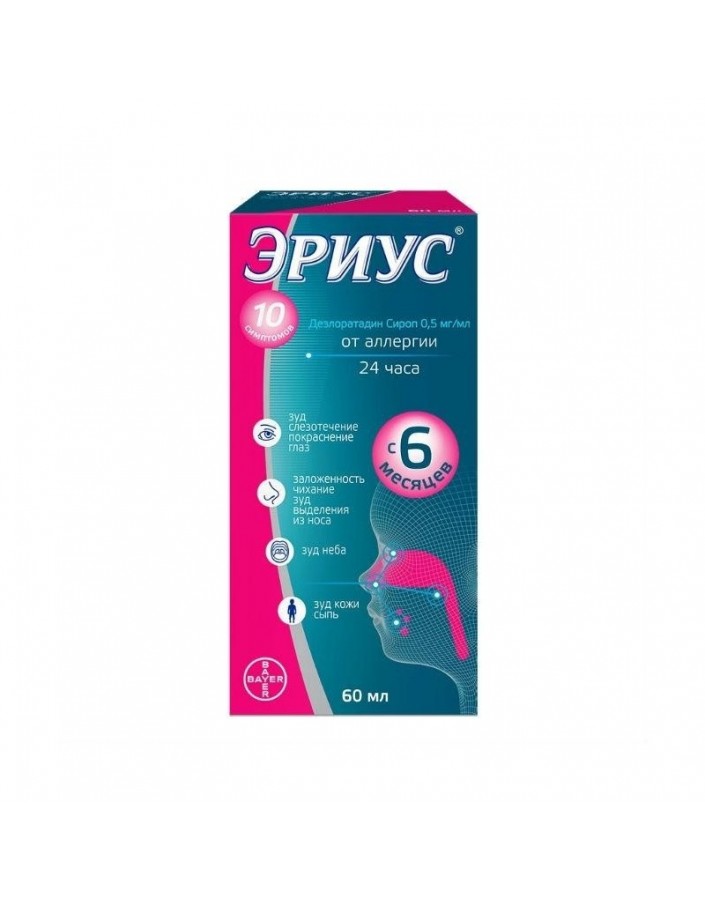 Non-sedative long-acting antihistamine. It is the primary active metabolite of loratadine. Suppresses the release of histamine from mast cells. Inhibits a cascade of reactions of allergic inflammation, including the release of proinflammatory cytokines, including interleukins IL-4, IL-6, IL-8, IL-13, the release of adhesion molecules such as P-selectin. Thus, it prevents the development and facilitates the course of allergic reactions, has antipruritic and anti-exudative action, reduces capillary permeability, prevents the development of tissue edema, and smooth muscle spasm.

The effect of the drug Erius begins within 30 minutes after ingestion and lasts for 24 hours.

Desloratadine is well absorbed in the gastrointestinal tract. Determined in blood plasma 30 minutes after ingestion. The maximum concentration is reached on average 3 hours after ingestion. Does not penetrate the blood-brain barrier. Communication with plasma proteins is 83-87%. When used in adults and adolescents for 14 days at a dose of 5 mg to 20 mg 1 time per day, there is no clinically significant cumulation of the drug. Simultaneous ingestion of food or grapefruit juice does not affect the distribution of desloratadine when used at a dose of 7.5 mg 1 time per day. Desloratadine is not a CYP3A4 and CYP2D6 inhibitor and is not a substrate or P-glycoprotein inhibitor. It is extensively metabolized in the liver by hydroxylation to form 3-OH-desloratadine, coupled with the glucuronide. Only a small part of the ingested dose is excreted by the kidneys (<2%) and through the intestines (<7%) unchanged. The half-life is an average of 27 hours.

Hypersensitivity to desloratadine, other components of the drug or loratadine.

Children age up to 6 months.

Hereditarily transmitted diseases: fructose intolerance, impaired glucose-galactose absorption or insufficiency of sucrase-isomaltase in the body (due to the presence of sucrose and sorbitol in the composition).

Desloratadine is excreted in breast milk, so it is not recommended to use Erius during breastfeeding.

Inside, regardless of meal times, with a small amount of water.

In children aged 2 to 11 years with the use of the drug Erius syrup, the frequency of side effects was the same as with placebo.

When using the drug Erius syrup in adults and adolescents in the recommended dose of 5 mg per day, the frequency of drowsiness was not higher than when using placebo.

on the part of the digestive system: abdominal pain, nausea, vomiting, dyspepsia, diarrhea;

on the part of the cardiovascular system: tachycardia, palpitations;

from the musculoskeletal system: myalgia;

From the skin and subcutaneous tissues photosensitivity is possible.

Symptoms Receiving a dose exceeding the recommended 5 times, did not lead to the appearance of any symptoms. During clinical trials, daily use of desloratadine in a dose of up to 20 mg for 14 days in adults and adolescents was not accompanied by statistically or clinically significant changes in the cardiovascular system.In a clinical pharmacological study, the use of desloratadine at a dose of 45 mg per day (9 times higher than recommended) for 10 days did not cause prolongation of the QT interval and was not accompanied by the appearance of serious side effects.

Treatment. In case of accidental ingestion of a large amount of the drug should immediately consult a doctor. Recommended gastric lavage, taking activated charcoal; if necessary, symptomatic therapy. Desloratadine is not excreted by hemodialysis, the effectiveness of peritoneal dialysis has not been established.

Interaction with other drugs was not detected in studies with Azithromycin, Ketoconazole, Erythromycin, Fluoxetine and cimetidine. Eating does not affect the effectiveness of the drug. Erius does not increase the effect of alcohol on the central nervous system.

The efficacy and safety of the use of the drug Erius syrup in children under the age of 6 months has not been established.

Research on the effectiveness of the drug Erius in rhinitis infectious etiology was not conducted.

Influence on ability to drive vehicles and mechanisms

The potential for side effects such as dizziness and drowsiness should be taken into account. When the described adverse events should refrain from performing these activities.

Syrup 0.5 mg / ml. 30, 50, 60, 100, 120, 150, 225 or 300 ml of syrup in dark glass bottles sealed with polypropylene screw stoppers with polyethylene gaskets having a device to prevent children from opening. On 1 bottle complete with a dosing spoon from transparent plastic or the syringe graduated for measuring the necessary amount of syrup, together with the application instruction in a cardboard pack.

At a temperature not higher than 30 ºС.