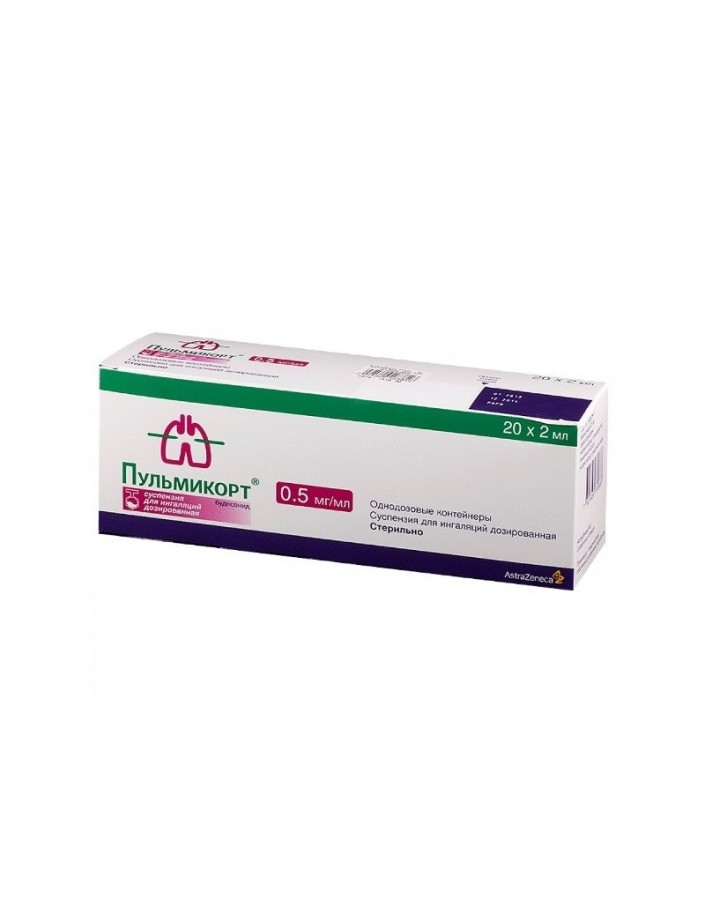 Co-administration of Budesonide and Ketoconazole or other potential inhibitors of CYP3A4 should be avoided. If such a combination is necessary, you should increase the time between taking the drugs to the maximum possible or consider reducing the dose of budesonide.
Particular attention should be paid to patients who are transferred from systemic to inhaled GCS (Pulmicort) in cases where the development of pituitary-adrenal insufficiency can be expected. In such patients, it is necessary to carefully reduce the dose of GCS for systemic use and to monitor the performance of the hypothalamic-pituitary-adrenal system. This category of patients may require additional prescription of GCS for oral administration during stressful situations, in case of injuries, and surgical interventions.
In the transition from taking GCS inwards to the use of Pulmicort, pain in the muscles and joints may develop, which sometimes leads to the need for a temporary increase in the dose of GCS for oral administration. In rare cases, there is a feeling of fatigue, headache, nausea and vomiting, indicating systemic deficiency of GCS.
When switching from GCS for oral administration to inhalation, it is sometimes possible to exacerbate existing allergic reactions, rhinitis and eczema, which were previously stopped by systemic drugs.
To reduce the risk of oral candidiasis in the mouth and throat, the patient should rinse his mouth with water after each inhalation of Pulmicort.
To prevent skin irritation after using a nebulizer with a mask, you should wash your face.
The nebulizer chamber and mouthpiece or mask are washed with warm water using a mild detergent (in accordance with the instructions of the manufacturer). The nebulizer should be well rinsed and dried by connecting the chamber to the compressor or air inlet valve.
The nebulizer chamber should be cleaned after each use.
Use in pediatrics
In children and adolescents receiving GCS (any form) for an extended period, it is recommended to regularly monitor growth rates. When prescribing the corticosteroids, the ratio of the perceived benefits of using the drug and the potential risk of growth retardation should be evaluated.
Influence on ability to drive motor transport and control mechanisms
Pulmicort does not affect the ability to engage in potentially hazardous activities that require increased attention and speed of psychomotor reactions.

There is no established clinically significant interaction of budesonide with other drugs used in the treatment of bronchial asthma.
When co-administered with ketoconazole (at a dose of 200 mg 1 time / day), the plasma concentration of budesonide (taken orally at a dose of 3 mg 1 time / day) increases by an average of 6 times. When taking ketoconazole 12 hours after taking budesonide, the concentration of the latter in plasma increased on average 3 times. It is likely that other potential inhibitors of the CYP3A4 enzyme will cause a significant increase in the plasma level of budesonide.
Pharmaceutical Interaction
The drug Pulmicort can be diluted with a 0.9% solution of sodium chloride, as well as mixed with solutions of terbutaline, Salbutamol, sodium cromoglycate and ipratropium bromide.

With an acute overdose of Pulmicort in the form of a suspension for inhalation, even when using very high doses, there are no clinical problems.
With prolonged use of the drug in doses significantly higher than recommended, it is possible the development of systemic effects of corticosteroids.

GCS for inhalation with pronounced local anti-inflammatory action.
The exact mechanism of action of GCS in the treatment of bronchial asthma is not completely clear. Anti-inflammatory effects, such as inhibiting the release of inflammatory mediators and inhibiting the cytokine-mediated immune response involving T-cells, eosinophils and mast cells, are most important.The affinity of budesonide to GCS receptors is 15 times higher than that of prednisone.
Studies have identified the anti-anaphylactic and anti-inflammatory effect of budesonide, which is manifested in the reduction of bronchial obstruction during early and late allergic reactions.
The prescription of budesonide at the recommended doses did not lead to a clinically significant change in the basal cortisol concentration, as well as plasma plasma cortisol concentration in response to stimulation with ACTH. In healthy patients, after a short administration of budesonide, a dose-dependent decrease in plasma cortisol and urine was observed.
The use of budesonide in a dose of up to 400 mcg / day in children over 3 years of age did not lead to the occurrence of systemic effects. Biochemical signs of the systemic effect of the drug can be observed when using the drug in a dose of from 400 to 800 mg / day. When a dose of 800 mcg / day is exceeded, systemic effects of the drug are common.
The use of GCS in bronchial asthma can cause growth impairment. The results of observations of children and adolescents who received budesonide for a long period (up to 11 years) showed that the growth of patients reached the expected standard indicators.
The use of Pulmicort is effective for asthma physical effort.

Hypersensitivity to the components of the drug Pulmicort.

Use of the drug during pregnancy is possible only in the case when the intended benefit to the mother outweighs the potential risk to the fetus. If necessary, use Pulmicort prescribed in the minimum effective dose.
resultsexperimental studies on animals showed that GCS can cause abnormal development of the fetus. However, there are no clinical data on the increase in the incidence of anomalies in the fetus during the use of budesonide in recommended doses during pregnancy.
Data on the allocation of budesonide with breast milk are not available.

The dose of the drug Pulmicort set individually. In the event that the recommended dose does not exceed 1 mg / day, the entire dose of the drug is administered at a time. When used in a higher dose, the drug is recommended to be administered twice.
The initial dose for adults (including elderly patients) is 1-2 mg / day.
Maintenance dose is 0.5-4 mg / day. In case of severe exacerbations, the dose may be increased.
For children aged 6 months and older, the recommended initial dose is 0.25-0.5 mg / day. If necessary, the dose can be increased to 1 mg / day.
Maintenance dose is 0.25-2 mg / day.