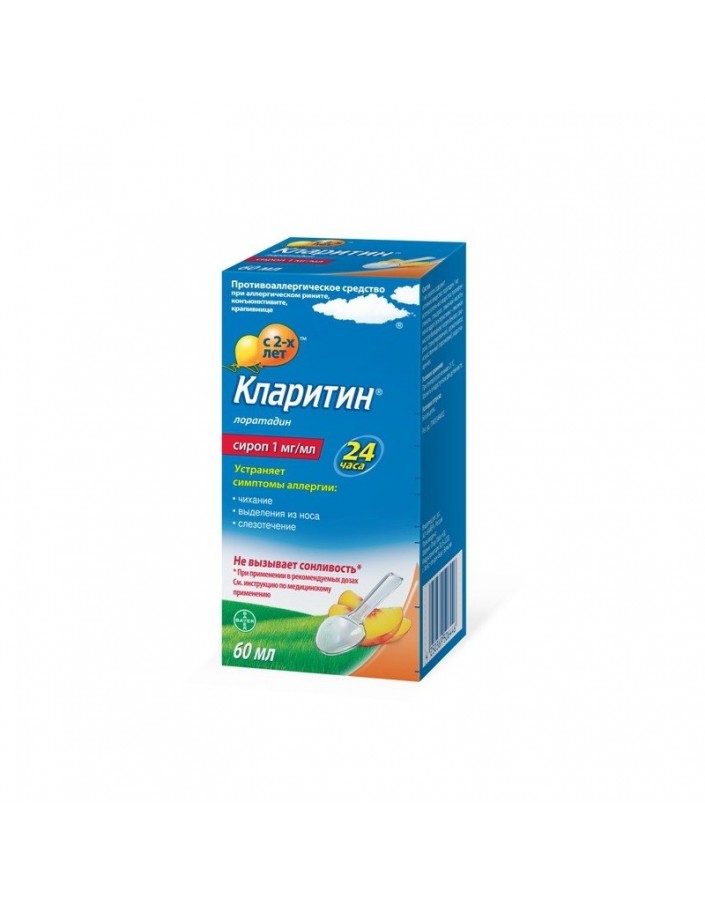 Transparent colorless or yellowish syrup that does not contain visible particles.

Pharmacodynamics Loratadine, the active substance of the drug Claritin®, is a tricyclic compound with a pronounced antihistamine effect and is a selective blocker of peripheral H1-histamine receptors. It has a fast and long anti-allergic effect. Onset of action - within 30 minutes after taking the drug Claritin® inside. The antihistamine effect reaches a maximum after 8-12 hours from the onset of action and lasts more than 24 hours.

Loratadine does not have significant selectivity for H2-histamine receptors. It does not inhibit the reuptake of norepinephrine and has little effect on the cardiovascular system or the function of the pacemaker.

Loratadine has a high degree (97-99%), and its active metabolite is a moderate degree (73-76%) of binding to plasma proteins.

The bioavailability of loratadine and its active metabolite is dose-dependent.

The pharmacokinetic profiles of loratadine and its active metabolite in adult and elderly healthy volunteers were comparable.

Hemodialysis in patients with chronic renal insufficiency does not affect the pharmacokinetics of loratadine and its active metabolite.

Seasonal (pollinosis) and perennial allergic rhinitis and allergic conjunctivitis - elimination of symptoms associated with these diseases - sneezing, itching of the nasal mucosa, rhinorrhea, burning sensation and itching in the eyes, tearing.

Hypersensitivity to loratadine or any other component of the drug.

Children age up to 2 years.

Patients with deficiency of sucrase / isomaltase, fructose intolerance, glucose-galactose malabsorption - due to the presence of sucrose, which is part of the syrup.

Pregnancy (see section “Use during pregnancy and during breastfeeding”).

The safety of loratadine during pregnancy has not been established. Use of the drug Claritin® in pregnancy is possible only after consulting a doctor if the intended benefit to the mother outweighs the potential risk to the fetus.

Loratadine and its active metabolite are excreted in breast milk, therefore, when prescribing a drug during breastfeeding, the issue of discontinuing breastfeeding should be resolved.

Inside, regardless of meal times.

For adults, including the elderly, and adolescents over the age of 12, it is recommended to take Claritin® at a dose of 10 mg (2 teaspoons (10 ml) of syrup) 1 time per day.

With the use of the drug in elderly patients and in patients with chronic renal failure, dose adjustment is not required.

For children At the age of 2 to 12 years, the dose of Claritin® is recommended to be prescribed depending on body weight:

In clinical studies involving children aged 2 to 12 years, taking the drug Claritin® more often than in the placebo group (“dummy”), there was a headache (2.7%), nervousness (2.3%), fatigue (one %).

In clinical trials involving adults, adverse events that were observed more frequently than with placebo were seen in 2% of patients taking Claritin®.In adults, when using the drug Claritin® more often than in the placebo group, headache (0.6%), drowsiness (1.2%), increased appetite (0.5%) and insomnia (0.1%) were noted. In addition, in the post-marketing period there were very rare reports (<1/10 000) about dizziness, fatigue, dry mouth, gastrointestinal disorders (nausea, gastritis), allergic reactions in the form of rash, anaphylaxis, including angioedema, alopecia, abnormal liver function, palpitations, tachycardias, and convulsions.

In case of overdose, you should immediately consult a doctor.

Loratadine is not excreted by hemodialysis. After providing emergency care, it is necessary to continue monitoring the patient's condition.

Eating does not affect the effectiveness of Claritin®.

The drug Klaritin® does not strengthen action of alcohol on the central nervous system.

When loratadine was co-administered with Ketoconazole , Erythromycin , or cimetidine, plasma concentrations of loratadine increased, but this increase was not clinically significant, including according to electrocardiography.

Taking Claritin® should be discontinued 48 hours before skin tests, as antihistamine medications may distort the results of a diagnostic study.

No negative effect of the drug Claritin® on the ability to drive a car or perform other activities requiring high concentration of attention was detected.

However, in very rare cases, some patients experience drowsiness while taking Claritin®, which may affect their ability to drive and work with machinery.

At a temperature not higher than 25 ° C. Keep out of the reach of children.