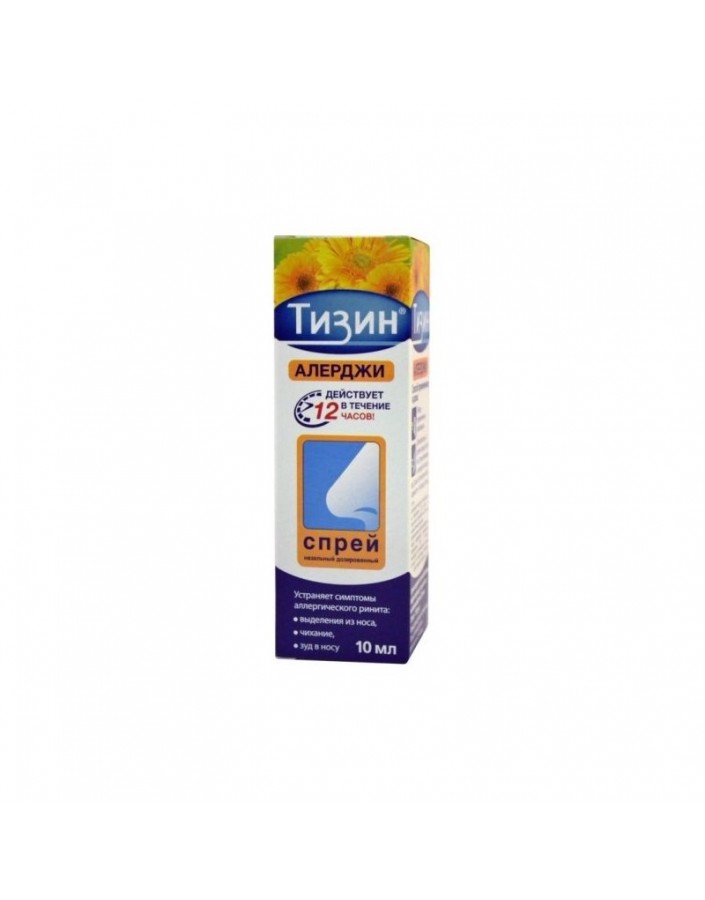 Intranasally administered adults and children over 6 years 2 doses (100 mcg) in each nasal passage 2 times / day. Use of the drug should be continued until symptoms are eliminated. With more severe symptoms, the drug can be used 3-4 times / day.

The patient should be warned about the need to clear the nasal cavity before using the spray and inhale through the nose during the injection.

Before first use, remove the protective cap and repeatedly press the spray nozzle until a mist appears. The bottle is ready for further use. Drug inhale through the nose.

Shake the bottle before each use.

Adverse events reported in ≥1% of patients during clinical trials

From the digestive system: nausea.

Other: fatigue, pain at the injection site.

From the side of the respiratory system: short-term local irritation, pain at the injection site, dryness, burning sensation, discomfort in the nasal cavity.

Other: infrequently - indisposition; frequency is unknown - swelling of the eyelids.

WITH caution It should be prescribed to patients with impaired renal function and elderly patients.

Reliable data on the use of nasal spray Tizin ® Alergi in pregnant women are absent.Therefore, the drug should not be used during pregnancy unless the intended benefit to the mother justifies the potential risk to the fetus.

Based on the determination of the concentration of levocabastin in the saliva and breast milk of lactating women who received 0.5 mg of levocabastin once inside, it is expected that approximately 0.6% of the total intranasal dose of levocabastin can be administered to the baby during breastfeeding. If necessary, the appointment of the drug during lactation should stop breastfeeding.

WITH caution It should be prescribed to patients with impaired renal function.

Do not use for children under 6 years old.

The drug in the recommended dose usually does not have a clinically pronounced sedative effect and does not reduce the speed of the reaction compared with placebo. In the case of drowsiness in the use of the drug should not engage in potentially hazardous activities that require increased attention and speed of psychomotor reactions.

The patient should be informed that if the drug has become unusable or the expiration date has expired, then it should not be thrown into the wastewater or on the street. It is necessary to put the drug in the bag and put it in the trash. These measures will help protect the environment.

No reports of overdose of levocabastine have been reported.

Treatment: if ingested, the patient should drink a large amount of fluid to speed up the release of levocabastine by the kidneys.