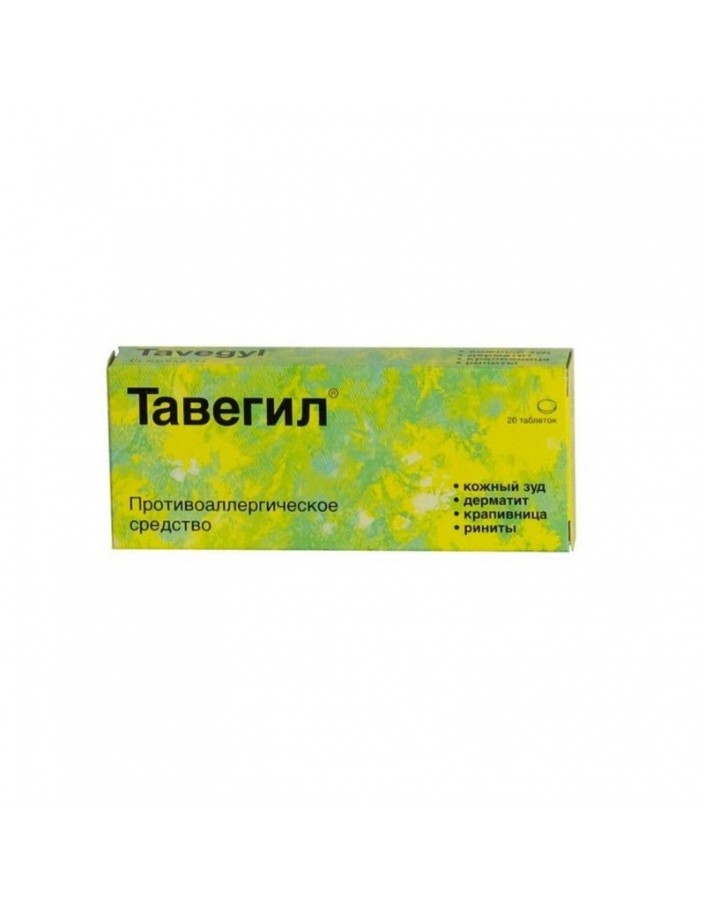 Inside adults and children over 12 years old appoint 1 tab. (1 mg) in the morning and in the evening. In cases difficult to treat, the daily dose may be up to 6 tab. (6 mg).

Tablets should be taken before meals with water.

Respiratory: rarely - a thickening of the bronchial secretion and difficulty in the separation of sputum, a feeling of pressure in the chest and difficulty breathing, nasal congestion.

- diseases of the lower respiratory tract (including bronchial asthma);

- simultaneous use of MAO inhibitors;

WITH caution Tavegil should be used® in patients with stenosing gastric ulcer, with pyloroduodenal obstruction, with bladder neck obstruction, and prostatic hypertrophy, accompanied by urinary retention, with increased intraocular pressure, hyperthyroidism, diseases of the cardiovascular system (including arterial hypertension).

Use of the drug Tavegil is contraindicated® during pregnancy and lactation (breastfeeding).

To prevent distortion of the results of skin scarification tests for allergens, the drug should be canceled 72 hours before the allergic testing.

The pills contain lactose, so the drug is not recommended for patients suffering from rare congenital diseases associated with galactose intolerance, severe lactase deficiency and impaired glucose-galactose absorption.

Tavegil® in pill form is contraindicated in children under 6 years old. For treatment of children from 1 year you can apply Tavegil® in the form of a solution for in / in and in / m administration.

Clemastine has a slight sedative effect (low to moderate in intensity), so patients who take Tavegil®It is recommended to refrain from driving vehicles, working with mechanisms, as well as from other activities that require increased attention and speed of psychomotor reactions.

Symptoms: An overdose of antihistamines can lead to both oppressive and stimulating effects on the central nervous system. CNS stimulation is more common in children. Manifestations of anticholinergic action may also develop: dry mouth, fixed pupil dilation, rush of blood to the upper half of the body, disorders of the gastrointestinal tract (nausea, epigastric pain, vomiting).

Treatment: if a patient does not have vomiting spontaneously, then it should be artificially called (only if the patient’s mind is preserved).If 3 hours or a little more has passed since taking the drug, you can wash the stomach with an isotonic solution of sodium chloride. You can also prescribe a saline laxative. Symptomatic therapy is also indicated.

Incompatible with the simultaneous use of MAO inhibitors.

The drug in the form of pills approved for use as a means of non-prescription.