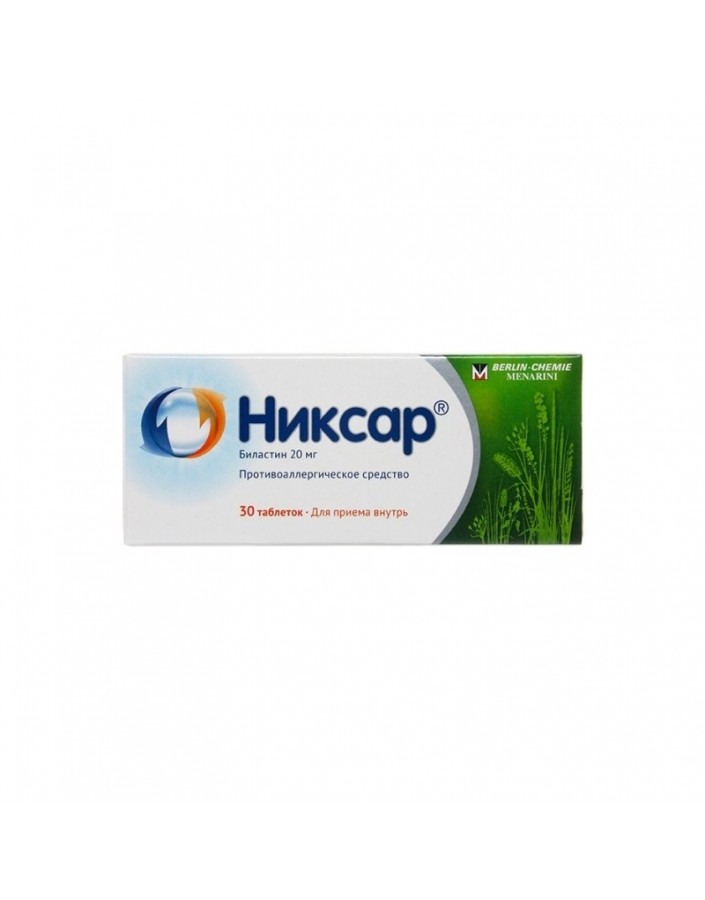 Pharmacodynamics:
Bilustin is a long-acting antihistamine that selectively blocks peripheral H1 receptors.
A significant therapeutic effect is observed an hour after taking the drug, the antihistamine effect persists for 24 hours.
A slight penetration of bilastin through the blood-brain barrier is possible, but bilastin does not have a significant effect on the central nervous system and does not cause a sedative effect.
It has no anticholinergic action. Elongation of the QT interval on the ECG is not observed.

Suction. After ingestion, bilastin is rapidly absorbed from the gastrointestinal tract. The time to reach the maximum plasma concentration (TCmax) is 1.3 hours. The bioavailability of orally ingested bilastin is 61%. Simultaneous food intake reduces the bioavailability of bilastin by 30%. Cumulation of the drug is not observed. Communication with plasma proteins - 84-90%.
Metabolism and excretion. Bilustin is metabolized slightly, after a single use up to 95% of bilastin from the accepted dose is excreted unchanged by the kidneys (28.3%) and with bile (66.5%). The half-life (T1 / 2) averages 14.5 hours.
In case of moderate renal failure (glomerular filtration rate (GFR) 30-50 ml / min / 1.73 m2) and severe severity (GFR <30 ml / min / 1.73 m2), the elastin elimination rate slows down, which can lead to to an increase in plasma concentration of bilastin. Changing the pharmacokinetic parameters does not affect the safety profile of bilastin, since the concentration of bilastin in the blood plasma in patients with renal insufficiency remains within acceptable limits.
In hepatic insufficiency, clinically significant changes in pharmacokinetic parameters of bilastin do not occur, since bilastin is slightly metabolized in the liver.
The pharmacokinetic parameters of bilastin in elderly patients are similar to those in young patients.

- Allergic (seasonal and year-round) rhinoconjunctivitis: elimination or relief of symptoms (sneezing, nasal congestion, itching of the nasal mucosa, rhinorrhea, burning sensation and itching in the eyes, redness of the eyes, tearing);
- urticaria: elimination or reduction of pruritus, rash.

- Hypersensitivity to bilastine or auxiliary components of the drug;
- age up to 12 years (efficacy and safety have not been established);
- pregnancy and breastfeeding period.

Inside
Unless otherwise prescribed by a doctor, the following doses of Nixar are recommended to relieve symptoms of allergic rhinoconjunctivitis and urticaria:
Adults and children over 12 years old: 1 pill of the drug Nixar, which corresponds to 20 mg of bilastin, once a day.
The maximum daily dose of bilastin is 20 mg, since increasing the dose does not lead to an increase in the therapeutic effect.
A pill is taken one hour before meals or 2 hours after a meal (or fruit juice).
In allergic rhinoconjunctivitis, the drug is used during the entire period of contact with allergens.
For urticaria, treatment is continued until the symptoms disappear or relieve.
In patients with impaired liver and kidney function, dose adjustment is not required.
Elderly patients dose adjustment is not required. Experience with the use of the drug Nixar® in persons over 65 years is insignificant.

Symptoms: when applying bilastina in a dose that exceeds the recommended 10-11 times, side effects occurred 2 times more often than when using placebo. The most common symptoms were dizziness, headache, nausea. No serious side effects, including significant lengthening of the QT interval, were noted.
Treatment: symptomatic and supportive therapy. There is no specific antidote.

In patients with moderately severe renal failure (GFR 30-50 ml / min / 1.73 m2) and severe severity (GFR <30 ml / min / 1.73 m2), concurrent use with P-glycoprotein inhibitors may lead to an increase in bilastin concentration in blood plasma, which increases the risk of side effects. In this regard, in patients with moderate to severe renal failure, caution should be exercised with simultaneous use of bilastin with P-glycoprotein inhibitors (ketoconazole, erythromycin, cyclosporine, ritonavir, diltiazem, etc.).

Impact on the ability to drive trans. Wed and fur .:

In a study conducted to assess the effect of bilastin at a dose of 20 mg on the ability to drive vehicles, the negative effect of the drug was not identified. However, patients should be warned that in very rare cases, dizziness or drowsiness may occur, which in turn may affect the ability to drive vehicles or to perform other activities that require increased concentration of attention. When the described adverse events should refrain from performing these activities.