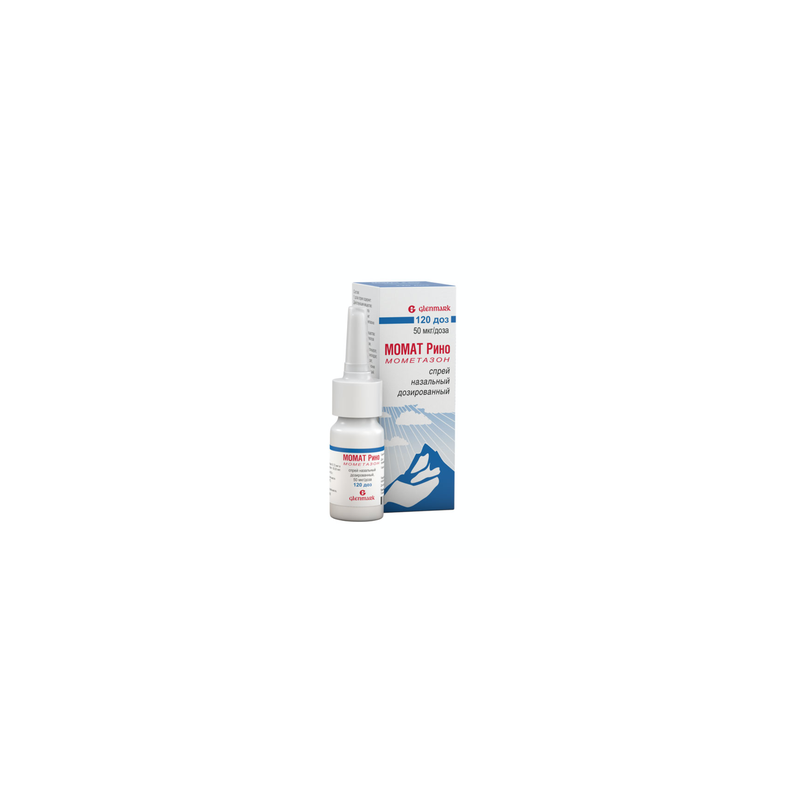 Mometasone is a synthetic glucocorticosteroid (GCS) for topical use. It has anti-inflammatory and anti-allergic effects when used in doses that do not cause systemic effects. Slows down the release of inflammatory mediators. It increases the production of lipomodulin, which is an inhibitor of phospholipase A, which causes a decrease in the release of arachidonic acid and, accordingly, inhibition of the synthesis of products of the metabolism of arachidonic acid - cyclic endoperexia, prostaglandins. It warns the regional accumulation of neutrophils, which reduces inflammatory exudate and production of lymphokines, inhibits the migration of macrophages, leads to a decrease in the processes of infiltration and granulation. Reduces inflammation by reducing the formation of chemotaxis substance (the effect on late allergy reactions), inhibits the development of an immediate type of allergic reaction (due to inhibition of the production of arachidonic acid metabolites and reduced release of inflammatory mediators from mast cells).

With intranasal use, the mometasone furoate systemic bioavailability is <1% (with a detection method sensitivity of 0.25 pg / ml). The mometasone suspension is very poorly absorbed in the gastrointestinal tract, and the small amount of mometasone suspension that can enter the gastrointestinal tract after nasal inhalation undergoes an active primary metabolism even before excretion with urine or bile.

Adverse events associated with the use of the drug (? 1%), detected during clinical trials in patients with allergic rhinitis or nasal polyposis, and during the post-registration use of the drug,regardless of indications for use are presented below. Undesirable reactions are listed in accordance with the classification of the system-organ class, unwanted reactions are classified by frequency of occurrence. Nosebleeds, as a rule, were moderate and stopped on their own, the frequency of their occurrence was slightly higher than when using placebo (5%), but equal to or less than when other nasal GCS were prescribed, which were used as active controls (in some of their incidence of nosebleeds was up to 15%). The incidence of all other adverse events was comparable to the frequency of their occurrence when placebo was prescribed.

Violations of the nervous system - often - a headache.

Violations of the organ of vision - the frequency is not installed - increased intraocular pressure, glaucoma, cataracts.

Disturbances of the respiratory system, organs of the chest and mediastinum: nosebleeds (6%), irritation of the nasal mucosa (2%), sneezing (2%).

The incidence of these adverse events in children was comparable to the frequency of their occurrence with placebo.

With the use of intranasal corticosteroids, the development of systemic side effects is possible, especially with prolonged use in high doses.

With prolonged use of GCS in high doses, as well as with the simultaneous use of several GCS, it is possible to suppress the function of the hypothalamic-pituitary-adrenal system. Due to the low systemic bioavailability of the drug (<1%, with a sensitivity of the method of determination of 0.25 pg / ml), it is unlikely that in case of an accidental or deliberate overdose, you will need to take any measures other than observation with possible subsequent resumption of the drug at the recommended dose.

As with any long-term treatment, patients using Moen Rino's nasal spray for several months or longer should periodically be examined by a doctor for possible changes in the nasal mucosa and the possible development of systemic side effects. If a local fungal infection of the nose or pharynx develops, it may be necessary to discontinue Momat Rino's nasal spray therapy and conduct special treatment. Persistent irritation of the mucous membrane of the nose and pharynx can also serve as a basis for discontinuing treatment with this drug.

Patients who switch to treatment with Momat Rino nasal spray after long-term therapy with systemic glucocorticosteroids require special attention. Cancellation of systemic-acting glucocorticosteroids in such patients may lead to insufficient adrenal function, the subsequent recovery of which may take up to several months. In case of signs of adrenal insufficiency, you should resume taking systemic corticosteroids and take other necessary measures.

Patients who are treated with glucocorticosteroids have potentially reduced immune reactivity and should be warned about their increased risk of infection if they come into contact with patients with certain infectious diseases (eg, chicken pox, measles), and the need for medical advice if such contact occurs..

If signs of severe bacterial infection appear (for example, fever, persistent and sharp pain on one side of the face or toothache, swelling in the orbital or periorbital area), immediate medical consultation is required.

The efficacy and safety of mometasone has not been studied in the treatment of unilateral polyps of irregular shape, bleeding polyps, polyps associated with cystic fibrosis and polyps that completely cover the nasal cavity. Unilateral polyps that are irregularly shaped or bleeding should be further examined.

With prolonged use of nasal GCS in high doses may develop systemic side effects. The likelihood of these effects is much less than with the use of systemic corticosteroids, and may vary in individual patients, as well as between different corticosteroids. Potential systemic effects include Cushing's syndrome, characteristic signs of cushingoid, suppression of adrenal function, growth retardation in children and adolescents, cataracts, glaucoma and, rarely, a number of psychological or behavioral effects, including psychomotor hyperactivity, sleep disturbance, anxiety, depression or aggression (especially in children).

It is recommended to regularly monitor the growth of children receiving long-term therapy with mometasone. When growth is slowed down, ongoing therapy should be reviewed in order to reduce the dose of mometasone to the minimum effective dose to control symptoms of the disease. In addition, the patient should be referred for consultation to the pediatrician.

Treatment of corticosteroids with higher doses than recommended can lead to clinically significant inhibition of adrenal function.If it is known that high doses of corticosteroids are used, it is necessary to consider the possibility of additional use of systemic corticosteroids during periods of stress or planned surgery.

Influence on ability to drive vehicles and engage in other activities

• A recent surgery or injury of the nose with damage to the nasal mucosa - until the wound heals (due to the inhibitory effect of the SCS on the healing process).

Tuberculosis infection (active and latent) of the respiratory tract, untreated fungal, bacterial, systemic viral infection or infection caused by Herpes simplex with eye damage (as an exception, the drug may be prescribed for the listed infections as directed by the doctor), the presence of untreated local infection with involvement in the process mucous membrane of the nasal cavity.

Appropriately planned and well-controlled studies of the drug in pregnant women have not been conducted.

As with the use of other nasal GCS, Momat Rino should be administered to pregnant or lactating breasts only if the expected benefit from the administration of the drug justifies the potential risk to the fetus or infant.

Infants whose mothers received GCS during pregnancy should be carefully examined for possible adrenal hypofunction.

Combination therapy with loratadine is well tolerated by patients. However, no effect of the drug on the plasma concentration of loratadine or its main metabolite is noted.