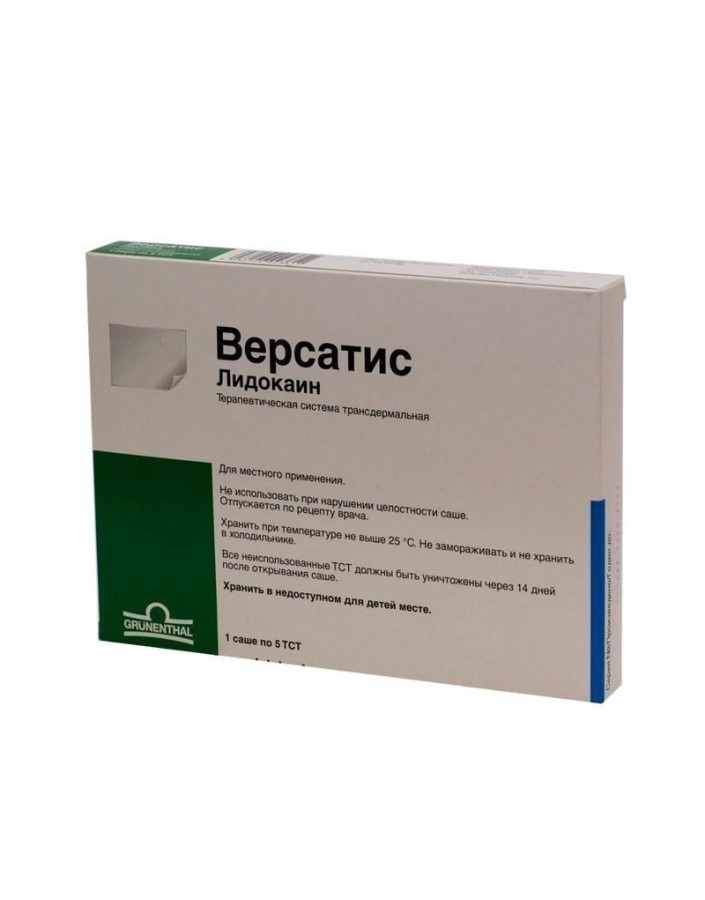 Versatis is a local analgesic drug containing a local anesthetic - lidocaine, an acetamide derivative. Possesses membrane stabilizing activity, causes the blockade of sodium channels of the excitable membranes of neurons. When applied topically, it does not irritate the tissue, in recommended doses it does not affect myocardial contractility and does not slow down AV conductivity.When applied topically on intact skin, a therapeutic effect occurs, sufficient to relieve pain, without the development of a systemic effect.

TTS Versatis is intended for local use, it should be pasted on the skin to cover the painful surface above the lesion. After applying the system, avoid contact of hands with eyes; hands should be washed immediately.

TTC can be on the skin for 12 hours. Then TTC is removed and a 12-hour break is taken. You can stick up to three TTS at the same time.

If during the period of application of TTS there is a burning sensation or redness of the skin, it is necessary to remove the system and not to apply TTS until the redness disappears.

Used systems should be destroyed immediately after use, should be stored out of the reach of children or pets.

Violation of the integrity of the skin in the place of imposition TTC;
Increased sensitivity to TTC components.

Carefully used for infectious or traumatic skin lesions at the site of application, for acute diseases, in debilitated patients, in children under 2 years of age and in elderly people.

Versatis should not be used during pregnancy and lactation (breastfeeding).

Treatment: at the first signs of intoxication (dizziness, nausea, vomiting, euphoria), the further use of TTC is stopped. The patient should be given a horizontal position. Assign oxygen inhalation; in bradycardia - m-anticholinergics (atropine), vasoconstrictor agents (norepinephrine, phenylephrine).

Simultaneous use with antiarrhythmic drugs increases the risk of developing the toxic effects of lidocaine. MAO inhibitors enhance the local anesthetic effect of lidocaine.

Keep out of reach of children at a temperature not exceeding 25 ° C.