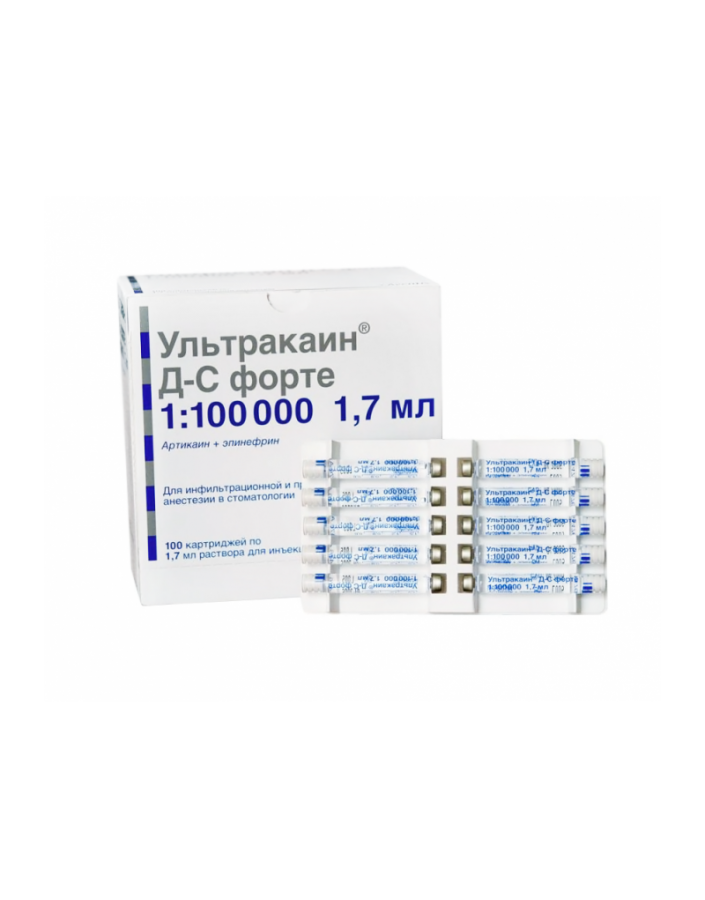 The drug Ultracain® D-S forte, used for natural infiltration and conduction anesthesia in tomato, is a combination drug, which includes articaine (amide-type local anesthetic contingency) and epinephrine (adrenaline) a vasoconstrictor). Epinephrine is added to the rest of the drug to prolong the action of non-aesthesia.

Artikain has a local anesthetic effect due to the blockade of potential-dependent sodium channels in the cell membrane of neurons, which leads to a reversible inhibition of the conduction of impulses along the nerve fiber and a reversible loss of sensitivity.The drug Ultracain® D-C Forte has a fast (latency period from 1 to 3 min) and a strong anesthetic effect and has good tissue tolerance. The duration of anesthesia is at least 75 minutes.

In a clinical study involving 210 children aged from 3.5 to 16 years, the use of Ultracain® DR-Forte at a dose of 7 mg / kg body weight provided a sufficient local anesthetic effect during mandibular infiltration or maxillary conduction anesthesia. The duration of anesthesia was comparable in all age groups and depended on the amount of the drug administered.

Artikain is rapidly and practically immediately after administration, it is metabolized (by hydrolysis) by nonspecific plasma esterases in tissues and blood (90%);

the remaining 10% of the dose of articaine is metabolized by microsomal liver enzymes. The articaine's main metabolite, articaic acid, which is formed during this process, does not have local anesthetic activity and systemic toxicity, which allows repeated administration of the drug.

Artikain is excreted through the kidneys, mainly in the form of articaic acid.After submucosal administration, the half-life is approximately 25 minutes.

Artikain penetrates the placental barrier, practically does not stand out with breast milk.

It is indicated for local anesthesia (infiltration and conduction anesthesia) in dentistry during traumatic interventions and, if necessary, pronounced hemostasis or improvement of visualization of the surgical field: dental operations on the mucous membrane or bones, which require the creation of more pronounced ischemia; operations on the dental pulp (amputation or extirpation); removal of a broken tooth (osteotomy) or a tooth affected by apical periodontitis; long surgical interventions; percutaneous osteosynthesis; excision of cysts; interventions on the gingival mucosa; resection of the apex of the tooth root.

- Children's age up to 4 years (lack of sufficient clinical experience).

- Simultaneous use of non-cardio selective beta-blockers, for example, propranolol (risk of hypertensive crisis and severe bradycardia).

- In patients with cerebrovascular disorders, history of stroke.

- In patients with chronic bronchitis, emphysema.

- In patients with diabetes mellitus (potential risk of changes in glucose concentration in the blood).

- In patients with cholinesterase deficiency (use is possible only if absolutely necessary, since prolongation and a pronounced increase in the action of the drug are possible).

- In patients with bleeding disorders.

- In patients with severe impaired liver and kidney function.

- In patients with marked arousal.

- In patients with epilepsy in history.

- When combined with halogen-containing agents during inhalation anesthesia (see section "Interaction with drugs").

Due to the lack of clinical data, the decision on the use of the drug by the dentist can be made only if the potential benefit of its use for the mother justifies the potential risk to the fetus. If you need to use articaine during pregnancy, it is better to use drugs that do not contain epinephrine, or with a lower concentration of epinephrine (that is, drugs Ultrakain® D and Ultrakain® DS-C). In case of accidental intravascular administration, epinephrine may reduce the blood supply to the uterus.

With short-term use of the drug during the breastfeeding period, as a rule, it is not necessary to interrupt breastfeeding, since no clinically significant concentrations of articaine and epinephrine are found in breast milk.

The drug is intended for use in the oral cavity and can be administered only in tissues where there is no inflammation.

The decision about when the patient after dental surgery can return to driving and other potentially hazardous activities that require increased concentration and psychomotor speed must be taken by a doctor.

At a temperature not higher than 25 ° С in the place protected from light.

At a temperature not higher than 30 ° C in a dark place.

Keep the drug out of the reach of children.

After the expiration date of the drug can not be used.