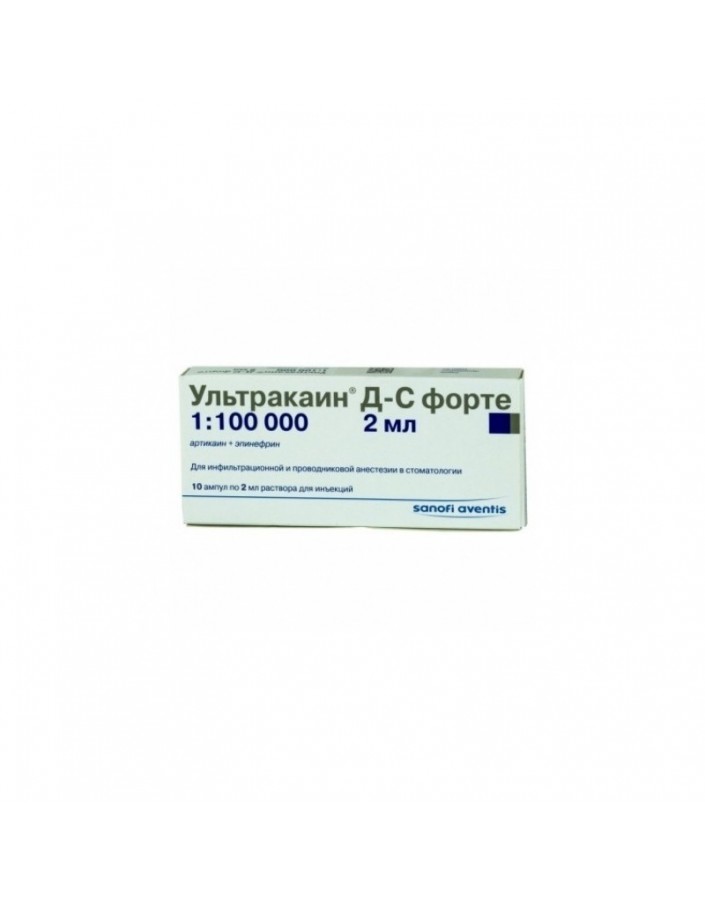 Combined preparation for local anesthesia in dentistry. The articaine in its composition is a local anesthetic of the amide type of the thiafen group.
The action of the drug Ultracain D-S begins quickly - after 1-3 minutes. The duration of anesthesia is at least 75 minutes. Wound healing proceeds without complications, which is caused by good tissue tolerance and minimal vasoconstrictor action.
Due to the low content of adrenaline in the drug Ultracain DS, its effect on the cardiovascular system is not very pronounced: there is almost no increase in blood pressure and an increase in heart rate. The drug has low toxicity.

The dose of Ultracain D-S is set individually, taking into account the severity and duration of the surgical intervention.
When performing a single treatment procedure, adults can enter up to 7 mg of articaine per 1 kg of body weight. A dose of up to 500 mg (that is, 12.5 ml of injection solution) is well tolerated when an aspiration test is performed prior to the injection of Ultracain D-C to eliminate the possibility of intravascular administration. For its implementation the most suitable is the syringe "unidzhekt K". Injection pressure must match the sensitivity of the tissue.

From the side of the central nervous system: depending on the dose applied, the following cases are described: impairment of consciousness up to its loss; impaired breathing until it stops; muscle tremor, involuntary muscle twitching, sometimes progressive to generalized seizures; nausea, vomiting.
On the part of the organ of vision: seldom - blurred eyes, transient blindness, diplopia.
Cardiovascular: moderately expressed hemodynamic disorders, manifested by a decrease in blood pressure, tachycardia or bradycardia.
Allergic reactions: skin redness, itching, conjunctivitis, rhinitis, angioedema of varying severity; rarely - anaphylactic shock.
Local reactions: swelling or inflammation at the injection site of Ultracain D-C.
Other: often - headaches, probably associated with the presence in the composition of the drug adrenaline.
Other side effects caused by the action of adrenaline (tachycardia, arrhythmia, increased blood pressure), occur extremely rarely at low - 1: 200 000 (0.5 mg / 100 ml) and 1: 100 000 (1 mg / 100 ml) adrenaline concentrations.
In some cases, an accidental intravascular injection can lead to the development of ischemic zones at the injection site of Ultracain DS, sometimes progressing to tissue necrosis.
Damage to the facial nerve until the development of paralysis of the facial nerve occurs only when the injection technique is disturbed.

If necessary, infiltration and conduction anesthesia during dental operations during pregnancy should be given to Ultracain D-C, due to the lower content of adrenaline in its composition.
If necessary, the use of the drug during lactation is not necessary to interrupt breastfeeding, because active substances are not excreted in breast milk in clinically significant quantities.

When the first signs of the development of a side effect or toxicity (dizziness, motor restlessness, impaired consciousness) appear, it is urgent to stop the injection and give the patient a horizontal position.

When tachycardia, bradycardia, or a pronounced decrease in blood pressure, the patient should be given a horizontal position with the legs elevated. Careful monitoring of hemodynamic parameters (pulse, blood pressure) and airway is required. Even if the symptoms do not seem to be severe, everything necessary for IV infusion should be prepared and, at the very least, venipuncture.

Depending on the degree of respiratory failure, oxygen should be given, artificial respiration (“mouth to nose”) and, if necessary, endotracheal intubation with controlled ventilation of the lungs should be given.
The use of analeptic drugs centrally contraindicated.

In involuntary muscular twitching or generalized convulsions, intravenous barbiturates of short or ultrashort action are indicated. Administration should be slow, under constant monitoring of hemodynamic and respiratory parameters. At the same time should be carried out in / in the infusion of fluid through a pre-installed cannula.

In severe circulatory disorders and shock, the injection of ULTRACAINE D-C should be stopped, the patient should be in a horizontal position with raised legs, oxygen inhalation and IV infusion of balanced electrolyte and plasma-substituting solutions should be given in / into glucocorticoids (250-1000 mg of methylpredisolone).

In the case of a threatening vascular collapse and increasing bradycardia, inject 25-100 mcg of adrenaline intravenously (0.25-1 ml of a solution with a concentration of 100 mcg / ml). The introduction is carried out slowly, under the control of the pulse and blood pressure. Do not enter more than 100 micrograms of adrenaline (1 ml of solution) for 1 time. If necessary, the introduction of additional quantities of adrenaline, it should be added to the infusion solution. The rate of infusion should be correlated with heart rate and blood pressure levels.

Severe forms of tachycardia and tachyarrhythmias can be eliminated using antiarrhythmic drugs, but non-selective beta-blockers should not be used. In these cases, the use of oxygen and control of hemodynamic parameters are necessary.

With an increase in blood pressure in patients with arterial hypertension, peripheral vasodilators should be used, if necessary.

The drug Ultracain D-S can not be administered in / in.
It is impossible to carry out an injection in the area of ​​inflammation.

Hypersensitivity to sulfites is more often observed in patients with bronchial asthma.

In patients with cholinesterase deficiency, Ultracain D-S can only be used for urgent reasons, since in these patients there is a possibility of prolongation and sometimes enhancement of the effect of the drug.

Patients with diseases of the cardiovascular system (chronic heart failure, a pathology of coronary vessels, angina pectoris, arrhythmias, myocardial infarction, arterial hypertension), cerebrovascular disorders, the presence of paralysis in history, chronic bronchitis, emphysema, diabetes, hyperthyroidism, and also in the presence of expressed concern, it is advisable to use Ultracain D-C, which contains less adrenaline.

The use of an appropriate syringe ("Unidzector K" for infiltration anesthesia and "Ultrajack K" for intraligamentary anesthesia) provides maximum protection against possible breakage of the glass and softness of functioning.
Damaged cartridges should not be used. Partially used cartridges cannot be used to treat other patients (due to the risk of developing hepatitis).

Influence on ability to drive motor transport and control mechanisms:

Special tests did not reveal a clear effect of the drug on operator activity. However, due to the fact that the patient’s preoperative anxiety and the stress caused by surgery can influence the efficiency of the activity, the dentist must individually in each case decide on the patient’s admission to driving a vehicle or working with mechanisms.

The hypertensive effect of sympathomimetic amines such as adrenaline can be enhanced by tricyclic antidepressants and MAO inhibitors . Interactions of this type are described for epinephrine and norepinephrine when used as vasoconstrictors at concentrations of 1:25 000 and 1:80 000, respectively. Although the concentration of adrenaline in Ultracaine DS (1: 100 000) is much lower, one should nevertheless consider this possibility.
Ultracain D-S should not be prescribed during treatment with non-selective beta-blockers, since in this case there is a high risk of developing hypertensive crisis and severe bradycardia.

In the dark place at a temperature of no higher than 25 ° C, 3 years. injection solution in cartridges - 2.5 years.