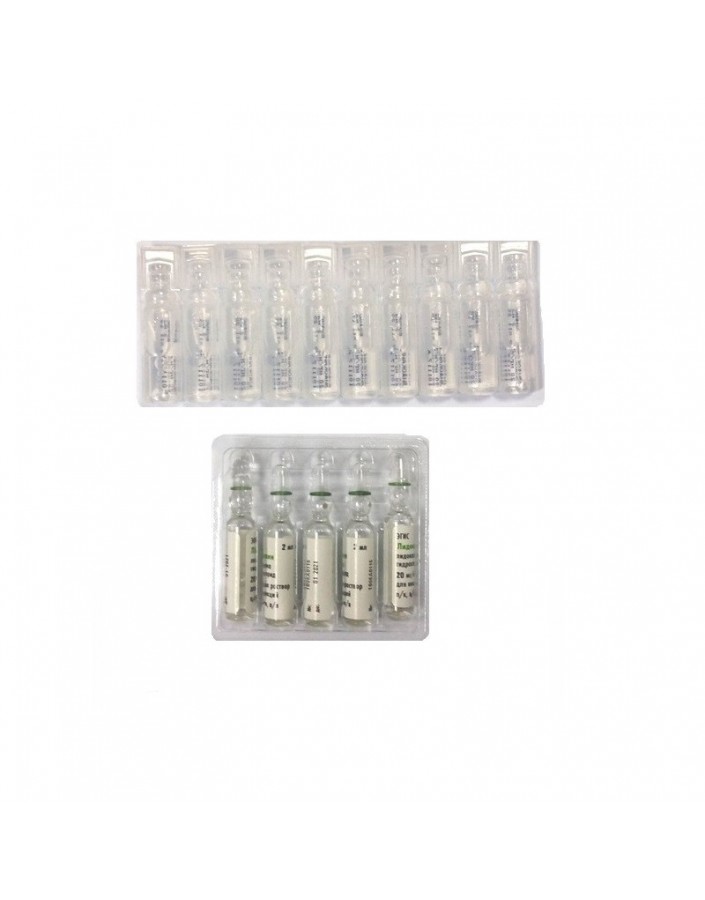 Lidocaine It is a local anesthetic that also has antiarrhythmic activity.

Assign with all types of local anesthesia: infiltration, conductive and superficial. The anesthetic effect of lidocaine hydrochloride is 2-6 times stronger than Novocaine.

The drug blocks the flow of sodium ions in myocardial cells and suppresses the automatism of ectopic foci, acts faster and longer. Reduces the effective refractory period, significantly reduces the amplitude of the action potential of myocardial cells.

It has a weak effect on the electrophysiological properties of the atria and therefore is ineffective with atrial forms of cardiac arrhythmias. The drug has little effect on hemodynamics, only in large doses inhibits myocardial contractility and intracardiac conduction.

With endoscopy and instrumental examinations:

In obstetrics and gynecology:

During pregnancy and breastfeeding is possible if the expected effect of therapy outweighs the potential risk to the fetus and child.

It is used with caution in patients with impaired liver function, circulatory failure, arterial hypotension, renal failure, epilepsy. In these cases, a reduction in the dose of the drug is required.

With rapid intravenous administration, a sharp decrease in blood pressure and the development of collapse can occur.

In these cases, mezaton, ephedrine and other vasoconstrictor agents are used. Lidocaine solutions should be gently injected into highly vascularized tissues to avoid getting the drug into the vessel lumen (for example, in the neck area during thyroid surgery) (in such cases, smaller doses of lidocaine are shown.

With extreme caution should use the drug in the presence of injuries of the mucous membranes, with mental retardation, as well as very old and / or weakened patients who are already receiving drugs such as lidocaine for cardiac problems.

In dentistry and orthopedics, the drug should be used only with elastic impression materials.
Avoid contact with the aerosol or contact with eyes; it is important to prevent the aerosol from entering the respiratory tract (risk of aspiration). Applying the drug on the back of the pharynx requires special care. It should be remembered that lidocaine suppresses the pharyngeal reflex and inhibits the cough reflex, which can lead to aspiration, bronchopneumonia.

Use in pediatrics
It should be borne in mind that in children the swallowing reflex occurs much more often than in adults.
Lidocaine aerosol is not recommended for local anesthesia before tonsillectomy and adenotomy inchildren under the age of 8 years.

Influence on ability to drive motor transport and control mechanisms
If the side effects after use of the drug do not cause discomfort, there are no restrictions for driving vehicles and controlling mechanisms.

Forlocal conduction anesthesia The usual dose is from 5 ml to 10 ml of a 2% solution of lidocaine. Foranesthesia of the brachial and sacral plexus enter 5-10 ml of 2% solution.

Forfinger anesthesia apply from 2 ml to 3 ml of 2% solution. The maximum dose of a 2% Lidocaine solution is 10 ml, this dose should not be re-administered for 24 hours. With local anesthesia, the drug should be injected into highly vascularized tissues carefully to avoid getting into the bloodstream. Before the introduction of lidocaine in high doses, the appointment of barbiturates is recommended.

When applied incardiology administered in / in, a single dose of 1-2 mg / kg of body weight and can be up to 100 mg. This dose can be re-administered every 3-4 minutes to a total dose of 300 mg.

V / m is administered in a dose of 2-4 mg / kg of body weight in the gluteal or deltoid muscle at intervals from 4 h to 6 h. The single dose should not exceed 200 mg.

Atmyocardial infarction Before transporting the patient to the hospital, Lidocaine is injected intramuscularly at a dose of 4 mg / kg as a single prophylactic dose (from 200 to 300 mg maximum).

With the help of a soaked tampon, the preparation can be applied to large surfaces.
Children under 2 years old It is preferable to use the preparation by applying a tampon, which allows you to avoid the fear that appears during spraying, as well as the burning sensation.

For patients with hepatic and / or heart failure A dose reduction of 40% is recommended.

From the side of the central nervous system: headaches, dizziness, drowsiness, anxiety, euphoria, tinnitus, numbness of the tongue and mucous membrane of the mouth, speech and vision problems are possible.

Local reactions: feeling of light burning, which disappears as the anesthetic effect develops (within 1 min).

It is undesirable to combine lidocaine with the following drugs:

With beta-blockers due to the enhanced toxic properties of lidocaine, with digitoxin due to a weakening of the cardiotonic effect, with curariform drugs, muscle relaxation is enhanced.

It is unreasonable to prescribe lidocaine together with aymalin, Amiodarone , Verapamil or quinidine due to increased cardiodepressive action.

The combined use of lidocaine and procainamide can cause excitation of the central nervous system, hallucinations.

With intravenous administration of hexenal or thiopental sodium, against the background of the action of lidocaine, respiratory depression is possible.

Under the influence of MAO inhibitions, the local anesthetic action of lidocaine is likely to increase. Patients taking MAO inhibitors should not be given lidocaine parenterally.

With the simultaneous appointment of lidocaine and polymyxin-B may increase the inhibitory effect on neuromuscular transmission, so in this case it is necessary to monitor the respiratory function of the patient.

With simultaneous use of lidocaine with sleeping pills or sedatives, it is possible to enhance their inhibitory effect on the central nervous system.Intravenous administration of lidocaine to patients taking cimetidine may have undesirable effects such as stupor, drowsiness, bradycardia, parasthesia, etc. inactivation in the liver. If necessary, the combination therapy with these drugs should reduce the dose of lidocaine.

Treatment: when the first signs of intoxication appear, the administration is stopped, the patient is transferred to the horizontal position; prescribe inhalation of oxygen. When convulsions - intravenous 10 mg of diazepam. In bradycardia, m-anticholinergics (atropine), vasoconstrictors (norepinephrine, phenylephrine). It is possible to conduct intubation, artificial ventilation, resuscitation. Dialysis is ineffective.

In the dark place at a temperature of no higher than 25aboutWITH.