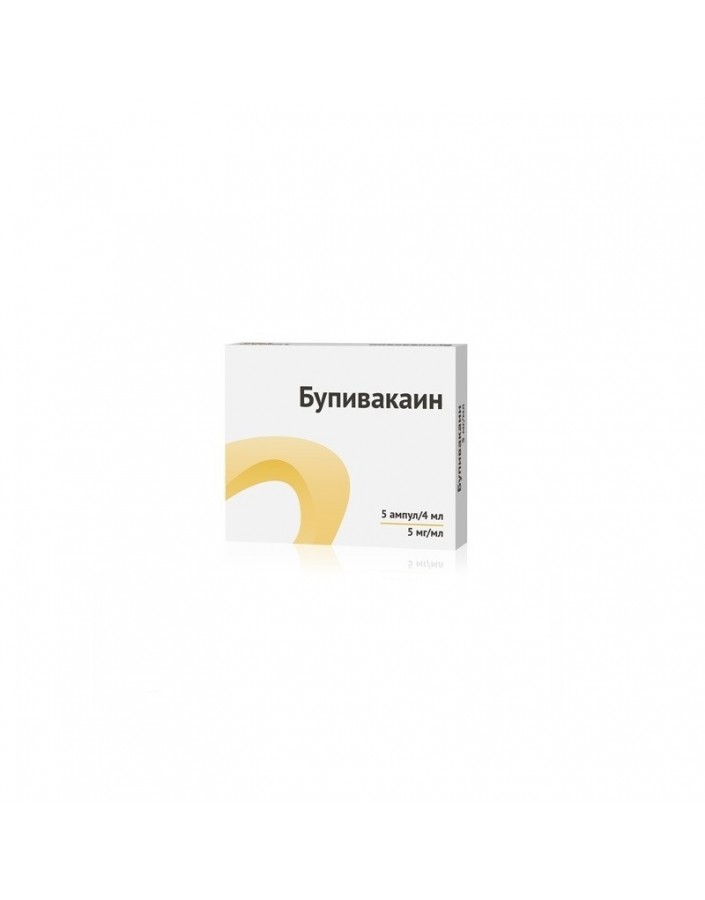 Bupivacaine is a long-acting amide-type local anesthetic. Reversibly blocks the conduction of pulses along the nerve fiber, disrupting the transport of sodium ions through sodium channels. May have a similar effect in the brain and myocardium. The most characteristic feature of bupivacaine is its duration of action, which does not greatly depend on the addition of epinephrine to it. Bupivacaine is the drug of choice for continuous epidural anesthesia. In low concentrations, it has less effect on motor fibers and has a shorter duration of action, which is advisable for short-term relief of pain, for example, during childbirth or after surgery. The relative density of the drug solution is 1004 at 20 ° C (equivalent to 1000 at 37 ° C, gravity has little effect on its distribution in the subarachnoid space. With a subarachnoid injection a small dose is administered, which leads to a relatively low concentration and short duration of the blockade. With subarachnoid the introduction of bupivacaine, which does not contain dextrose, anesthesia is less predictable, but longer than with the introduction of the solution of bupivacaine containing dextrose.

Surgical anesthesia in adults and children over 12 years. Acute pain in adults and children over 1 year. Infiltration anesthesia, when long-term anesthetic effect is required, for example, in case of postoperative pain. Conductive anesthesia with a long-lasting effect or epidural anesthesia in cases in which the addition of epinephrine is contraindicated and significant muscle relaxation is undesirable. Anesthesia in obstetrics. With intrathecal administration. Spinal anesthesia during surgical operations on the lower extremities, including operations on the hip joint, lasting 3-4 hours and not requiring a pronounced motor block.

Hypersensitivity to any of the components of the drug or to other local anesthetics amide type.Severe arterial hypotension (cardiogenic or hypovolemic shock). Children age: up to 12 years with surgical anesthesia, up to 1 year: with all indications for use, with the exception of intrathecal anesthesia, in which the drug is allowed to enter from birth. Intravenous regional anesthesia (Bieru blockade) (accidental entry of bupivacaine into the bloodstream may cause the development of acute systemic toxic reactions). Paracervical blockade in obstetrics. Conditions that are contraindications to epidural or intrathecal anesthesia: diseases of the central nervous system (CNS) (for example, meningitis, tumors, polio, intracranial hemorrhage); purulent infections of the skin at or near the lumbar puncture site; spinal stenosis, active diseases (for example, spondylitis, tumors, tuberculosis) or injuries (for example, a fracture) of the spine; sepsis, subacute combined degeneration of the spinal cord due to pernicious anemia and tumors of the brain and spinal cord; cardiogenic or hypovolemic shock; coagulation disorder or active anticoagulant therapy.

Solution for injection 5 mg / ml. On 4 ml in ampoules of colorless neutral glass type I with a color ring of a break or with a color point and a notch or without a ring of a break, a color point and a notch. One, two or three color rings and / or a two-dimensional bar code, and / or an alphanumeric coding with or without additional color rings, a two-dimensional bar code, alphanumeric coding can be additionally applied to the ampoules. On 5 ampoules in a blister strip packaging from a film of polyvinyl chloride and aluminum foil lacquered or polymer film, or without foil and without film. Or 5 ampoules are placed in a pre-made form (tray) of cardboard with cells for laying ampoules. 1 or 2 blister packs or cardboard trays along with instructions for use and scarifier or ampuln knife, or without scarifier and ampuln knife are placed in a carton (pack).