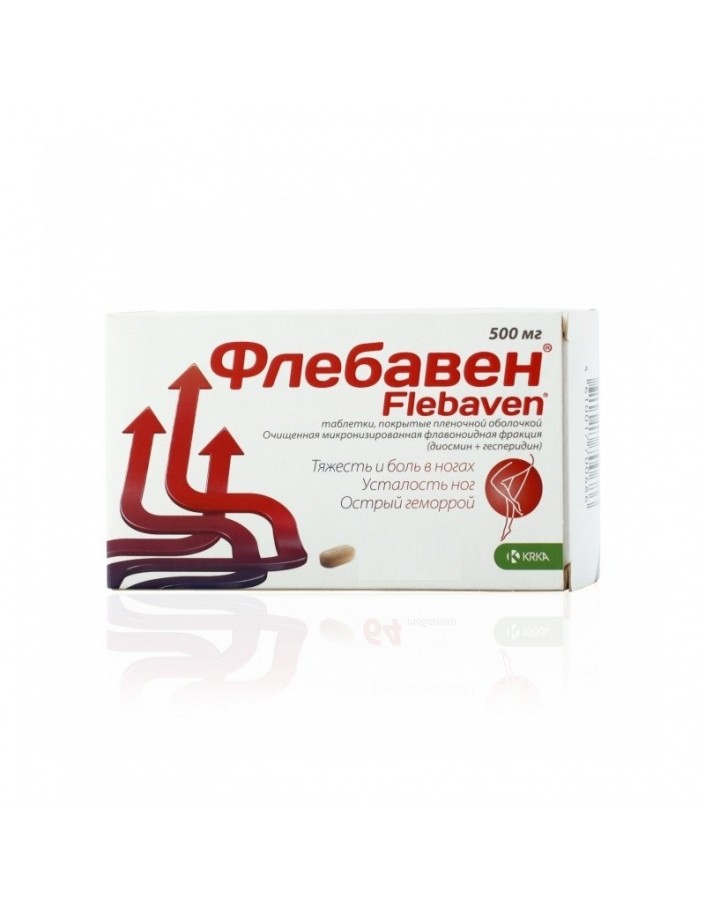 The composition of 1 tablet

Auxiliary substances of the substance - granules:

1 Purified micronized flavonoid fraction contains 90% (450 mg) of diosmin and 10% (50 mg) of other flavonoids in terms of hesperidin.

- feeling of heaviness in the legs;

To date, there have been no reports of any side effects when using the drug in pregnant women.

Due to the lack of data on the removal of the drug in breast milk, women during breastfeeding is not recommended to take the drug.

The recommended dose for venous lymphatic insufficiency is 2 pills per day:

The recommended dose for acute hemorrhoids is 6 pills per day: 3 pills in the morning and

The classification of the incidence of side effects recommended by the World Health Organization (WHO):

INFORM THE DOCTOR ABOUT THE APPEARANCE OF ANY ANYTHING IN YOU, NOT INCLUDED IN THIS INSTRUCTION, UNDESIRABLE REACTIONS AND SENSATIONS, AND ALTERING THE CHANGE OF LABORATORY INDICATORS IN THE SYSTEM

With an overdose of the drug Flebaven® seek medical attention immediately.

IT IS NECESSARY TO INFORM THE MEDICAL DOCTOR ABOUT ALL YOU TAKE MEDICAL PREPARATIONS.

Seek medical attention immediately if your condition worsens or there is no improvement in the treatment process.

Impact on the ability to perform potentially hazardous activities that require special attention and quick reactions (for example, driving, working with moving machinery)

The combination of hesperidin + diosmin has venotonic and angioprotective properties. Reduces the elasticity of the veins and venous congestion, in microcirculation - reduces the permeability of capillaries and increases their resistance, improves venous hemodynamics. It affects the following venous plethysmographic parameters: venous capacity, venous distensibility, time of venous emptying. The optimal effect is achieved when taking 2 tablets.

The combination of hesperidin + diosmin increases venous tone by reducing the time of venous emptying. In patients with signs of pronounced impairment of microcirculation, there is an increase in capillary resistance.

Drug Flebaven® mainly excreted through the intestines. The kidneys, on average, produce about 14% of the accepted dose of the drug.

The drug is subjected to active metabolism, as evidenced by the presence of phenolic acids in the urine.

On 16 pills in a blister strip packaging from a film of PVC and aluminum foil.

2, 4 or 6 blister packs together with instructions for use are placed in a pack of cardboard.

At a temperature not higher than 25 ° С, in the original package.

Do not use the drug after the expiration date.

Let go without a prescription.