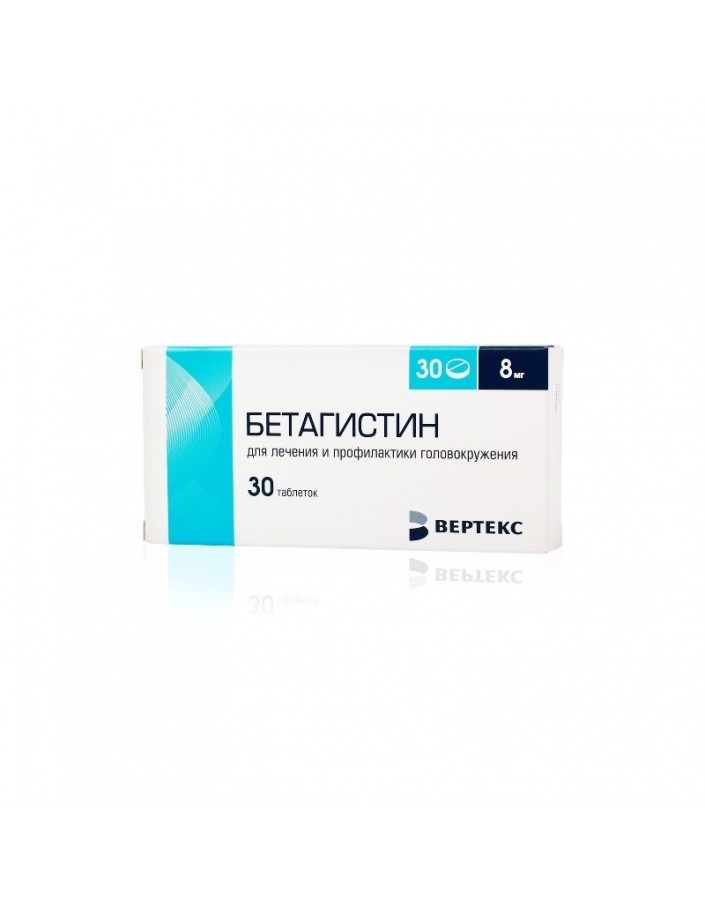 A drug that improves the microcirculation of the maze, used in the pathology of the vestibular apparatus. Betahistine acts mainly on histamine N1- and H3receptors of the inner ear and vestibular nuclei of the central nervous system. By direct agonistic effects on H1-receptors of the inner ear vessels, as well as indirectly through effects on H3-receptors improves microcirculation and capillary permeability, normalizes the endolymph pressure in the maze and cochlea. However, betahistine increases blood flow in the basilar artery.

The clinical manifestation of these properties is to reduce the frequency and intensity of dizziness, reduce tinnitus, improve hearing in case of a decrease.

Absorbed quickly, the degree of binding to plasma proteins is low. Cmax in blood plasma after 3 hours

T1/2 - 3-4 hours. Almost completely excreted by the kidneys as a metabolite (2-pyridylacetic acid) within 24 hours.

- treatment and prevention of vestibular vertigo of various origin;

The drug is taken orally during meals.

Improvement is usually noted already at the beginning of therapy, a stable therapeutic effect occurs after 2 weeks of treatment and may increase within several months of treatment.

The treatment is long. The duration of the drug is determined individually.

- pregnancy (due to lack of data);

- lactation period (due to lack of data);

with caution It should appoint a drug for gastric ulcer or duodenal ulcer (including in history), pheochromocytoma, bronchial asthma. Patients with these diseases should be monitored regularly during the treatment period.

The drug is contraindicated under the age of 18 years (due to lack of data).

Betahistine does not have a sedative effect and does not affect the ability to drive a car or engage in other activities that require the speed of psychomotor reactions.

Cases of interaction or incompatibility with other drugs are unknown.

The drug should be stored out of the reach of children, dry, protected from light, at a temperature not exceeding 25 ° C.