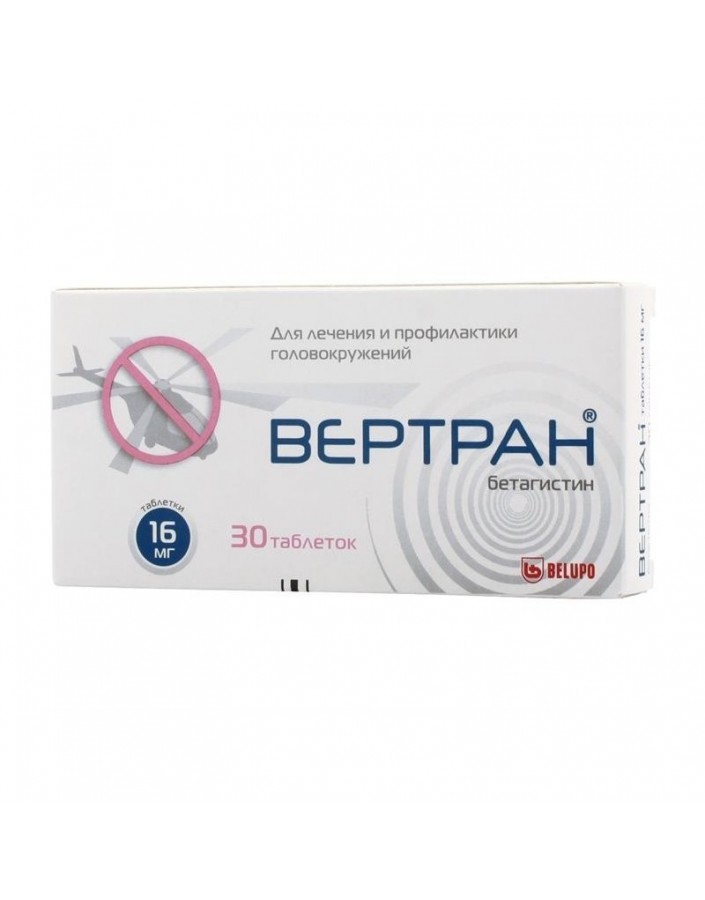 Indications :Meniere's disease; syndromes characterized by dizziness, tinnitus and / or progressive hearing loss, incl. dropsy of the labyrinth of the inner ear, vestibular and labyrinth disorders (including dizziness, noise and ear pain, headache, nausea, vomiting, hearing loss), vestibular neuritis, labyrinthitis, benign positional dizziness (including after neurosurgical operations); vertebrobasilar insufficiency, post-traumatic encephalopathy, cerebral atherosclerosis (as part of complex therapy).Dosing regimen:Inside, while eating.The dose of the drug is: Table. 8 mg - 1-2 tablets. 3 times a day; tabl. on 16 mg - on 1 / 2–1 tab. 3 times a day; tabl. on 24 mg - on 1 tab. 2 times a day. The maximum daily dose is 48 mg.The dose and duration of treatment should be selected individually depending on the patient's response to treatment.Improvement is usually noted already at the beginning of therapy, but it can be gradual and manifest even after several weeks of treatment. A stable therapeutic effect in some cases is achieved after several months of treatment.Dose adjustment in elderly patients, as well as in patients with renal and / or liver failure is not required.Side effect:On the part of the digestive system: slight nausea, feeling of heaviness in the epigastrium are possible.Allergic reactions: in some cases - skin rash, itching, urticaria.Contraindications for use:Pheochromocytoma, gastric ulcer and duodenal ulcer in the acute phase, asthma, first trimester of pregnancy hypersensitivity to betahistine.Use during pregnancy and lactation:Not recommended for use in the first trimester of pregnancy and lactation. Caution should be used in the II and III trimesters of pregnancy.Use in children:Caution should be used in children.Special instructions:Caution should be used in patients with gastric ulcer or duodenal ulcer in history, in the II and III trimesters of pregnancy, as well as in children.It must be borne in mind that the desired clinical effect is achieved after several months of treatment.With dyspeptic symptoms, betahistine is recommended to be taken during or after a meal.Drug Interactions:Antihistamines, while taking reduce the effect of betahistine.