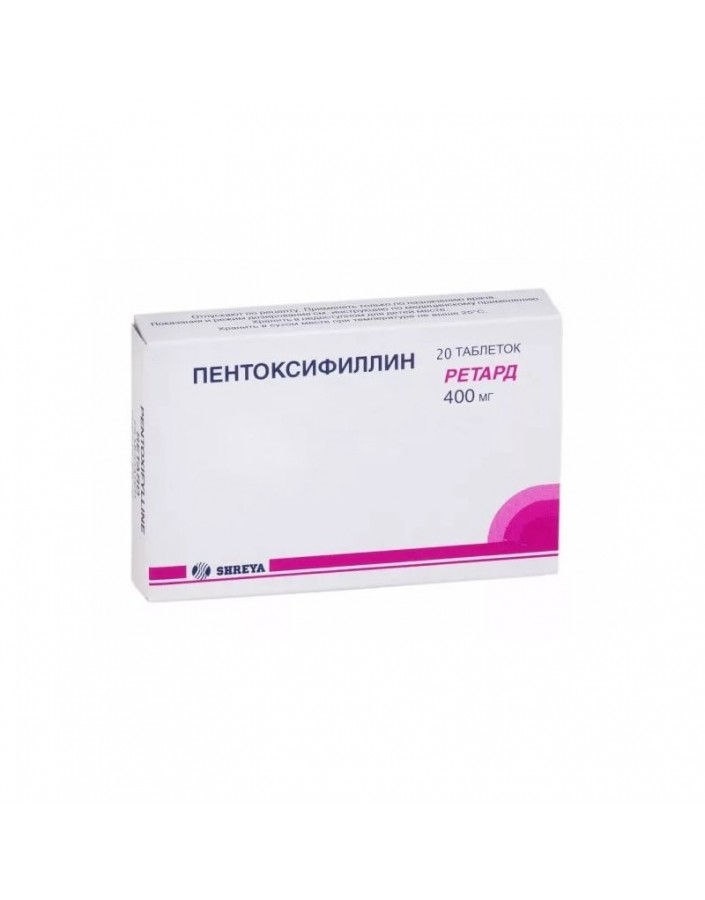 Vasodilator Pentoxifylline improves microcirculation and rheological properties of blood. The mechanism of action of pentoxifylline is associated with inhibition of phosphodiesterase and accumulation of CAMP in the smooth muscle cells of blood vessels and blood cells. Pentoxifylline inhibits the aggregation of platelets and red blood cells, increases their elasticity, reduces plasma fibrinogen levels and increases fibrinolysis, which reduces blood viscosity and improves its rheological properties.

It has a weak myotropic vasodilating effect. Pentoxifylline somewhat reduces the total peripheral resistance and slightly dilates the coronary vessels.

In general, pentoxifylline causes an improvement in microcirculation and oxygen supply to tissues in the central nervous system and limbs, and to a lesser extent in the kidneys.

After ingestion, pentoxifylline is rapidly and almost completely absorbed from the gastrointestinal tract. Cmax pentoxifylline in the blood plasma after a single intake is noted after 1 h. By the 8th hour, the concentration is significantly reduced (up to 10% of the initial).

The drug almost does not bind to proteins.

Most of the pentoxifylline is metabolized in the liver and excreted by the kidneys in the form of water-soluble metabolites (more than 90%).

In patients with severely impaired renal function, excretion of metabolites is delayed.

- acute and chronic disorders of cerebral circulation of the ischemic type;

- acute, subacute and chronic circulatory failure in the retina or in the choroid;

The duration of treatment and the dosage regimen of pentoxifylline are set by the attending physician individually, depending on the clinical picture of the disease and the resulting therapeutic effect.

The drug is taken orally immediately after eating, without chewing, with a sufficient amount of liquid.

For adults the drug is prescribed starting at 200 mg 3 times / day.

Most often, while taking Pentoxifylline, adverse gastrointestinal effects may occur (nausea, feeling of fullness in the stomach, stomach cramps, vomiting, diarrhea).Sometimes dizziness and headache may occur. Occasionally, a decrease in blood pressure, angina pectoris, an abnormal heart rhythm, and a tide sensation can be observed.

In rare cases, hypersensitivity reactions were observed reddening of the skin, itching, urticaria.

In isolated cases, the occurrence of very severe hypersensitivity reactions was described - angioedema, developing within a few minutes after taking Pentoxifylline, convulsive spasms of the bronchial muscles, and anaphylactic shock.

At the first sign of hypersensitivity reaction, it is necessary to urgently stop taking the drug and consult a doctor.

There are separate reports of the possibility of bleeding (in the gastrointestinal tract, in the skin, in mucous membranes), thrombocytopenia and aplastic anemia. In this regard, the treatment of pentoxifylline requires regular monitoring of the blood picture.

- hypersensitivity to pentoxifylline, other methylxanthines or other components of the finished dosage form.

Should be respected caution in the appointment of pentoxifylline to patients with gastric ulcer and duodenal ulcer, patients recently undergoing surgery (the risk of bleeding). Patients with labile blood pressure and with a tendency to arterial hypotension and patients with severe impaired renal function gradually increase the dose and select individually.

Should be respected caution when administering pentoxifylline to patients with severely impaired renal function: the dose is increased gradually and selected individually.

Contraindications: age up to 18 years.

Treatment symptomatic overdose. Special attention should be paid to maintaining blood pressure and respiratory function. Convulsive seizures are relieved by the administration of diazepam.

- in addition to other necessary measures, they ensure a lower position of the head and upper torso and provide freedom for breathing;

- urgent medical measures: injected into / in epinephrine (adrenaline).If necessary, the introduction of epinephrine can be repeated.

Pentoxifylline is able to enhance the action of antihypertensive agents and anticoagulants.

In patients with diabetes who are treated with insulin or taking antidiabetic drugs, Pentoxifylline may increase the anti-diabetic action of diabetes, up to the onset of hypoglycemic reactions.

Store in a dry place inaccessible to children at a temperature not exceeding 25 ° C.