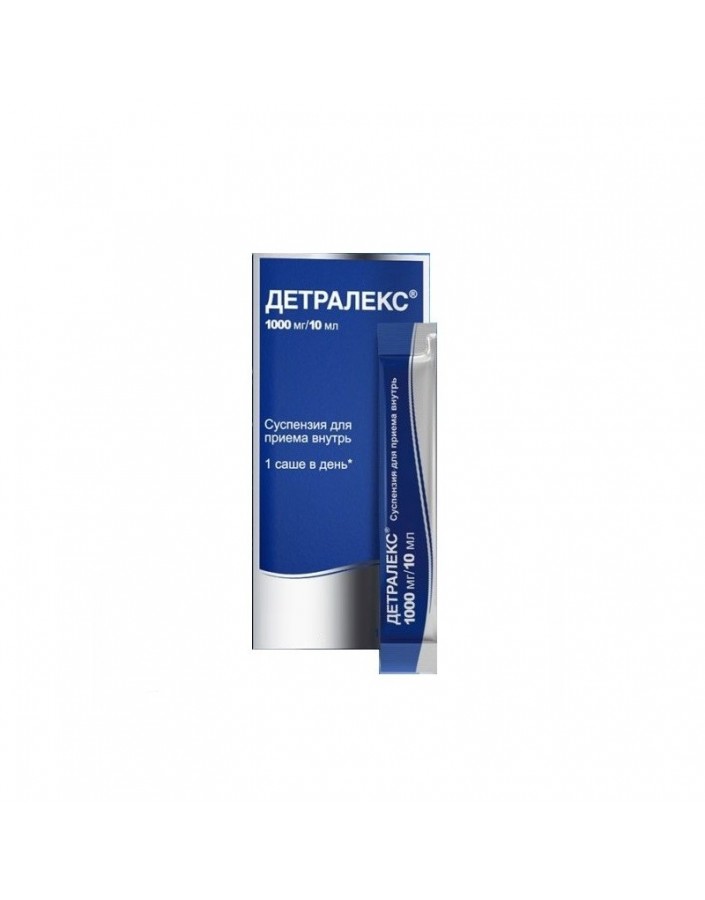 Homogeneous suspension of light yellow color with a characteristic smell.

Detralex® has venotonic and angioprotective properties. The drug reduces vein distension and venous congestion, reduces capillary permeability and increases their resistance. The results of 1 clinical studies confirm the pharmacological activity of the drug in relation to venous hemodynamic parameters. The statistically significant dose-dependent effect of the drug Detralex® was demonstrated for the following venous plethysmographic parameters: venous capacity, venous distensibility, time of venous emptying. The optimal dose-effect ratio is observed when taking 1000 mg per day.Detralex® increases venous tone: using venous occlusive plethysmography, a decrease in venous emptying time has been shown. In patients with signs of pronounced microcirculation disorders, after drug therapy. Detralex® is marked (statistically significant compared with placebo) an increase in capillary resistance, as assessed by angiostereometry. The therapeutic efficacy of Detralex® has been proven in the treatment of chronic venous diseases of the lower limbs, as well as in the treatment of hemorrhoids. Detralex® reduces undesirable side effects of invasive treatment of chronic lung disease (reduces the incidence of undesirable side effects in the surgical and endovascular treatment of varicose veins: significantly reduces the intensity of postoperative pain, swelling and severity of hemorrhages after endovascular and surgical treatment).

The main release of the drug occurs with feces. With urine, on average, about 14% of the accepted amount of the drug is excreted. The half-life is 11 hours. The drug is subjected to active metabolism, as evidenced by the presence of phenolic acids in the urine.

Detralex® is indicated for the treatment of symptoms of chronic venous disease (elimination and relief of symptoms).

Hypersensitivity to the active substance or to excipients that make up the drug. Fructose intolerance. The use of the drug is not recommended for lactating women.

Animal experiments revealed no teratogenic effects. To date, there have been no reports of adverse effects in the use of the drug in pregnant women.

Due to the lack of data on the elimination of the drug in breast milk, breastfeeding women are not recommended to take the drug.

Reproductive toxicity studies showed no effect on reproductive function in rats of both sexes.

1000 mg (contents of 1 sachet) per day, preferably in the morning, during the meal. The duration of the course of treatment can be several months (up to 12 months). In the case of recurrence of symptoms, according to the recommendation of the doctor, the treatment can be repeated.

The recommended dose for acute hemorrhoids

The recommended dose for chronic hemorrhoids

1000 mg (contents of 1 sachet) per day at any convenient time of the day with meals.

Side effects of the drug

INFORM THE DOCTOR ABOUT THE APPEARANCE OF ANYONE IN YOUR ANSWERE, NOT INCLUDED IN THIS INSTRUCTION, UNDESIRABLE REACTIONS AND SENSATIONS, AND ALSO, ABOUT CHANGES IN THE LABORATORY INDICATORS IN THE RESPONSE OF THE SYSTEM.

IT IS NECESSARY TO INFORM THE MEDICAL DOCTOR ABOUT ALL YOU TAKE MEDICAL PREPARATIONS.

Suspension for oral administration, 1000 mg / 10 ml. On 10 ml of suspension for intake in multilayered sachets (polyester, aluminum, polyethylene). On 15 or 30 sachets together with the instruction for medical use in a pack cardboard.

At a temperature not higher than 30 ° C. Keep out of reach of children.

3 years. Do not use after the expiration date printed on the package.