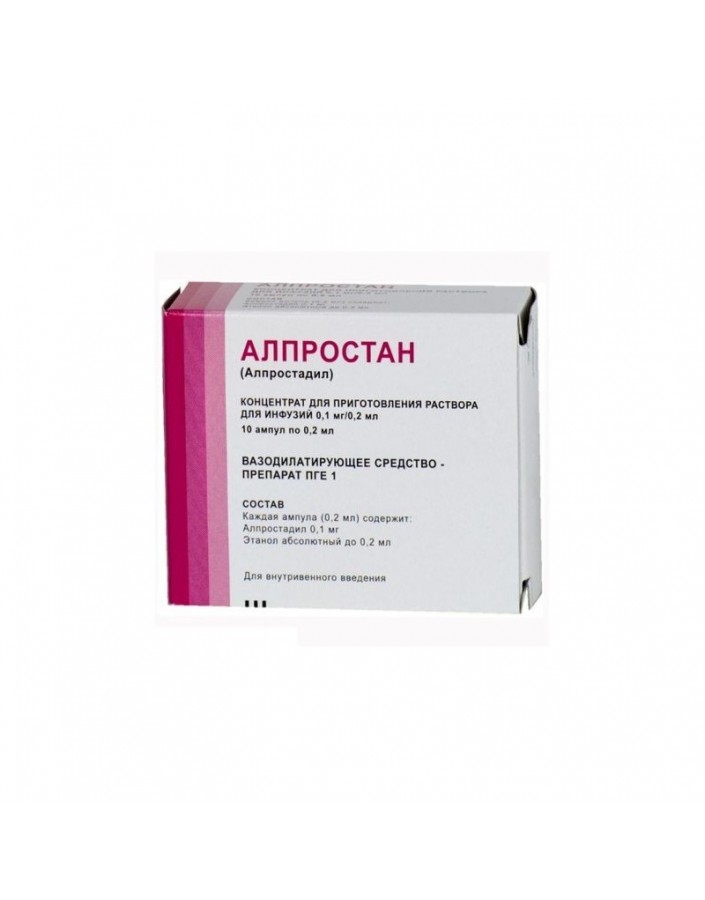 Alprostan has a vasodilator and angioprotective effect. Improves microcirculation and peripheral blood circulation, causes vasodilation at the level of arterioles, precapillary sphincters, arteries. With intracavernous administration relaxes the smooth muscles of the cavernous bodies, which contributes to increased blood flow and improve microcirculation in them. When intra-arterial injection contributes to the temporary preservation of the functioning arterial duct in newborns. Improves the rheological properties of blood, increasing the flexibility of red blood cells. It has an effect on the blood coagulation process, reducing the adhesion and aggregation of platelets. Alprostan has a fibrinolytic effect, as well as anti-atherogenic properties, slowing the activation of neutrophils, excessive proliferation of cells of the vascular wall.

Alprostan is contraindicated for use during pregnancy.If necessary, use during lactation should decide on the termination of breastfeeding.

Adults in the treatment of chronic obliterating diseases of arteries of Alprosin are prescribed IV drip in a dose of 50–200 mcg 1 time / day. or in more severe conditions, 50-100 mcg 2 times / day. As a solvent, use 200-500 ml of saline, 5% or 10% glucose solution. Duration of infusion - not less than 2 hours. The solution should be prepared immediately before administration. The duration of the course of therapy is an average of 14 days, with a positive effect, treatment can be continued for another 7-14 days. The maximum duration of therapy is 4 weeks. In the absence of a positive effect within 2 weeks from the start of treatment, further use of the drug should be discontinued. In case of congenital duct-dependent defects in newborns, Alprostan is administered by continuous infusion through large veins or through the umbilical artery directly into the mouth of the ductus arteriosus. The initial dose is 0.01-0.05 mg / kg / min. If necessary, the dose can be increased to 0.1 mcg / kg / min. When a therapeutic effect is achieved, the dose is reduced to the minimum maintenance (0.01-0.02 mg / kg / min).

From the side of the central nervous system: headache, dizziness, fatigue, feeling of indisposition.
Gastrointestinal: discomfort, nausea, vomiting, diarrhea; increased activity of hepatic transaminases, hyperbilirubinemia.
Cardiovascular: tachycardia, hypotension, angina attacks, cardiac arrhythmias, AV-blockade, pulmonary edema, cardiovascular insufficiency.
Hemic and lymphatic: leukopenia, leukocytosis.
Allergic reactions: hives.
Other: increased sweating, hyperthermia of the body, an increase in the titer of C-reactive protein; with a long course of treatment (from 4 weeks or more) - hyperostosis of the tubular bones; hematuria.
Local reactions: swelling of the limb, into which the vein is infused.
In newborns:
From the side of the central nervous system: irritability, convulsions, drowsiness.
Gastrointestinal: peritoneal symptoms, hyperbilirubinemia, diarrhea.
Cardiovascular: arterial hypotension, bradycardia, tachycardia, shock, acute heart failure, cardiac arrhythmias, AV-blockade.
Respiratory: respiratory depression (up to apnea), reduced respiratory function (bradypnea, tachypnea).
Hemic and lymphatic: DIC, bleeding, thrombocytopenia, anemia.
Urogenital: reduced renal function, anuria, hematuria.
Allergic reactions: skin rash, tachyphylaxis.
Other: hyper or hypothermia of the skin, skin hyperemia, hypo or hyperglycemia, hypertonicity of the neck muscles, hypercapnia. With prolonged therapy (for several weeks), hyperostosis may appear in the bones of the lower extremities.
With the development of side effects, the dose of the drug is recommended to be reduced.

In patients with hemodialysis, drug treatment should be carried out in the postdialysis period.

Symptoms: decrease in blood pressure, skin hyperemia, weakness.
Treatment: The infusion of the drug should be slowed or stopped. The need for specific treatment, as a rule, no. If there are signs of depression of the respiratory center in newborns, you should resort to mechanical ventilation.

The drug should be stored in a dry, dark place at a temperature of from 1 ° to 5 ° C; do not freeze.