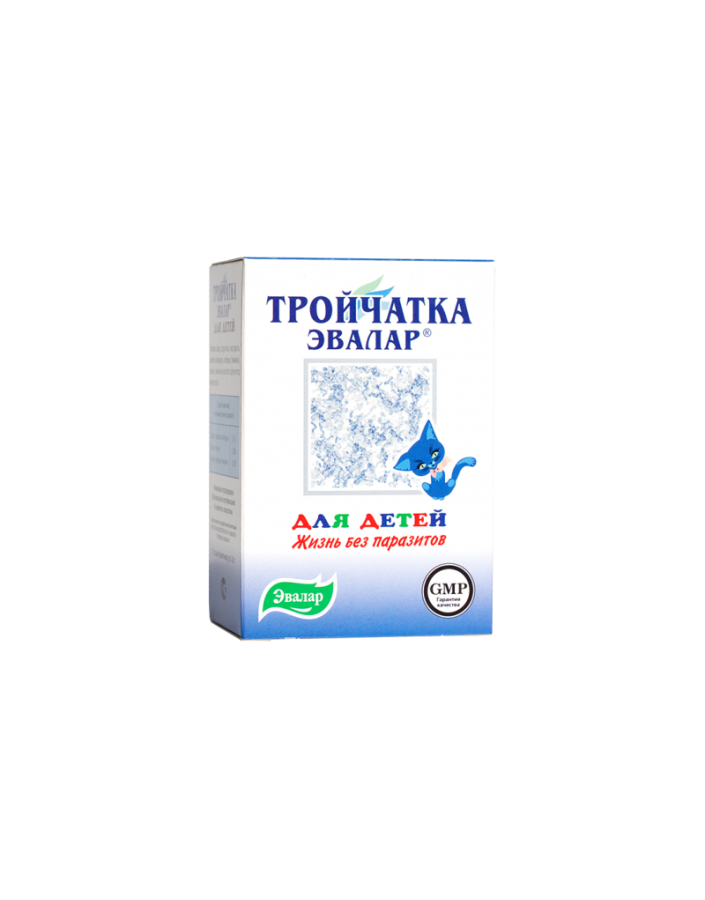 Non-medicinal remedy “Troychatka Evalar for children” improves the functional state of the gastrointestinal tract in case of parasitic invasions, promotes the excretion not only of parasites, but also of their metabolic products. Extracts of three herbs with anti-parasitic effect of “Troika Evalar” are destructive for parasites and non-toxic for children.

Troychatka Evalar is a biologically active food supplement made from natural plant ingredients to cleanse the body of parasites.
BAA has anthelmintic action, improves the functional state of the gastrointestinal tract.

Extract and flowers of tansy- have antimicrobial and anthelmintic action, effective against intestinal parasites; increase the secretion of the glands of the gastrointestinal tract and tone up its muscles, have analgesic and anti-inflammatory effect;

Extract and herb wormwood- have a broad spectrum antiparasitic effect, especially effective against round worms (roundworm, pinworms); normalize the gastrointestinal tract, improve digestion, enhance the separation of bile and improve its outflow through the intrahepatic ducts, preventing the formation of stones, stimulate the secretion of gastric juice;

Carnation flower buds- have a strong antiseptic effect, reduce the processes of fermentation and rotting in the intestine; while tansy and wormwood are effective against adult parasites, the carnation destroys the eggs of the worms.

Components of "Triple Evalar", in addition to the anthelmintic action, improve the functional state of the gastrointestinal tract. However, as the parasites weaken or die, they either detach from their place of residence or begin to disintegrate. Therefore, it is very important that the dying or already dead parasites and the toxins secreted by them as soon as possible and without hindrance be removed from the body. For the best result, it is recommended to use the dietary supplement of the ICC Ankir-B, the dietary fibers of which remove slags and toxins, and, stimulating the natural formation of stool, contribute to the purification process. or Chitosan-Evalar, which contains, in addition to dietary fiber, chitosan, a widely recognized sorbent of toxins.

"Troychatka Evalar" is recommended as a tonic that improves the functional state of the gastrointestinal tract.
BAA "Troychatka Evalar" can be used as a remedy in the treatment of patients with giardiasis, ascariasis and enterobiasis.

Children with individual intolerance to the components. Before use, consult with your doctor.

Extract and flowers of tansy, extract and grass of wormwood, carnation flower buds.

Sachet content is dissolved in 50 ml of hot water (you can add sugar to taste). Take children from 3 years on 1 sachet 2 times a day 30 minutes before meals.