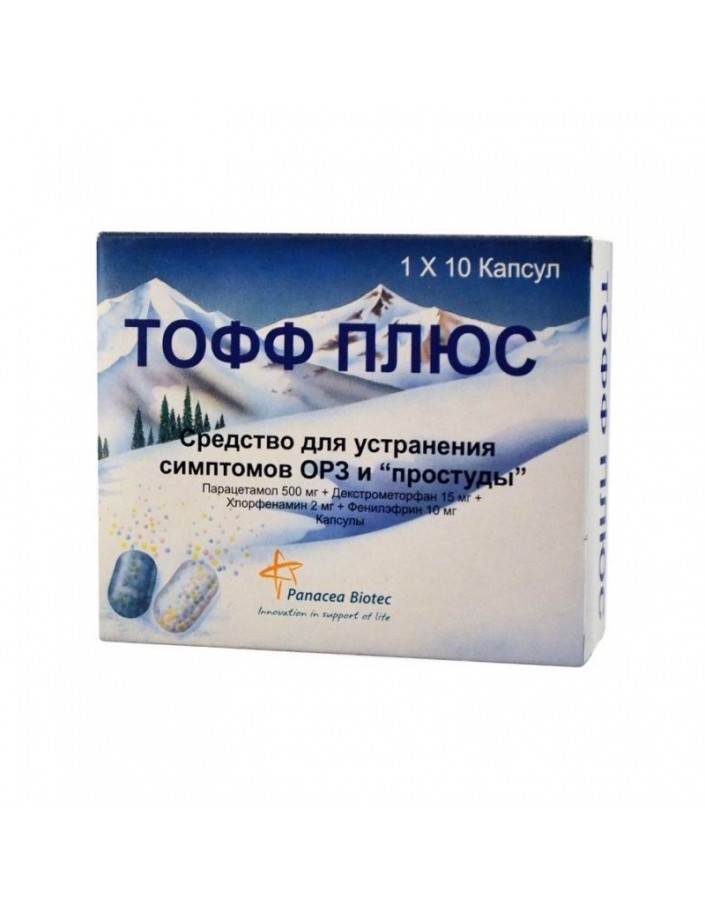 Toff plus is a combination drug used for colds. Paracetamol has analgesic, antipyretic and anti-inflammatory effects.
Phenylephrine - adrenergic agonist. It has mainly a direct effect on a-adrenoreceptors, causes a vasoconstrictor effect, reducing nasal congestion and the amount of discharge from the nose.
Chlorphenamine is a blocker of histamine H1 receptors. It has antiallergic effect, reduces vascular permeability, eliminates swelling and hyperemia of the nasal mucosa, nasopharynx and paranasal sinuses, reduces rhinitis, sneezing, itching and tearing.
Dextromethorphan has antitussive and sedative effects, increases the threshold of sensitivity of the cough center of the medulla oblongata, while not depressing the respiratory center. It does not have an analgesic effect. The onset of action of the drug - after 20-30 minutes, duration - 4-4.5 hours.

Adults appoint 1 capsule every 4-6 hours, but not more than 4 capsules / day. Duration of reception as an antipyretic - no more than 3 days. Further consultation of the doctor is necessary.

Precautions should be prescribed the drug for myocardial diseases, hyperthyroidism, elderly patients.
During the period of drug treatment Toff Plus should refrain from taking alcohol.
In persons suffering from chronic alcoholism, taking therapeutic doses of the drug Toff Plus can cause severe liver failure.
Influence on ability to drive motor transport and control mechanisms: Care should be taken when performing work that requires concentration, increased speed of motor and mental reactions.