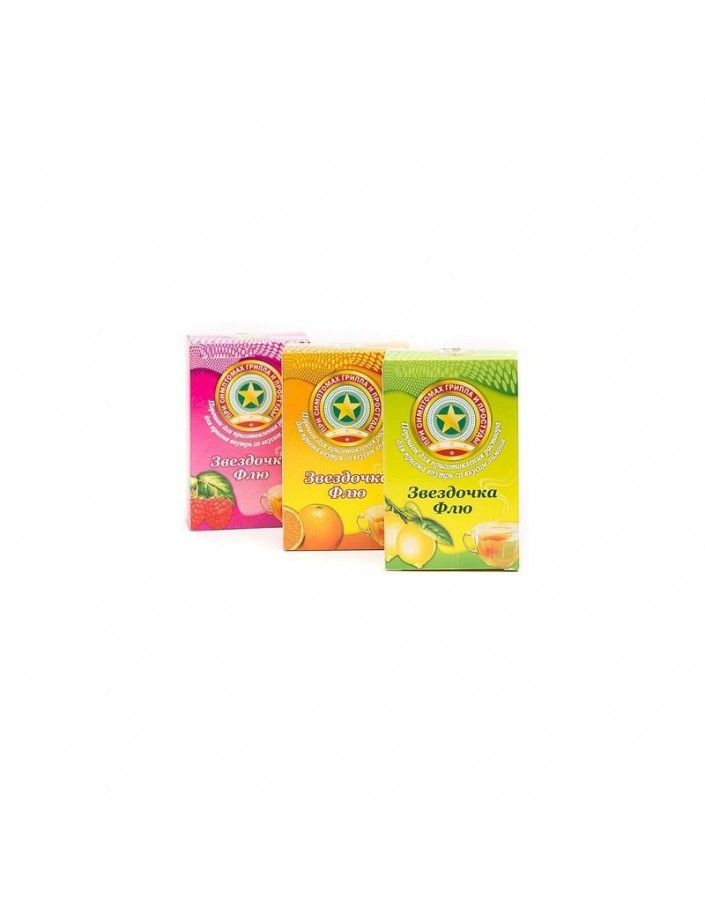 Dissolve the contents of one sachet in 1 cup of boiled hot water. Consume hot. You can add sugar to taste. Repeated dose can be taken every 4 hours (no more than 4 doses within 24 hours).

Flew Star can be used at any time of the day. If relief of symptoms is not observed within 3 days after the start of the drug administration, it is necessary to consult a doctor.

Use with caution in liver failure.

During treatment, it is necessary to refrain from the use of ethanol (possibly the development of a hepatotoxic action).

It is necessary to refrain from driving vehicles and engaging in other potentially hazardous activities that require increased concentration and psychomotor speed.

Symptoms (caused by paracetamol): pallor of the skin, loss of appetite, nausea, vomiting; hepatonecrosis (severity of necrosis due to intoxication directly depends on the degree of overdose).Toxic effect in adults is possible after taking more than 10-15 g of Paracetamol : an increase in the activity of liver transaminases,
an increase in prothrombin time (12-48 hours after administration); A detailed clinical picture of liver damage occurs after 1-6 days. Rarely, liver failure develops with lightning speed and may be complicated by renal failure (tubular necrosis).

Treatment: the introduction of SH-group donators and precursors of the synthesis of glutathione - methionine 8–9 hours after overdose and N-acetylcysteine ​​12 hours later.

The need for additional therapeutic measures (the further introduction of methionine, in / in the introduction of N-acetylcysteine) is determined depending on the concentration of paracetamol in the blood, as well as the time elapsed after taking it.

Ethanol enhances the sedative effect of pheniramine, which is part of the drug.

Glucocorticosteroids (GCS) increase the risk of developing an increase in intraocular pressure.

Reduces the hypotensive effect of guanethidine, which in turn enhances the alpha-adrenostimulatory activity of phenylephrine.