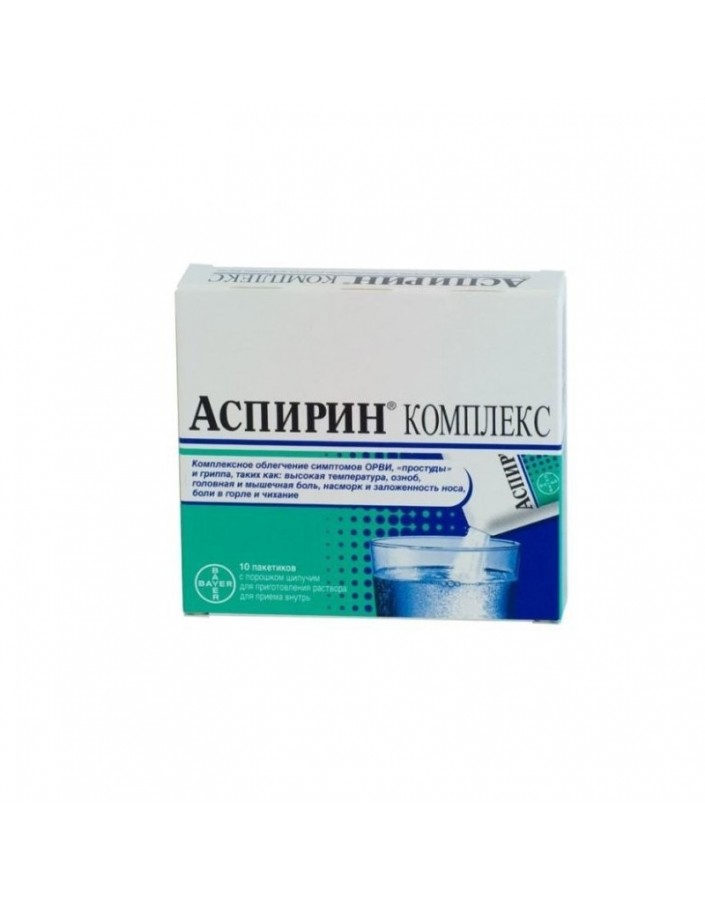 Powder effervescent for the preparation of oral solution.

A mixture of crystalline powders from almost white to white with a yellowish tinge.

Combined medication, the action of which is due to its active ingredients.

Phenylephrine is a sympathomimetic and, having a vasoconstrictor effect, reduces swelling of the mucous membranes of the nasal sinuses, as a result of which breathing is facilitated. Chlorphenamine belongs to the group of antihistamines, relieves symptoms such as sneezing and tearing.

Use to relieve symptoms of “colds”, acute respiratory viral infections, flu, such as: fever and chills, headache and muscle pain, runny nose and / or nasal congestion, sore throat and sneezing.

Hypersensitivity to acetylsalicylic acid and other NSAIDs or other components of the drug.

Erosive and ulcerative lesions of the gastrointestinal tract (in the acute phase), chronic or recurrent ulcers.

Asthma caused by taking salicylates or other NSAIDs.

Enlargement of the thyroid gland.

Combined use with oral anticoagulants.

Combined use with monoamine oxidase inhibitors, including 15 days after discontinuation.

The combined use of Methotrexate at a dose of 15 mg per week or more.

The drug is not prescribed to children under 15 years of age with acute respiratory diseases caused by viral infections, due to the risk of Reye's syndrome (encephalopathy and acute fatty liver with acute development of liver failure).

Use in patients with lung and kidney disease, with glaucoma, pheochromocytoma, cardiovascular diseases, diabetes mellitus, prostatic hypertrophy, with anemia.

Dissolve the contents of the bag in a glass of water room temperature. Take inside after eating.

Adults and children over 15 years: one sachet every 6-8 hours.

The maximum daily dose - 4 bags, the interval between doses of the drug should be at least 6 hours.

The duration of treatment (without consulting a doctor) should not exceed 5 days when prescribed as an anesthetic and more than 3 days as an antipyretic.

Acetylsalipilic acid The body as a whole: hyperhidrosis.

The body as a whole: dry mouth, dry mucous of the mouth and nose, disturbed accommodation (blurred vision).

If any adverse reactions occur, stop taking the drug and consult a doctor.

Combination with Methotrexate at a dose of> 15 mg per week is contraindicated. Combinations of drugs that are used with caution:

Methotrexate in a dose of less than 15 mg / week: The simultaneous use of drugs increases the hematologic toxicity of methotrexate due to the fact that NSAIDs in general reduce the renal clearance of methotrexate, and salicylags, in particular, displace it from the association with plasma proteins.

Anticoagulants (coumarin, heparin): while taking ASA and indirect anticoagulants, the risk of bleeding increases due to the suppression of platelet function, damage to the mucous membrane of the stomach and duodenum, and the displacement of oral anticoagulants from their association with plasma proteins.

Other NSAIDs with salicylates at a high dose (at a dose of 3 g / day or more): with the simultaneous use of drugs because of the synergistic effect, the risk of ulceration of the mucous membrane of the gastrointestinal tract and bleeding increases.

Uricosuric drugs (probenecid, sulfinpirazon): the therapeutic effect of uricosuric drugs is reduced due to competitive tubular elimination of uric acid.

Digoxin: with the simultaneous use of drugs increases the concentration of Digoxin in the plasma by reducing its excretion.

Antidiabetic drugs (insulin, sulfonylurea): the hypoglycemic effect is enhanced by the fact that high-dose ASA has hypoglycemic properties and displaces the sulfonylurea from the bond with plasma proteins.Thrombolytic / anti-platelet drugs of other classes (ticlopidine): the risk of bleeding increases.

Diuretics in combination with ASA at a dose of 3 g / day or more: reduced glomerular filtration, due to a decrease in the synthesis of prostaglandins in the kidneys.

Systemic glucocorticosteroids (GCS) with the exception of Hydrocortisone (used to treat Addison's disease): with simultaneous use of drugs, the concentration of salicylates in the blood decreases because GCS increases the elimination of salicylates. Angiotensin-converting enzyme (ACE) inhibitors: with the simultaneous use of ACE inhibitors and ASA at a dose of 3 g / day or more, a decrease in the hypotensive effect of ACE inhibitors is observed, due to a decrease in glomerular filtration.

Alcohol: when combined with ASA, the damaging effect on the mucous membrane of the gastrointestinal tract increases and the bleeding time is prolonged.

Sympathomimetics: with simultaneous use, the effect of sympathomimetics on the CNS and cardiovascular system is enhanced. Perhaps arousal, irritability, insomnia.

Inhalation anesthetics: the use of filylephrine before inhalation anesthesia increases the risk of heart rhythm disturbances. Treatment with phenylephrine should be discontinued a few days before the planned surgical treatment. Rauwolfia alkaloids - with simultaneous use may decrease the therapeutic effect of phenylephrine.

Caffeine: when applied simultaneously, the therapeutic and toxic effects of caffeine may increase.

Indomethacin, Bromocriptine : in isolated cases with simultaneous use of phenylephrine with Indomethacin or bromocriptine severe arterial hypertension is possible.

Selective serotonin reuptake inhibitors: when used simultaneously with antidepressants of this group (fluvoxamine, paroxetine, sertraline), the body's sensitivity to sympathomimetics may increase as well as the risk of a serotonergic effect may increase.

Antihypertensive drugs from the group of sympatholytics, such as reserpine, guanethidine: phenylephrine reduces the hypotensive effect of these drugs.

Acetylsalicylic acid may increase the tendency to bleeding, which is associated with its inhibitory effect on platelet aggregation. This should be considered when