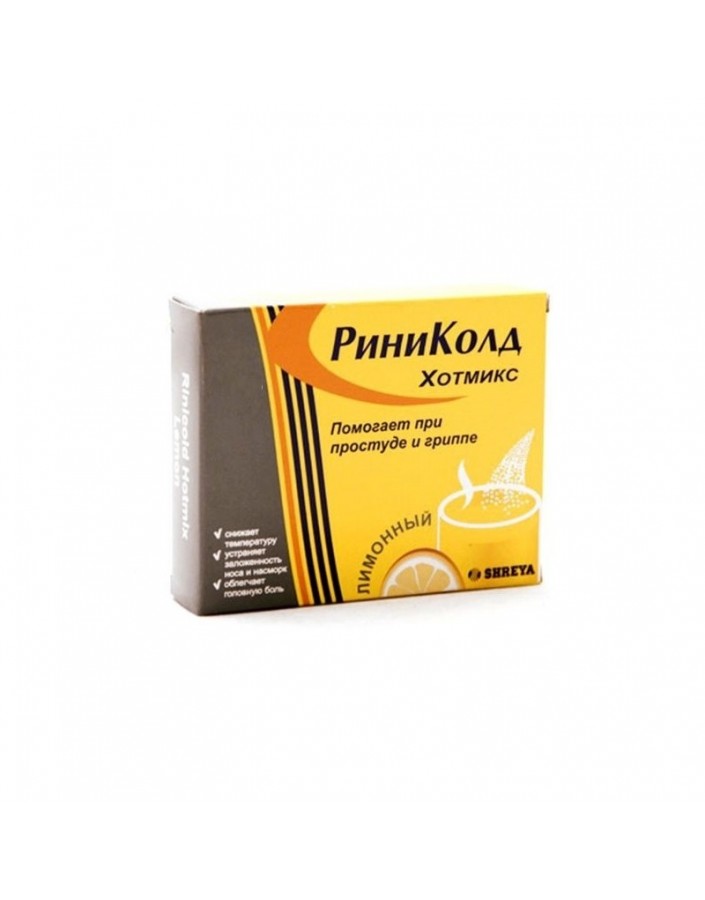 Loose powder almost white with a yellowish tinge, with white patches. When dissolved in 200 ml of hot water, a solution of a light yellow color with a faint greenish tinge, with a lemon smell, and opalescence is formed.

Loose powder almost white color with a pinkish tinge, with white patches. When dissolved in 200 ml of hot water, an orange-colored solution is formed with an orange odor.

When dissolved in 200 ml of hot water, a greenish-yellow solution with a pineapple smell is formed.

remedy for eliminating the symptoms of ARI and

Phenylephrine has a vasoconstrictor effect - reduces swelling and hyperemia

mucous membranes of the upper respiratory tract and paranasal sinuses.

itching of the eyes, nose and throat, swelling and hyperemia of the mucous membranes of the nasal cavity, nasopharynx and paranasal sinuses, reduces exudative manifestations.

Caffeine has a stimulating effect on the central nervous system that

leads to a decrease in fatigue and drowsiness, to an increase in mental and physical performance.

Hypersensitivity to Paracetamol and other components of the drug; taking other medicines containing substances that are part of the drug; simultaneous administration of tricyclic antidepressants, beta-blockers, MAO inhibitors, including up to 14 days after cancellation; pregnancy, lactation; children's age (up to 15 years).

With care - pronounced atherosclerosis of the coronary arteries, arterial

The contents of 1 sachet (bag) pour in a glass, pour hot water, mix until dissolved and drink (if desired, you can add sugar or honey). It is necessary to take a preparation with a large amount of liquid, in 1-2 hours after meal. Adults and children over 15 years of age: take one sachet 3-4 times a day with intervals of 4-6 hours. The maximum daily dose - 4 bags.

three days as antipyretic without prescription and observation by a doctor.

Increasing the daily dose of the drug or the duration of treatment is possible only under medical supervision. Do not exceed the specified dose. In case of overdose, consult a doctor immediately, even if you feel well.

On the part of the nervous system: dizziness, sleep disturbance, increased

On the part of the digestive system: nausea, vomiting, pain in the epigastric region, dry mouth, hepatotoxic action.

On the part of the senses: mydriasis, accommodation paresis, increased intraocular

From the side of blood-forming organs: thrombocytopenia, agranulocytosis.

It is caused, as a rule, by paracetamol and appears after taking more than 10 - 15 g of paracetamol.

"Liver" transaminases, an increase in prothrombin time. At

symptoms of overdose, it is necessary to urgently consult a doctor.

gastric lavage followed by the appointment of Activated carbon; symptomatic therapy, the introduction of methionine after 8-9 hours after overdose and N - acetylcysteine ​​- after 12 hours.

With simultaneous administration of the drug with barbiturates, difenin, Carbamazepine, rifampicin and other inducers of liver microsomal enzymes, the risk of the development of the hepatotoxic effect of paracetamol increases.

Before taking the drug, a medical consultation is necessary in the case of: taking

During treatment, you should refrain from taking alcohol, sleeping pills and

anxiolytic (tranquilizers) drugs. Do not take along with

other drugs containing paracetamol.Care should be taken when performing work that requires concentration, increased speed of motor and mental reactions. If the symptoms of the disease persist within 3-5 days, consult a doctor.

TO AVOID TOXIC LOSS OF PARACETAMOL

SHOULD NOT COMBINE WITH THE RECEPTION OF ALCOHOLIC BEVERAGES, AND ALSO TAKE TO PERSONS BOWN TO CHRONIC USE OF ALCOHOL.

Information on the possible effect of a medicinal product for medical use on the ability to drive vehicles and machinery.

Care must be taken when driving and

occupations of other potentially hazardous activities requiring increased concentration of attention and quickness of psychomotor reactions.