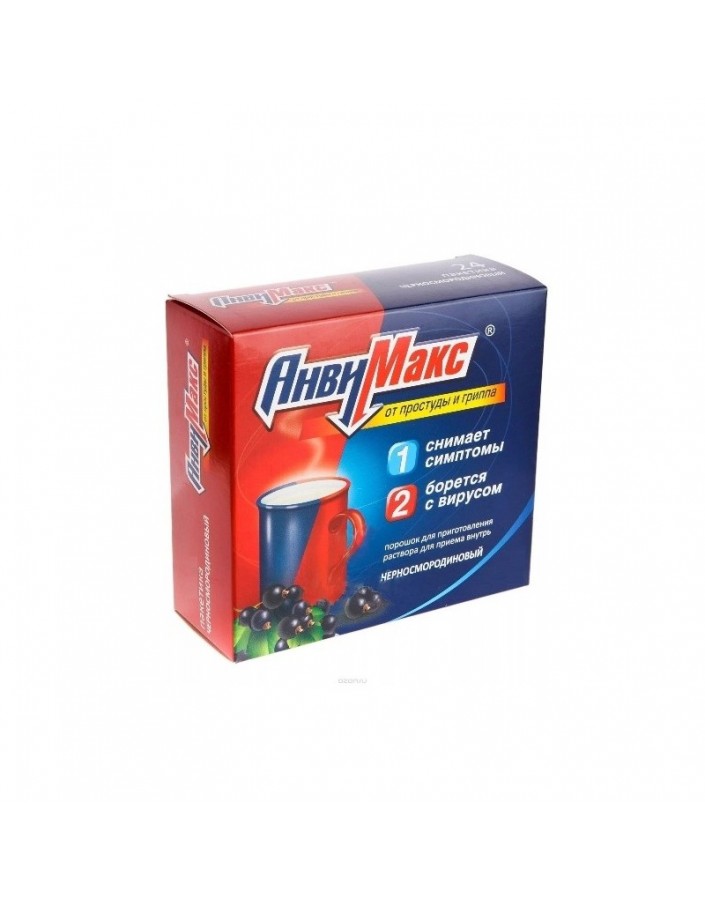 ANVIMAX POWDER FOR INTERNAL USE BLACKCURRANT

Calcium gluconateas a source of Calcium ions, prevents the development of increased permeability and fragility of blood vessels, causing hemorrhagic processes in case of influenza and ARVI, has antiallergic effect (mechanism is unclear).

Rimantadine possesses antiviral activity against influenza A virus. Blocking M2Channels of influenza A virus, violates its ability to penetrate cells and release ribonucleoprotein, thereby inhibiting the most important stage of viral replication. Induces the production of Interferon alpha and gamma. With influenza B virus, Rimantadine has an antitoxic effect.

Rutoside is an angioprotector.Reduces capillary permeability, swelling and inflammation, strengthens the vascular wall. It inhibits aggregation and increases the degree of red blood cell deformation.

Loratadine - histamine H blocker1-receptors, prevents the development of tissue edema associated with the release of histamine.

Metabolized in the liver in three main ways: conjugation with glucuronides, conjugation with sulfates, oxidation by microsomal liver enzymes. In the latter case, toxic intermediate metabolites are formed, which are subsequently conjugated with glutathione, and then with cysteine ​​and mercapturic acid. The main isoenzymes of cytochrome P450 for this pathway are the isoenzyme CYP2E1 (predominantly), CYP1A2, and CYP3A4 (secondary role). When glutathione is deficient, these metabolites can cause damage and necrosis of hepatocytes. Additional metabolic pathways are hydroxylation to 3-hydroxy paracetamol and methoxylation to 3-methoxy paracetamol, which are subsequently conjugated with glucuronides or sulfates.In adults, glucuronidation prevails. Conjugated paracetamol metabolites (glucuronides, sulfates and conjugates with glutathione) have low pharmacological (including toxic) activity.

Absorbed from the gastrointestinal tract (mainly in the jejunum). Diseases of the gastrointestinal tract (gastric ulcer and duodenal ulcer, constipation or diarrhea, worm infestation, giardiasis), the use of fresh fruit and vegetable juices, alkaline drink reduces the absorption of Ascorbic acid in the intestine. The plasma ascorbic acid concentration is normally around 10-20 μg / ml. Time to reach Cmax in blood plasma after ingestion - 4 hours

Metabolized predominantly in the liver to deoxyascorbic and then to oxaloacetic acid and ascorbate 2-sulfate.

Excreted by the kidneys, through the intestines, with then unchanged and in the form of metabolites.

Smoking and the use of ethanol accelerate the destruction of ascorbic acid (turning into inactive metabolites), sharply reducing reserves in the body.

It is derived during hemodialysis.

After ingestion is almost completely absorbed in the intestine. Absorption is slow. According to the results of clinical studies, the following pharmacokinetic parameters of rimantadine were established: when using capsules Cmax in blood plasma, it is achieved in 4.53 ± 2.52 h and amounts to 68.2 ± 26.6 ng / ml, when using the drug in powder form - in 5.28 ± 2.54 h and is 69 ± 19.7 ng / ml.

In chronic renal failure T1/2 increases by 2 times. In patients with renal insufficiency and in elderly people, rimantadine can accumulate in toxic concentrations if the dose is not adjusted in proportion to the decrease in CC. Hemodialysis has a minor effect on the clearance of rimantadine.

Plasma protein binding - 97%. Does not penetrate the BBB.

Metabolized in the liver to form the active metabolite of descarboethoxyloratadine with the participation of cytochrome CYP3A4 isoenzymes and to a lesser extent CYP2D6.

Cmax in the elderly increases by 50%.

In patients with chronic renal failure and during hemodialysis, the pharmacokinetics are virtually unchanged.

- etiotropic treatment of influenza type A;

The drug is taken orally after a meal. Capsules should be washed down with water. The powder (contents of 1 sachet) must be dissolved in 1/2 cup of warm boiled water and stirred. The resulting solution should be consumed immediately after preparation.

The drug should be taken within 3-5 days (no more than 5 days) until the symptoms of the disease disappear. In the absence of improvement in well-being, the patient should stop using the drug and consult a doctor.

From the nervous system: irritability, drowsiness, tremor, hyperkinesia, dizziness, headache, "flushes" of blood to the face.

From the digestive system: damage to the mucous membrane of the stomach and duodenum, dyspepsia , dry mucous membranes in the mouth, lack of appetite, flatulence, diarrhea.

From the urinary system: moderate pollakiuria.

From the hemopoietic system: changes in blood counts (control required).

On the part of the endocrine system: inhibition of the function of the insular apparatus of the pancreas (hyperglycemia, glycosuria).

- Hypersensitivity to one or several components of the drug;

- erosive and ulcerative lesions of the gastrointestinal tract in the acute phase;

- diseases of the thyroid gland;

The use of the drug is contraindicated in portal hypertension, acute liver disease (acute g