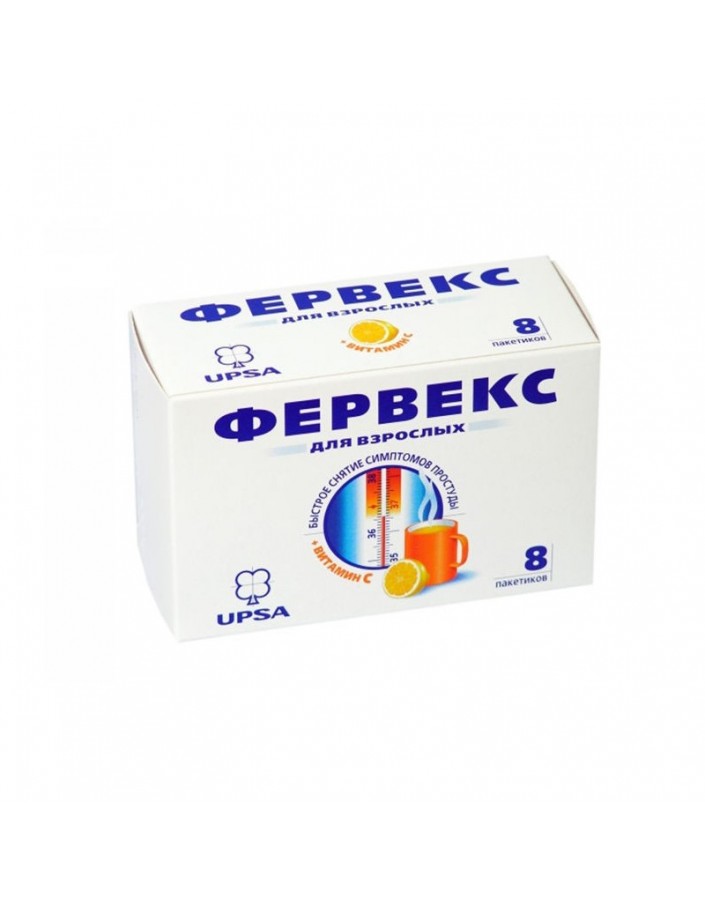 Paracetamol is an antipyretic analgesic that has analgesic and antipyretic effects, due to its effect on the thermoregulation center in the hypothalamus; eliminates headache and other types of pain, reduces fever.

Ascorbic acid (vitamin C) is involved in the regulation of redox processes, carbohydrate metabolism, blood clotting, tissue regeneration, in the synthesis of GCS, collagen and procollagen; normalizes capillary permeability. Increases the body's resistance, which is associated with the stimulation of the immune system.

- erosive and ulcerative lesions of the digestive tract (in the acute phase);

- I and III trimesters of pregnancy;

Fervex appoint inside on 1 bag 2-3 times / days. preferably between meals.The interval between doses of the drug is at least 4 hours.

In patients with impaired liver or kidney function and elderly patients, the interval between doses of the drug should be at least 8 hours.

The duration of treatment (without consulting a doctor) is no more than 5 days when used as an analgesic and no more than 3 days as a febrifuge.

The drug should be completely dissolved in a glass of warm water and immediately drink the resulting solution.

Urogenital: rarely, urinary retention; with prolonged use in doses significantly higher than recommended, increases the likelihood of impaired renal function.

The drug is well tolerated in the recommended doses.

With simultaneous use with Fervex GKS increase the risk of developing glaucoma.

Inductors of microsomal oxidation in the liver (phenytoin, ethanol, barbiturates, rifampicin, phenylbutazone, tricyclic antidepressants) increase the production of hydroxylated active metabolites of Paracetamol, which causes the possibility of severe intoxication with a small overdose of the drug.

Inhibitors of microsomal oxidation (including cimetidine) reduce the risk of hepatotoxic action of paracetamol.

Ethanol contributes to the development of acute pancreatitis.

Symptoms caused by the action of paracetamol: pallor of the skin, loss of appetite, nausea, vomiting; hepatonecrosis (severity of necrosis due to intoxication directly depends on the degree of overdose). Toxic effects in adults are possible after taking paracetamol at a dose of more than 10-15 g: an increase in liver transaminase activity, an increase in prothrombin time (12-48 hours after administration); A detailed clinical picture of liver damage occurs after 1-6 days. Rarely - fulminant development of liver failure, which may be complicated by renal failure (tubular necrosis).

The drug should be stored out of the reach of children, in a dry place at a temperature not exceeding 25 ° C.