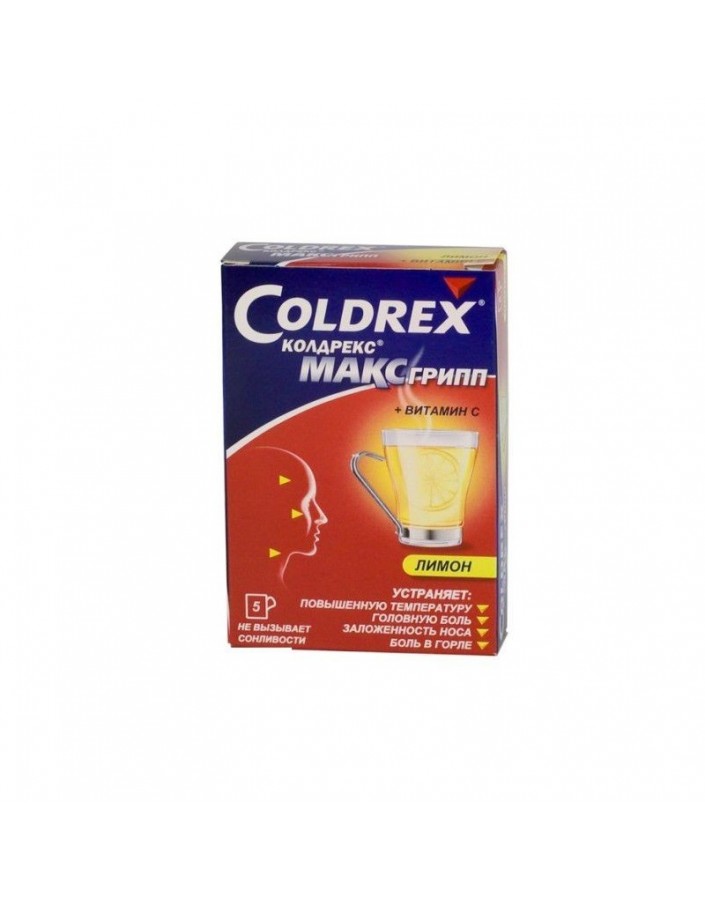 Combined medication used for influenza and colds. Paracetamol has a antipyretic, analgesic effect. The content of paracetamol in the preparation corresponds to the maximum single dose allowed for non-prescription use and recommended by WHO.
Phenylephrine hydrochloride - sympathomimetic, narrows the vessels of the nasal mucosa and paranasal sinuses, resulting in reduced swelling and facilitated nasal breathing.
Ascorbic acid replenishes the increased need for vitamin C for colds and flu.
The active ingredients of the drug do not cause drowsiness and do not violate the concentration of attention.

Data on the pharmacokinetics of Coldrex MaxGripp with lemon flavor are not provided.

recommend 1 sachet every 4-6 hours, but no more than 4 sachets within 24 hours. The interval between doses should be at least 4 hours.
The contents of 1 sachet must be poured into a glass of hot water, stirred until complete dissolution and add cold water or sugar as desired.
The maximum duration of the drug is 5 days.

The preparation Coldrex MaksGripp with lemon flavor is contraindicated for use during pregnancy. If necessary, use during lactation should decide on the termination of breastfeeding.

The drug should be taken only in recommended doses.
The drug should not be taken simultaneously with other drugs containing paracetamol.
The patient should be informed that if the symptoms of the disease persist after 5 days of use of the drug, you should stop taking it and consult with your doctor.
Patients taking Coldrex MaxGripp with lemon flavor should refrain from drinking alcohol.
It is not recommended to prescribe the drug for chronic alcoholism.
Please note that 1 pack of Coldrex MaxGrippa with lemon flavor contains 0.12 g of sodium.

The drug should be stored in a place inaccessible to children at a temperature not higher than 25 ° C. Shelf life - 3 years.