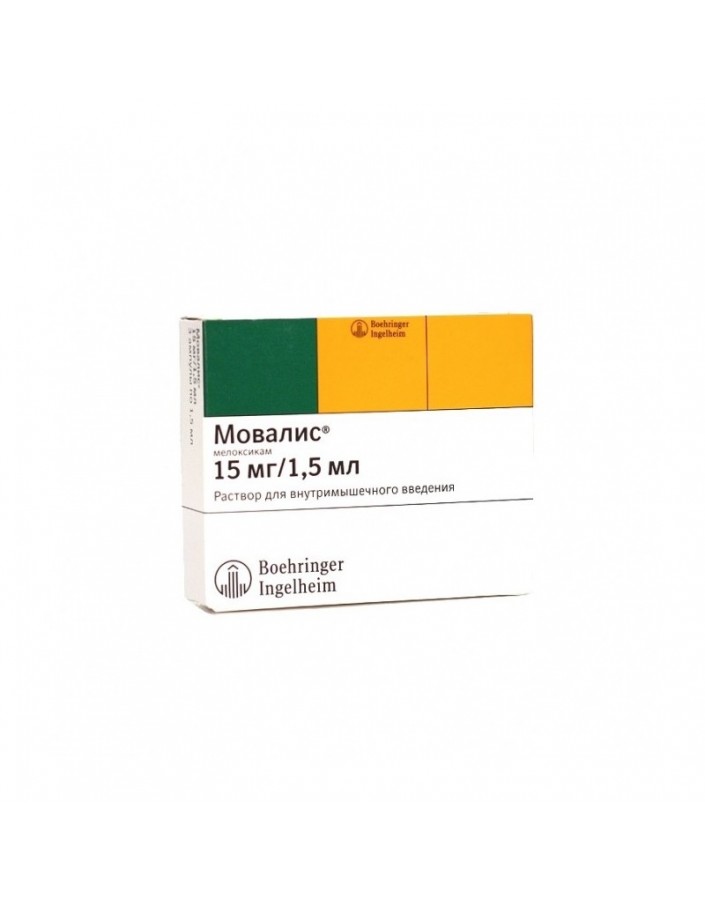 Rheumatoid arthritis: 15 mg / day. Depending on the therapeutic effect, this dose may be reduced to 7.5 mg / day.

Ankylosing spondylitis: 15 mg / day. Depending on the therapeutic effect, this dose may be reduced to 7.5 mg / day.

In patients with an increased risk of adverse reactions, it is recommended to begin treatment with a dose of 7.5 mg / day.

Have patients with severe renal failure who are on hemodialysis, the dose should not exceed 7.5 mg / day.

Since the potential risk of adverse reactions depends on the dose and the duration of treatment, the lowest possible doses and duration of use should be used. The maximum recommended daily dose is 15 mg.

The total daily dose of Movalis ®used in the form of different dosage forms should not exceed 15 mg. V / m administration of the drug is shown only during the first few days of therapy.Further treatment is continued with the use of oral dosage forms. The recommended dose is 7.5 mg or 15 mg 1 time / day, depending on the intensity of pain and the severity of the inflammatory process. The drug is injected through a deep intramuscular injection. The drug should not be administered in / in. Given the possible incompatibility, Movalis® solution for i / m administration should not be mixed in the same syringe with other drugs.

Below are described the side effects, the connection of which with the use of Movalis®was regarded as possible.

Hemic and lymphatic: infrequently - anemia; rarely - leukopenia, thrombocytopenia, changes in the number of blood cells, including changes in leukocyte formula.

Cardiovascular: infrequently - an increase in blood pressure, a sense of "tide" of blood to the face; seldom - heartbeat.

Respiratory: rarely, bronchial asthma (in patients allergic to Acetylsalicylic acid or other NSAIDs).

Liver and biliary tract: infrequently, transient changes in the indices of liver function (for example, an increase in the activity of transaminases or bilirubin); very rarely - hepatitis.

General disorders and disorders at the site of administration: often - pain and swelling at the injection site; Infrequently - swelling.

Combined use with drugs that inhibit the bone marrow (eg, methotrexate), can provoke cytopenia.

Gastrointestinal bleeding, an ulcer or perforation can be fatal.

As with other NSAIDs, the possibility of interstitial nephritis, glomerulonephritis, renal medullary necrosis, and nephrotic syndrome is not excluded.

- hypersensitivity (including to other NSAIDs), complete or incomplete combination of bronchial asthma, recurrent polyposis of the nose or paranasal sinuses and intolerance to acetylsalicylic acid or other NSAIDs (including in history);

- erosive and ulcerative lesions of the stomach and duodenum in the acute phase or recently transferred;

- severe renal failure (if hemodialysis is not performed, CC is less than 30 ml / min, and also with confirmed hyperkalemia);

- associated therapy with anticoagulants, because there is a risk of intramuscular hematomas;

- Hypersensitivity to the active substance or auxiliary components of the drug. There is a possibility of cross-sensitivity to acetylsalicylic acid and other NSAIDs.

- Diseases of the gastrointestinal tract in history (the presence of Helicobacter pylori infection);

- frequent use of alcohol.

Use of Movalis® contraindicated in pregnancy.

It is known that NSAIDs penetrate into breast milk, so the use of the drug Movalis® during breastfeeding is contraindicated.

As a drug inhibiting the synthesis of cyclooxygenase / prostaglandin, Movalis® may affect fertility and is therefore not recommended for women planning a pregnancy. meloxicam can lead to delayed ovulation. In this regard, for women who have problems with conception and are being examined for similar problems, it is recommended that Movalis be discontinued.®.

The drug is contraindicated in severe liver failure.

Patients with clinically stable cirrhosis of the liver do not require dose reduction.

The drug is contraindicated in severe renal failure (without hemodialysis).

Have patients with end-stage renal disease who are on hemodialysis, The dose of Movalis should not exceed 7.5 mg.

Have patients with minor or moderate renal impairment (CC more than 25 ml / min) dose reduction is not required.

Gastrointestinal ulcers, perforation, or bleeding can occur during treatment at any time, if there are alarming symptoms or a history of serious gastrointestinal complications, or in the absence of these signs. The consequences of these complications are generally more severe for the elderly.

When using NSAIDs, serious skin reactions such as exfoliative dermatitis, Stevens-Johnson syndrome, toxic epidermal necrolysis can develop. Therefore, special attention should be paid to patientsreporting the development of adverse effects on the skin and mucous membranes, as well as hypersensitivity reactions to the drug, especially if similar reactions were observed during previous courses of treatment. The development of such reactions is observed, as a rule, during the first month of treatment. In case of the first signs of skin rash, changes in the mucous membranes or other signs of hypersensitivity, the question of discontinuing Movalis®.

Cases are described when taking NSAIDs increase the risk of developing serious cardiovascular thrombosis, myocardial infarction, an attack of angina, possibly fatal. This risk increases with long-term use of the drug, as well as in patients with the above mentioned diseases in history and predisposed to such diseases.

NSAIDs inhibit kidney synthesis of prostaglandins, which are involved in maintaining renal perfusion. The use of NSAIDs in patients with reduced renal blood flow or a reduced volume of circulating blood may lead to decompensation of latent renal failure. After abolishing NSAIDs, the kidney function is usually restored to its original level. Elderly patients, patients with dehydration, congestive heart failure, liver cirrhosis, nephrotic syndrome or acute renal impairment, patientssimultaneously taking diuretics, ACE inhibitors, angiotensin II receptor antagonists, as well as patients who have undergone serious surgery that leads to hypovolemia. In such patients, diuresis and renal function should be carefully monitored at the beginning of therapy.

The use of NSAIDs in conjunction with diuretics can lead to sodium, potassium and water retention, as well as to a decrease in the natriuretic effect of diuretics. As a result, in predisposed patients, signs of heart failure or hypertension may be exacerbated. Therefore, careful monitoring of the condition of these patients is necessary, and adequate hydration should be maintained.

When using the drug Movalis® (as well as most other NSAIDs) an episodic increase in serum transaminase activity or other indicators of liver function is possible. In most cases, this increase was small and transient. If the identified changes are significant or do not decrease with time, Movalis® should be abolished, and monitoring of the identified laboratory changes should be carried out.

Weakened or exhausted patients may be worse tolerated by adverse events, and therefore, such patients should be carefully monitored.

Like other NSAIDs, Movalis® may mask the symptoms of the underlying infectious disease.

As a drug inhibiting cyclooxygenase / prostaglandin synthesis, Movalis® may affect fertility and is therefore not recommended for women who have difficulty conceiving. In this regard, for women undergoing screening for this reason, it is recommended that the administration of Movalis be taken.®.

In patients with weak or moderate renal insufficiency (CC more than 25 ml / min), dose adjustment is not required.

Patients with cirrhosis of the liver (compensated) do not require dose adjustment.

Special clinical studies of the effect of the drug on the ability to drive and mechanisms were not conducted. However, when driving and working with mechanisms, the possibility of developing dizziness, drowsiness, visual impairment or other disorders of the central nervous system should be taken into account. During the period of treatment, patients need to be careful when driving and engaging in other potentially hazardous activities that require increased concentration and psychomotor reactions.

Treatment: antidote not known.In case of drug overdose, symptomatic therapy should be used. It is known that Kolestiramine accelerates the elimination of meloxicam.

With the simultaneous use of other prostaglandin synthesis inhibitors with meloxicam, including GCS and salicylates (acetylsalicylic acid), increases the risk of gastrointestinal ulcers and gastrointestinal bleeding due to synergistic action. The combined use of meloxicam and other NSAIDs is not recommended.

Anticoagulants for oral administration, Heparin for systemic use, thrombolytic agents with simultaneous use with meloxicam increase the risk of bleeding. In the case of simultaneous use, careful monitoring of the blood coagulation system is necessary.

Anti-platelet drugs, serotonin reuptake inhibitors, while used with meloxicam, increase the risk of bleeding due to inhibition of platelet function. In the case of simultaneous use, careful monitoring of the blood coagulation system is necessary.

NSAIDs reduce tubular secretion of Methotrexate by the kidneys, thereby, increasing its concentration in plasma. The simultaneous use of meloxicam and methotrexate (at a dose of more than 15 mg per week) is not recommended. In the case of simultaneous use, careful monitoring of kidney function and blood formula is necessary. Meloxicam may increase the hematological toxicity of methotrexate, especially in patients with impaired renal function.

There is evidence that NSAIDs can reduce the effectiveness of intrauterine contraceptive devices, but this has not been proven.

The use of NSAIDs in patients receiving diuretics in the event of dehydration of patients is accompanied by the risk of developing acute renal failure.

NSAIDs reduce the effect of antihypertensive drugs (beta-blockers, ACE inhibitors, vasodilators, diuretics), due to inhibition of prostaglandins with vasodilating properties.

The combined use of NSAIDs and angiotensin II receptor antagonists enhances the effect of reducing glomerular filtration, thus, can lead to the development of acute renal failure, especially in patients with impaired renal function.

Kolestyramine, binding meloxicam in the digestive tract, leads to its more rapid elimination.

NSAIDs, by acting on renal prostaglandins, can enhance cyclosporine nephrotoxicity.

When used in conjunction with meloxicam drugs that have the known ability to inhibit CYP2C and / or CYP3A4 (or are metabolized with the participation of these enzymes), the possibility of pharmacokinetic interaction should be taken into account.

We can not exclude the possibility of interaction with antidiabetic drugs for oral administration.

With the simultaneous use of antacids, cimetidine, Digoxin and Furosemide, no significant pharmacokinetic interactions have been identified.

The drug should be stored in a dark place, out of the reach of children at a temperature not exceeding 30 ° C.