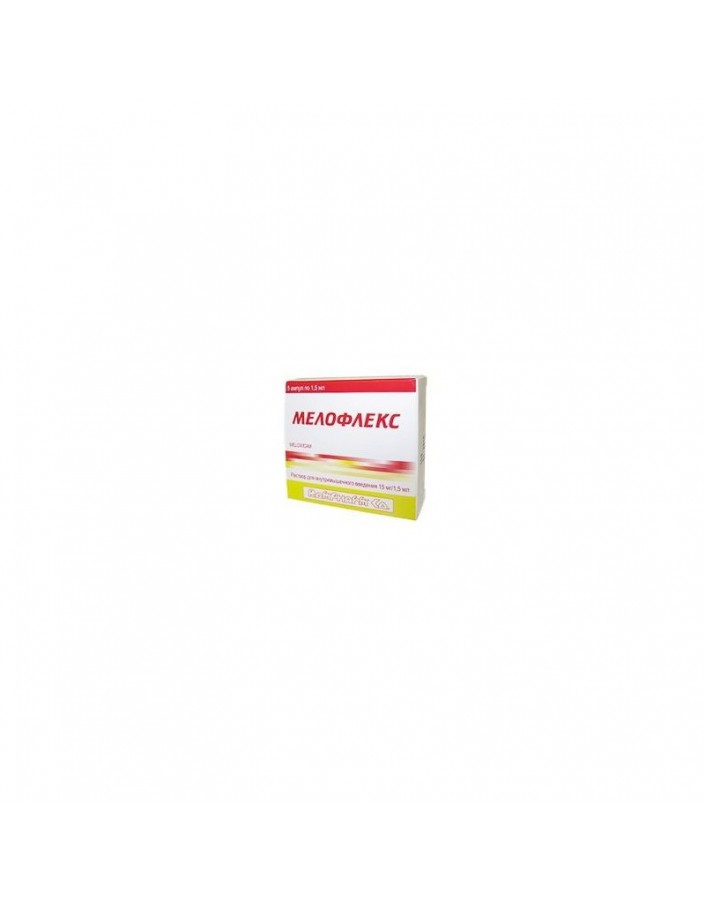 The solution for the / m the introduction of a yellow color with a greenish tint, transparent.

NSAIDs, refers to derivatives of enolic acid and has anti-inflammatory, analgesic and antipyretic effects.

In vivo, meloxicam inhibits prostaglandin synthesis at the site of inflammation to a greater extent than in the gastric mucosa or kidneys. These differences are associated with more selective inhibition of COX-2 compared with COX-1. Inhibition of COX-2 is believed to provide the therapeutic effect of NSAIDs, whereas inhibition of a constantly present COX-1 isoenzyme may be the cause of adverse reactions from the stomach and kidneys.

The selectivity of meloxicam against COX-2 is confirmed in various test systems, both in vitro and ex vivo. The selective ability of meloxicam to inhibit COX-2 is shown when using in vitro human whole blood as a test system. Ex vivo found that meloxicam (at doses of 7.5 mg and 15 mg) more actively inhibited COX-2, having a greater inhibitory effect on the production of prostaglandin E2, stimulated by lipopolysaccharide (reaction controlled by COX-2) than on the production of thromboxane involved in the process of coagulation blood (reaction controlled by TSOG-1). These effects depended on the magnitude of the dose. Ex vivo showed that meloxicam at recommended doses did not affect platelet aggregation and bleeding time, in contrast to Indomethacin, Diclofenac, Ibuprofen and Naproxen, which significantly suppressed platelet aggregation and increased bleeding time.

Metabolized in the liver to inactive metabolites.

Designed for symptomatic therapy, reducing pain and inflammation at the time of use, does not affect the progression of the disease.

The drug is injected deep into the / m. In / in contraindicated.

V / m drug administration is shown only during the first days of treatment. Further treatment is continued with the use of oral forms (tablets).

Osteoarthritis in the acute phase: 7.5 mg /, if the condition does not improve, you can increase the dose to 15 mg /

Rheumatoid arthritis, ankylosing spondylitis: 15 mg / Depending on the therapeutic effect, the dose can be reduced to 7.5 mg / You should not exceed the daily dose of meloxicam 15 mg.

In elderly patients, the recommended dose for long-term therapy of rheumatoid arthritis or ankylosing spondylitis is 7.5 mg / In elderly patients with an increased risk of side effects, therapy should be started with a dose of 7.5 mg /

In patients on dialysis, with severe renal insufficiency, the daily dose of meloxicam 7.5 mg cannot be exceeded. In patients with mild or moderate renal impairment (CC more than 25 ml / min), there is no need to reduce the dose.

In patients with mild or moderately impaired liver function, there is no need to reduce the dose of the drug.

From the side of blood-forming organs: often - anemia; Infrequently - change in blood formula, incl. leukopenia, thromocytopenia.

On the part of the respiratory system: infrequently - the occurrence of attacks of bronchial asthma in persons allergic to Acetylsalicylic acid or other NSAIDs.

Since the cardiovascular system: often - peripheral edema; infrequently - increased blood pressure, palpitations, flushing of the skin of the face.

From the urinary system: infrequently - hypercreatininemia and / or an increase in the concentration of urea in the blood serum; rarely, acute renal failure; connection with the reception of meloxicam has not been established - interstitial nephritis, albuminuria, hematuria.

- a combination of bronchial asthma, recurrent polyposis of the nose and paranasal sinuses and intolerance to acetylsalicylic acid and pyrazolone drugs;

- peptic ulcer of the stomach and duodenum (in the acute phase);

- Hypersensitivity to other NSAIDs.

Suppression of prostaglandin synthesis can have an undesirable effect on pregnancy and fetal development. Thus, Meloflex Rompharm is contraindicated during pregnancy.

Meloxicam is excreted in breast milk, so Meloflex Rompharm is contraindicated during lactation. At the time of taking the drug must stop breastfeeding.

As with the use of other NSAIDs, gastrointestinal bleeding, ulcers and perforations,Potentially life-threatening patients can occur during treatment at any time, either in the presence of alarming symptoms or information about serious gastrointestinal complications in history, or in the absence of these signs. The consequences of these complications are generally more severe in the elderly.

Particular attention should be paid to patients reporting the development of adverse effects on the skin and mucous membranes. In such cases, the question of discontinuing the use of the drug Meloflex Rompharm should be considered.

With a persistent and significant increase in transaminases and changes in other indicators of liver function, the drug should be canceled and control tests should be conducted.

In patients with an increased risk of side effects, treatment begins with a dose of 7.5 mg. In the terminal stage of chronic renal failure in patients on dialysis, the dose should not exceed 7.5 mg /

There are no data on the negative effect of the drug on the ability to drive vehicles or work with mechanisms. For disorders of the central nervous system (reduced visual acuity, fatigue, dizziness or other disorders), these activities are contraindicated.

Treatment: symptomatic therapy. Forced diuresis, alkalization of urine, hemodialysis are ineffective due to the high degree of binding of meloxicam with plasma proteins. There is no specific antidote

Simultaneous administration of several NSAIDs (including salicylates) may increase the risk of erosive and ulcerative lesions of the gastrointestinal tract due to the synergistic effect, so the use of meloxicam with other NSAIDs is not recommended.

When using meloxicam with diuretics, the patient needs to consume a sufficient amount of fluid, and regular medical monitoring of renal function is required before and during the treatment process.

With the combined use of thrombolytic and antithrombotic drugs with meloxicam, an increased risk of bleeding is possible (periodic monitoring of blood coagulation parameters is necessary).

Simultaneous use with ACE inhibitors and other antihypertensive drugs in elderly patients with symptoms of dehydration may trigger the development of acute renal failure. In addition, the combined use of meloxicam may reduce their hypotensive effect.

Meloxicam can reduce the effectiveness of contraceptive agents.

NSAIDs can increase the concentration of lithium in the serum to a toxic level (a decrease in the release of lithium by the kidneys). Therefore, the simultaneous use of meloxicam with lithium preparations is not recommended. If necessary, their combined use should carefully monitor the lithium content in the serum before, during, and after the end of the course of therapy with meloxicam and lithium preparations.

With simultaneous use with Methotrexate increases the negative impact on the hematopoietic system (the risk of anemia and leukopenia). Periodic control of hemogram is required.

Kolestyramine accelerates the elimination of meloxicam, increasing the clearance of meloxicam by 50%, reduces its T1 / 2 by 13 ± 3 h. Such an interaction has clinical significance.

When taken simultaneously with antacids, cimetidine and Digoxin, no significant clinical interaction is noted.

With the simultaneous use of meloxicam with selective serotonin reuptake inhibitors, the risk of gastrointestinal bleeding increases.

The drug should be stored out of the reach of children, protected from light, at a temperature not exceeding 25 ° C. Shelf life - 4 years.