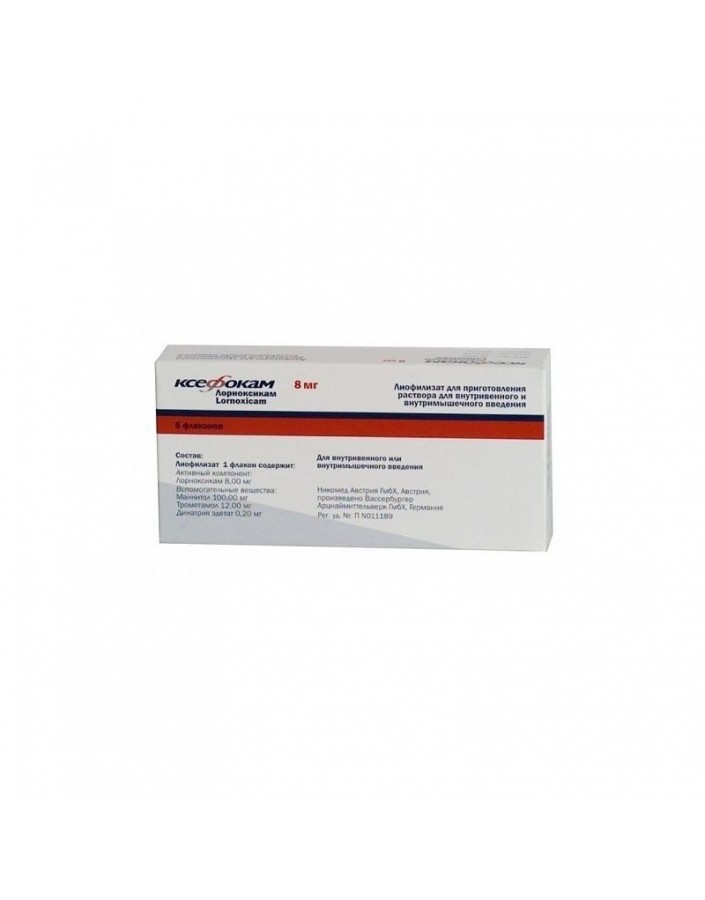 - short-term treatment of acute pain from mild to moderately severe.

The drug is used parenterally.

At postoperative pain the drug is administered in / m or / in, with acute lumbago / ischalgia - i / m

The initial dose may be 8 mg or 16 mg. With insufficient analgesic effect of the drug at a dose of 8 mg, you can additionally enter the same dose.

The maximum daily dose is 16 mg.

The drug should be used in the minimum effective dose of the shortest possible course.

The solution for injection is prepared immediately before use by dissolving the contents of one vial (8 mg of Xefokam powder) with water for injection (2 ml). After preparation of the solution, the needle is replaced.

The solution prepared in this way is introduced in / in or in a / m. Duration in / in the introduction of the solution should be at least 15 seconds, in / m - at least 5 seconds.

In the treatment of NSAIDs, the most frequent adverse reactions from the gastrointestinal tract; may cause edema, hypertension and heart failure. The use of such drugs may be associated with a slight increase in the risk of arterial thrombotic events.

When using Xefocam, the following side effects may occur.

From the organ of hearing and the labyrinth: sometimes dizziness, tinnitus.

On the part of the respiratory tract: sometimes rhinitis; rarely - shortness of breath, cough, bronchospasm.

From the urinary system: rarely - nocturia, impaired urination, an increase in blood levels of urea nitrogen and creatinine.

- A complete or incomplete combination of asthma, recurrent nasal polyposis or paranasal sinuses and intolerance to Acetylsalicylic acid and other NSAIDs (including a history of);

- hemorrhagic diathesis or blood clotting disorders, as well as after operations with a risk of bleeding or incomplete hemostasis;

- erosive and ulcerative changes of the gastric or duodenal mucosa, active Gastrointestinal bleeding; cerebrovascular or other bleeding;

- recurrent gastric ulcer or repeated bleeding from the gastrointestinal tract;

- data on previous bleeding from the gastrointestinal tract associated with taking NSAIDs;

- heart failure in the stage of decompensation;

- children and adolescents up to 18 years (due to the lack of clinical data on the use of the drug in this age group);

- hypersensitivity / allergy to the components of the drug.

Simultaneous treatment with NSAIDs and tacrolimus may increase the risk of nephrotoxicity.

The simultaneous use of NSAIDs and Heparin in combination with spinal or epidural anesthesia increases the risk of spinal / epidural hematomas.

Ksefokam is contraindicated for use during pregnancy and lactation (breastfeeding).

The use of the drug may adversely affect female fertility and is not recommended for women planning a pregnancy.

WITH caution: age over 65 years.

The risk of an ulcerogenic effect of the drug can be reduced by simultaneous administration of proton pump inhibitors and synthetic analogs of prostaglandins.In the event of bleeding from the gastrointestinal tract, taking the drug should be immediately stopped and appropriate emergency measures should be taken. Especially carefully it is necessary to monitor the condition of those patients with gastrointestinal pathology who for the first time receive a course of treatment with the drug Ksefokam.

Like other oxycams, Ksefokam inhibits platelet aggregation, so an increase in bleeding time is possible. When using the drug, it is necessary to strictly control the condition of patients in need of an absolutely normal functioning of the blood coagulation system (for example, patients who are to undergo surgery) who have a violation of the blood coagulation system or who receive drugs that suppress coagulation (including low doses of heparin) timely detect signs of bleeding.

If there are signs of liver damage (skin itching, jaundice of the skin, nausea, vomiting, abdominal pain, dark urine, increased liver transaminases), stop taking the drug and consult your doctor.

The drug can change the properties of platelets, but does not replace the prophylactic action of acetylsalicylic acid in cardiovascular diseases.

Patients with impaired renal function caused by large blood loss or severe dehydration, Ksefokam, as an inhibitor of prostaglandin synthesis, can be appointed only after the elimination of hypovolemia and the associated risk of reducing renal perfusion.

Xefocam (like other NSAIDs) can cause an increase in urea and creatinine concentrations in the blood, as well as water retention, sodium, peripheral edema, hypertension and other early signs of nephropathy. Long-term treatment of such patients with Ksefokam can lead to the following consequences: glomerulonephritis, papillary necrosis and nephrotic syndrome with a transition to acute renal failure.

In elderly patients, as well as in patients suffering from hypertension and / or obesity, it is necessary to control the level of blood pressure.

It is especially important to monitor kidney function in elderly patients, as well as in patients receiving diuretics at the same time; simultaneously receiving medications that can cause kidney damage.

With prolonged use of the drug Ksefokam need to periodically monitor hematological parameters, as well as the function of the kidneys and liver.

Currently, there is no data on overdose of Xefocam, which would allow to establish its consequences or suggest specific measures to eliminate them.

Symptoms: assumed more frequent and severe side effects from the gastrointestinal tract, central nervous system and signs of renal failure. Serious symptoms are ataxia, convulsions, damage to liver and kidney function, possibly a violation of coagulation.

Treatment: if overdose is suspected, Xefocam administration should be discontinued. Due to the fact that t1/2 Lornoxicam is about 4 hours, it is rapidly excreted from the body. Lornoxicam cannot be removed from the body through dialysis. Currently, a specific antidote does not exist. The usual emergency measures should be applied and symptomatic treatment should be carried out.

With simultaneous use of the drug Ksefokam with cimetidine increases the concentration of lornoxicam in the plasma. Interaction with Ranitidine and antacid drugs was not detected.

With simultaneous use of the drug Ksefokam with anticoagulants or inhibitors of platelet aggregation may increase bleeding time and increase the risk of bleeding (need to control MHO).

Simultaneous use with fenprocumone reduces its effectiveness.

With the simultaneous use of NSAIDs and heparin in combination with spinal / epidural anesthesia increases the risk of spinal or epidural hematomas.

With simultaneous use of Xefocam decreases the hypotensive effect of beta-blockers and ACE inhibitors.

Ksefokam reduces the diuretic effect and the hypotensive effect of diuretics.

The simultaneous use of quinolone antibiotics increases the risk of convulsive syndrome.

With simultaneous use with other NSAIDs or GCS increases the risk of bleeding from the gastrointestinal tract.

When used simultaneously with selective serotonin reuptake inhibitors (for example, citalopram, fluoxetine, paroxetine, sertraline) increases the risk of bleeding from the gastrointestinal tract.

Ksefokam can cause an increase in Cmax lithium in the plasma and, thereby, enhance the known side effects of lithium.

Ksefokam able to enhance the hypoglycemic effect of sulfonylurea derivatives.

With simultaneous use of Xefocam with corticotropin, potassium preparations, alcohol increases the risk of side effects from the gastrointestinal tract.

With simultaneous use of Xefocam with cefamandol, cefoperazone, cefotetanom, valproic acid increases the risk of bleeding.

With simultaneous use with tacrolimus increases the risk of nephrotoxicity.

The drug should be stored out of the reach of children, protected from light at a temperature not higher than 25 ° C.