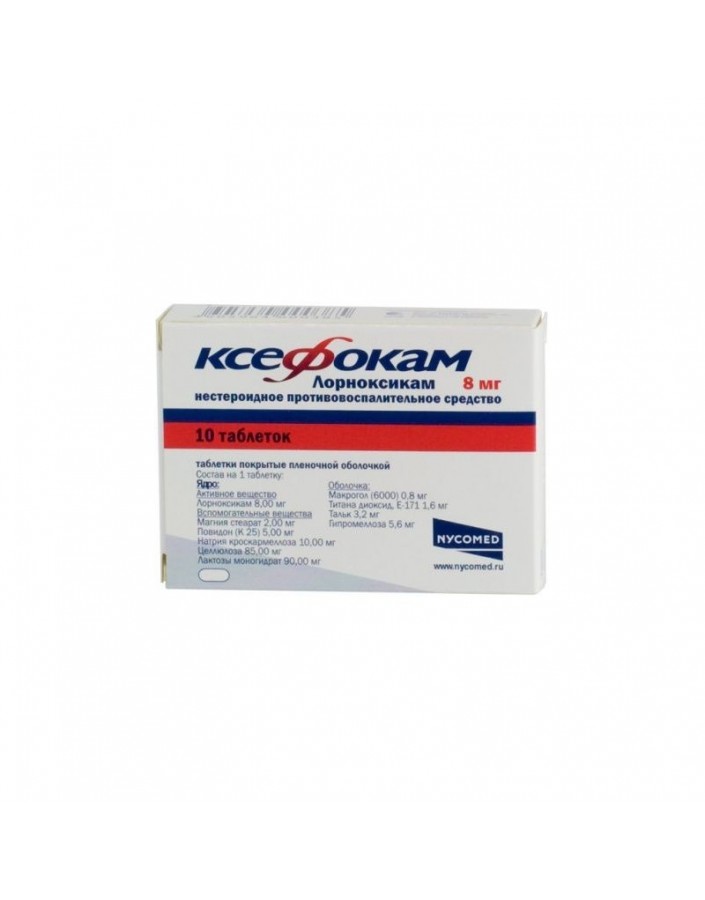 NSAIDs, belongs to the class oxycam. It has a pronounced analgesic and anti-inflammatory effect.

The basis of the mechanism of action of lornoxicam is the suppression of the synthesis of prostaglandins, due to the inhibition of the activity of COX isoenzymes. In addition, lornoxicam inhibits the release of oxygen radicals from activated leukocytes.

Ksefokam does not have an opiate-like effect on the central nervous system, does not inhibit respiration, does not cause drug dependence.

Lornoxicam is rapidly and completely absorbed from the gastrointestinal tract after oral administration. Cmax in plasma is reached in about 1-2 hours. The absolute bioavailability of lornoxicam is 90-100%.

Eating reduces Cmax by 30% and increases Tmax up to 2.3 h

The binding of lornoxicam with plasma proteins, mainly with the albumin fraction, is 99% and does not depend on its concentration.

Lornoxicam is present in plasma mainly unchanged and, to a lesser extent, in the form of a hydroxylated metabolite that does not possess pharmacological activity. Lornoxicam is completely metabolized in the liver with the participation of the CYP2C9 isoenzyme.

T1/2 the average is 4 hours and does not depend on the concentration of lornoxicam. Approximately 1/3 of its metabolites excreted by the kidneys and 2/3 with bile.

In the elderly, as well as in patients with renal or hepatic insufficiency, no significant changes in the pharmacokinetic parameters of lornoxicam were found.

At inflammatory and degenerative rheumatic diseases The recommended starting dose is 12 mg / day. The average dose is 8-16 mg / day, depending on the patient's condition.

The duration of therapy depends on the nature and course of the disease.

Tablets are taken orally before meals with a glass of water.

Patients with gastrointestinal diseases, impaired renal function or the liver to patients elderly (over 65), after extensive operations, the maximum dose is 12 mg / day in 3 doses.

To reduce the risk of adverse events from the gastrointestinal tract, the drug should be used in the minimum effective dose of the shortest possible course.

On the part of the respiratory system: pharyngitis, rhinitis, dyspnea, cough, bronchospasm.

- A complete or incomplete combination of asthma, recurrent nasal polyposis or paranasal sinuses and intolerance to Acetylsalicylic acid and other NSAIDs (including a history of);

- hemorrhagic diathesis or bleeding disorders, as well as those who have undergone surgery, with the risk of bleeding or incomplete hemostasis;

- erosive and ulcerative changes of the gastric or duodenal mucosa;

- recurrent gastric ulcer or repeated bleeding from the gastrointestinal tract;

- bleeding from the gastrointestinal tract associated with taking NSAIDs in history;

- children's age up to 18 years (there are no clinical data on the use of this age group);

Ksefokam is contraindicated for use during pregnancy and lactation (breastfeeding).

The use of the drug may adversely affect female fertility.

The risk of an ulcerogenic effect of the drug can be reduced by the simultaneous administration of proton pump inhibitors. In the event of bleeding in the gastrointestinal tract, taking the drug should be immediately stopped and appropriate emergency measures should be taken.Especially carefully it is necessary to monitor the condition of those patients with gastrointestinal pathology, who for the first time receive a course of treatment with the drug Ksefokam.

Like other oxycams, Ksefokam inhibits platelet aggregation, so an increase in bleeding time is possible. When using the drug, it is necessary to strictly control the condition of patients in need of an absolutely normal functioning of the blood coagulation system (for example, patients who are to undergo surgery) who have a disruption of the blood coagulation system or who are receiving drugs that suppress coagulation (including low doses of heparin). timely detect signs of bleeding.

If there are signs of liver damage (skin itching, jaundice of the skin, nausea, vomiting, abdominal pain, dark urine, increased liver transaminases), stop taking the drug and consult your doctor.

The drug can change the properties of platelets, but does not replace the prophylactic action of acetylsalicylic acid in cardiovascular diseases.

Patients with impaired renal function caused by large blood loss or severe dehydration, Ksefokam, as an inhibitor of prostaglandin synthesis, can be appointed only after the elimination of hypovolemia and the associated risk of reducing renal perfusion.

Xefocam (like other NSAIDs) can cause an increase in urea and creatinine concentrations in the blood, as well as water retention, sodium, peripheral edema, hypertension and other early signs of nephropathy. Long-term treatment of such patients with Ksefokam can lead to the following consequences: glomerulonephritis, papillary necrosis and nephrotic syndrome with a transition to acute renal failure.

In elderly patients, as well as in patients suffering from hypertension and / or obesity, it is necessary to control the level of blood pressure.

It is especially important to monitor kidney function in elderly patients, as well as in patients receiving diuretics at the same time; simultaneously receiving medications that can cause kidney damage.

With prolonged use of the drug Ksefokam need to periodically monitor hematological parameters, as well as the function of the kidneys and liver.

Symptoms: may increase the described side effects of Xefocam.

Treatment: conduct symptomatic therapy. To reduce the absorption, it is advisable to use Activated carbon immediately after taking Xefocam, to prevent lesions of the gastrointestinal mucosa, anti-ulcer drugs can be used. Dialysis is ineffective.

With simultaneous use of the drug Ksefokam with cimetidine increases the concentration of lornoxicam in the plasma. Interaction with Ranitidine and antacid drugs was not detected.

With simultaneous use of the drug Ksefokam with anticoagulants or inhibitors of platelet aggregation may increase bleeding time and increase the risk of bleeding (need to control MHO).

Ksefokam can reduce the hypotensive effects of beta-blockers and ACE inhibitors.

Ksefokam reduces the diuretic effect and the hypotensive effect of diuretics.

The simultaneous use of quinolone antibiotics increases the risk of convulsive syndrome.

With simultaneous use with other NSAIDs or GCS increases the risk of bleeding from the gastrointestinal tract.

When used simultaneously with selective serotonin reuptake inhibitors (for example, citalopram, fluoxetine, paroxetine, sertraline) increases the risk of bleeding from the gastrointestinal tract.

Ksefokam can cause an increase in Cmax lithium in the plasma and, thereby, enhance the known side effects of lithium.

Ksefokam able to enhance the hypoglycemic effect of sulfonylurea derivatives.

With simultaneous use of Xefocam with corticotropin, potassium preparations, alcohol increases the risk of side effects from the gastrointestinal tract.

With the simultaneous use of Xefocam with cefamandol, cefoperazone, cefotetan, valproic acid increases the risk of bleeding.

List B. The drug should be kept out of the reach of children at a temperature not exceeding 25 ° C.