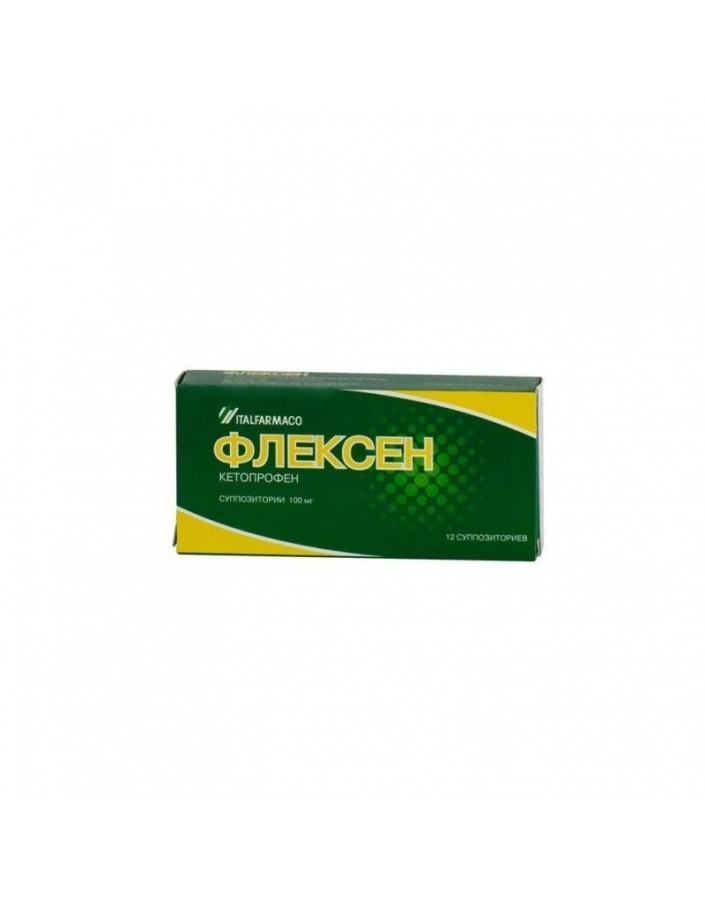 In a balloon-free contour package 6 suppositories. In a cardboard bundle 2 packs.

Flexen - NSAID, a derivative of propionic acid. It has an analgesic, anti-inflammatory and antipyretic effect. The mechanism of action is associated with inhibition of the activity of COX - the main enzyme in the metabolism of arachidonic acid, which is a precursor of prostaglandins, which play a major role in the pathogenesis of inflammation, pain and fever. The pronounced analgesic effect of ketoprofen is due to two mechanisms: peripheral (indirectly, through suppression of prostaglandin synthesis) and central (due to inhibition of prostaglandin synthesis in the central and peripheral nervous system, as well as the effect on the biological activity of other neurotropic substances that play a key role in the release of pain mediators in the spinal cord brain). In addition, ketoprofen has anti-bradykinin activity, stabilizes lysosomal membranes, and causes significant inhibition of neutrophil activity in patients with rheumatoid arthritis. Suppresses platelet aggregation.

The use of the drug is contraindicated during pregnancy and during breastfeeding.

Rectally 1 suppository 1-2 times / day. The maximum daily dose of the drug should not exceed 300 mg.

Flexen is used with caution simultaneously with acetylsalicylic acid and other NSAIDs, lithium preparations, antihypertensive drugs, diuretics, Methotrexate and antidiabetic agents. Against the background of the use of the drug Flexen for systemic use, alcohol should be avoided.

Since ketoprofen is largely bound to proteins, doses of anticoagulants, diphenylhydantoin, or sulfur-containing drugs should be reduced.

Treatment: there is no specific antidote; if necessary, conduct symptomatic therapy.