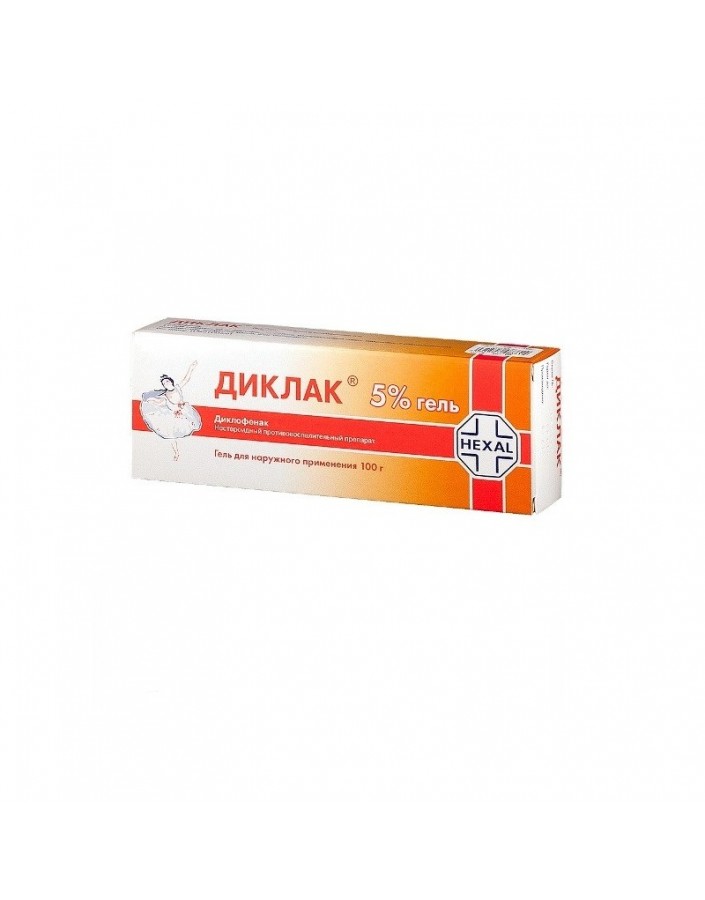 Diclac is a nonsteroidal anti-inflammatory agent (NSAID). It has anti-inflammatory, analgesic and antipyretic effects. Inhibits the COX enzyme in the cascade of arachidonic acid metabolism and violates the biosynthesis of prostaglandins.
When applied externally, it has anti-inflammatory and analgesic effects. Reduces and relieves pain at the site of application of the ointment (including joint pain at rest and when moving), reduces morning stiffness and swelling of joints. Contributes to increased range of motion.

- Pathological changes in the blood picture of unclear genesis;
- gastric ulcer and duodenal ulcer;
- destructive-inflammatory bowel disease in the acute phase;
- pregnancy;
- the period of lactation (breastfeeding should be abandoned);
- children's and teenage age up to 12 years;
- children's age up to 6 years;
- hypersensitivity to Acetylsalicylic acid or other NSAIDs (including the "aspirin triad");
- Hypersensitivity to Diclofenac and other components of the drug;
- inflammation of the rectum - proctitis

Diclac can only be taken under the strict supervision of a physician after a thorough assessment of the benefit / risk ratiounder the following conditions: congenital hematopoietic disorder (induced porphyria); systemic lupus erythematosus and other systemic diseases of connective tissue; the presence of complaints on the function of the gastrointestinal tract, or in case of suspected gastric or duodenal ulcer, as well as erosive and ulcerative lesions (ulcerative colitis, Crohn's disease); in patients with previous kidney disease and / or severe liver dysfunction; with severe hypertension and / or heart failure; in elderly patients; immediately after surgery.

With great care and only under the direct supervision of a physician, Diclac can be used in patients with asthma, allergic rhinitis, polyps of the nasal mucosa, as well as in chronic obstructive respiratory diseases and chronic infections of the respiratory tract due to the risk of an asthma attack, angioedema or urticaria.

At a dose of 2-4 g, apply a thin layer on the skin over the focus of inflammation and gently rub, the frequency of application is 2-3 times / day.
The maximum daily dose of ointment should not exceed 8 g.
The course of treatment is not more than 14 days. The need for a more prolonged use of the drug is determined by the doctor.

Diclac should be avoided on the damaged surface of the skin, open wounds, eyes and mucous membranes.
The use of Diclac in the form of a gel is possible only on prescription in the following cases: a history of gastric ulcer and duodenal ulcer; abnormal liver and kidney function; severe violations of the hematopoietic system; bronchial asthma, rhinitis, polyps of the nasal mucosa; allergic reactions in history.
With caution, use the drug simultaneously with other NSAIDs.
Use in pediatrics
If necessary, the use of the drug in the form of ointment in children under 6 years of age requires the supervision of a physician.
Influence on ability to driving of the car and control of mechanisms
Due to the fact that the use of the drug in high doses may develop such side effects as dizziness and fatigue, in some cases the ability to drive a car or other moving objects is impaired. These phenomena are intensified while taking alcohol.

Symptoms: the clinical picture is determined by disorders of the CNS (headache, dizziness, irritability, hyperventilation with increased convulsive readiness, in children - myoclonic convulsions) and disorders of the digestive system (abdominal pain, nausea, vomiting; bleeding from the gastrointestinal tract and / or abnormal liver function); possible impaired renal function.
Treatment: symptomatic therapy, careful monitoring of the patient's condition. The specific antidote is not known.

Store in a dry, dark place at a temperature not higher than 25 C.