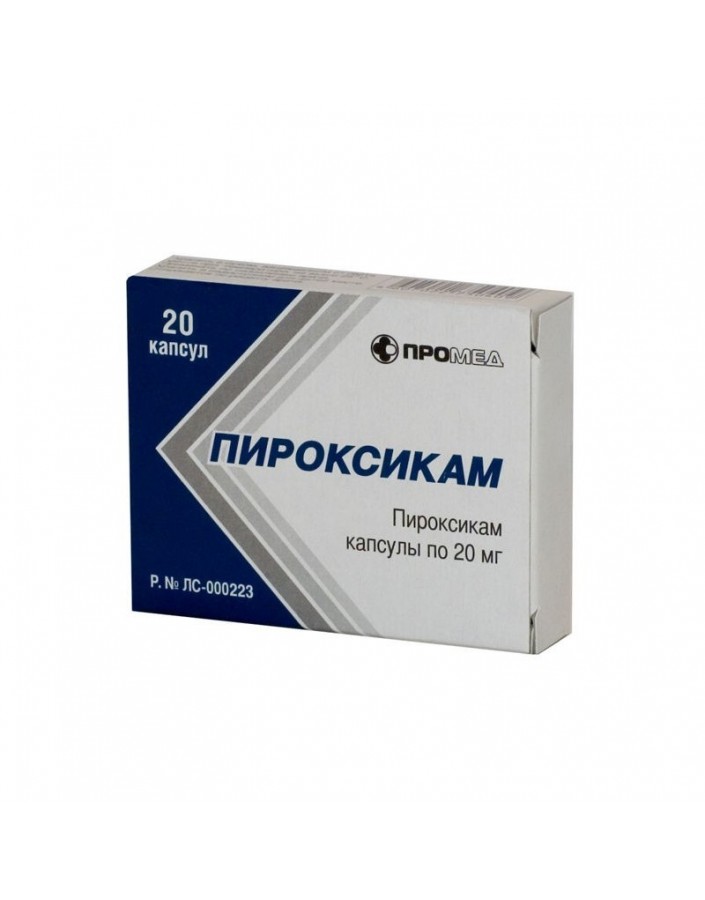 In a cell contour packaging 10 capsules. In a cardboard bundle 2 packs.

The analgesic effect appears after 30 minutes. after oral administration.

After a single dose, the effect lasts for 24 hours.

- Hypersensitivity (including to other nonsteroidal anti-inflammatory drugs).
- "Aspirinovaya" asthma.
- "Aspirin" triad (a combination of bronchial asthma, recurrent nasal pollinosis and paranasal sinuses, and intolerance to Acetylsalicylic acid and pyrazolone drugs).
- Violations of blood formation.
- Various disorders of hemostasis (including hemophilia).
- Erosive and ulcerative lesions of the gastrointestinal tract in the acute phase.
- Bleeding from the gastrointestinal tract.
- Pregnancy.
- Lactation period.
- Children's age up to 14 years.

Contraindicated use during pregnancy and lactation.

In acute diseases of the musculoskeletal system, the first two days take 40 mg per day, and then within 1-2 weeks 20 mg per day.

Other: Edema of the legs and feet, increased sweating, increased concentration of urea, hypoglycemia.

The simultaneous use of several nonsteroidal anti-inflammatory drugs increases the risk of side effects, while the therapeutic effect does not improve.

Patients with impaired function of the gastrointestinal tract, after extensive surgical interventions, in the elderly, patients with bronchial asthma and chronic bronchospastic diseases in history, it is necessary to monitor the cellular composition of the blood, renal function and liver.

If a peptic ulcer or bleeding from the gastrointestinal tract occurs, treatment should be stopped.

If any visual impairment occurs, consult a specialist.

In women, a reduction in the contraceptive effect inside the uterine helix is ​​possible due to the effect of piroxicam on myometrial tone.

Recommendations for use in children are not currently developed.

During the period of treatment, it is necessary to refrain from engaging in potentially hazardous activities that require increased concentration of attention and quickness of psychomotor reactions.

During treatment should be excluded the use of ethanol.

The simultaneous use of piroxicam and lithium preparations can increase the content of lithium in the blood serum.

Piroxicam may weaken the effect of diuretics and antihypertensive drugs. Simultaneous use of potassium-sparing diuretics and potassium preparations can cause hyperkalemia.

The simultaneous use of piroxicam and glucocorticosteroids or nonsteroidal anti-inflammatory drugs increases the risk of bleeding from the digestive tract.

The simultaneous intake of acetylsalicylic acid causes a decrease in the content of piroxicam in the serum.

Taking piroxicam 24 hours before or after taking Methotrexate increases the serum concentration of the latter and increases its toxicity.

Simultaneous use of piroxicam together with oral anticoagulants can cause blood clotting disorders.