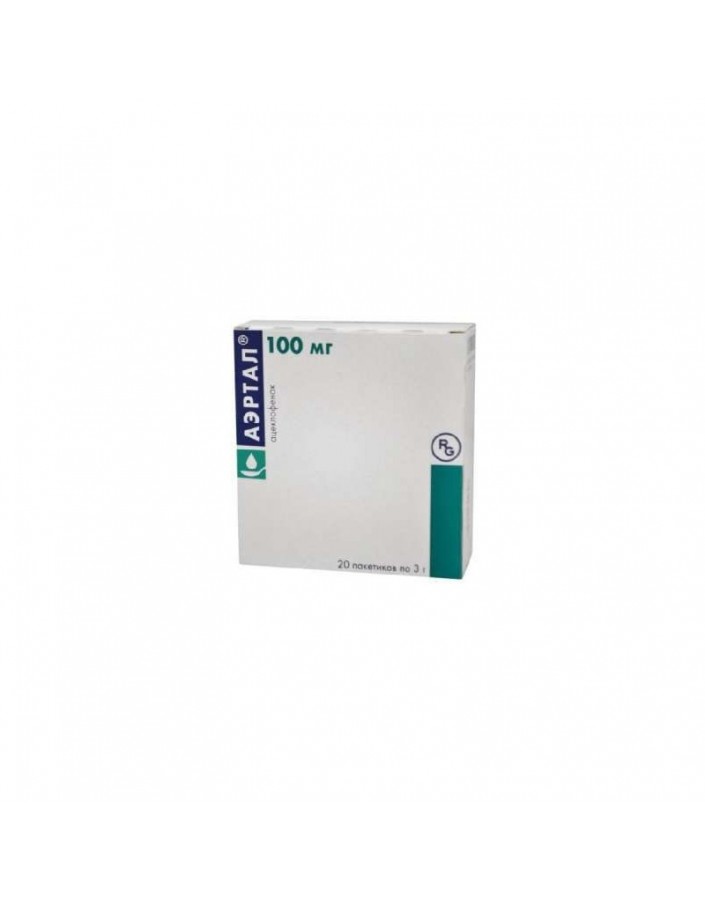 Powder for the preparation of suspensions for oral administration Aertal (Airtal)

Inhibits the synthesis of PG and thus affects the pathogenesis of inflammation, the occurrence of pain and fever. In rheumatic diseases, the anti-inflammatory and analgesic effect of aceclofenac significantly reduces the severity of pain, morning stiffness, and swelling of the joints, which improves the functional state of the patient.

T1 / 2 - 4 h. Excreted by the kidneys, mainly in the form of hydroxy derivatives (about 2/3 of the administered dose).

The drug is contraindicated during pregnancy (see "Contraindications"). Information on the use of Aertal during pregnancy is not available. Regular use of NSAIDs in the last trimester of pregnancy can lead to a decrease in tone and weaker contractions of the uterus. The use of NSAIDs can lead to premature closure of the Botallova duct in the fetus and, possibly, to prolonged pulmonary hypertension in the newborn, delayed onset of labor and increase the length of labor.  Aertal should also not be taken during lactation.

On the part of the liver: a transient increase in the activity of transaminases in the blood, rarely - hepatitis, in some cases - fulminant hepatitis.

On the part of the hematopoietic system: leukopenia, isolated cases of thrombocytopenia, agranulocytosis, hemolytic anemia, aplastic anemia are described.

Treatment: in case of overdose, gastric lavage, administration of Activated carbon, symptomatic therapy are indicated. There is no specific antidote.Forced diuresis, hemodialysis, blood transfusion are ineffective.

With simultaneous use with Aertal:

digoxin, phenytoin or lithium preparations - the plasma levels of these drugs may increase

diuretics and antihypertensives - the effect of these agents may be weakened

antidiabetic agents - can cause both hypo-and hyperglycemia. With this combination of means, it is necessary to control the level of blood sugar

acetylsalicylic acid - the concentration of aceclofenac in the blood decreases

antiplatelet agents and anticoagulants - the risk of bleeding increases (regular monitoring of blood clotting is necessary).

During the period of drug treatment should be systematically monitored patterns of peripheral blood, liver, kidney, feces for the presence of blood.Patients taking the drug should refrain from activities that require increased attention and quick mental and motor reactions, alcohol consumption.

Due to the important role of PGs in maintaining renal blood flow, special care should be taken when prescribing to patients with cardiac or renal failure, elderly people taking diuretics, and patients with reduced BCC (for example, after extensive surgery). If aceclofenac is prescribed in such cases, it is recommended to monitor renal function. In patients with liver failure, the kinetics and metabolism are different from similar processes in patients with normal liver function.

To reduce the risk of adverse events from the gastrointestinal tract, use the minimum effective dose of the shortest possible course.

Patients suffering from dizziness and other disorders of the central nervous system, in the period of receiving Aertal should refrain from driving a car and working with dangerous machinery.