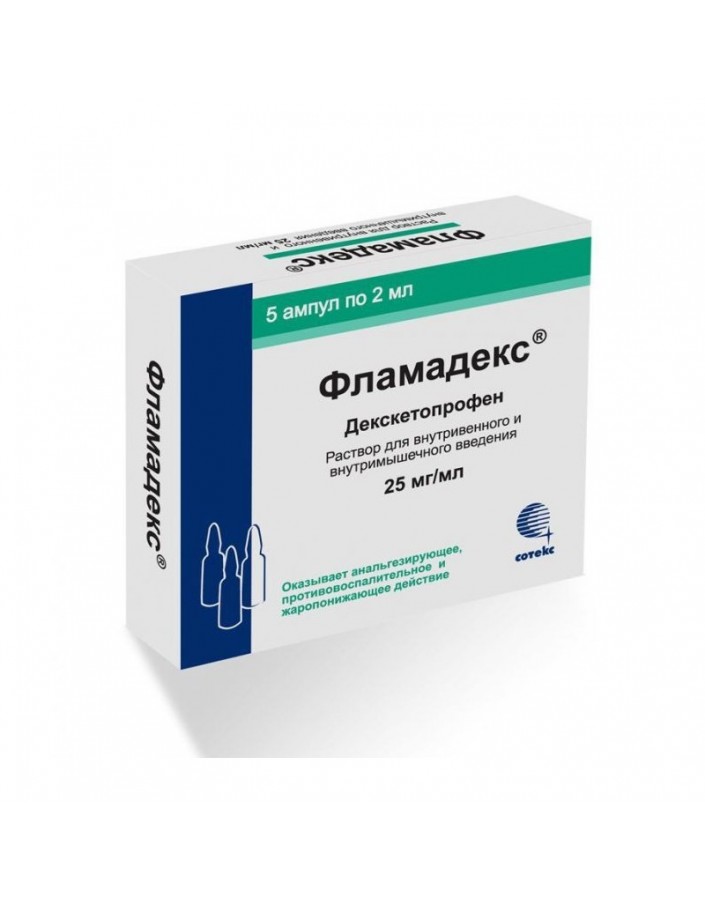 Pharmaceutical action: Nonsteroidal anti-inflammatory drug (NSAIDs), a derivative of propionic acid. It has an analgesic, anti-inflammatory and antipyretic effect. The mechanism of action is associated with the inhibition of prostaglandin synthesis at the level of cyclooxygenase-1 and cyclooxygenase-2.
Analgesic effect occurs 30 minutes after parenteral administration. The duration of the analgesic effect after administration at a dose of 50 mg is about 4-8 hours.
When combined with opioid analgesics, dexketoprofen significantly (up to 30-45%) reduces the need for opioids.
Pharmacokinetics: Absorption After intramuscular (IM) administration of dexketoprene, the maximum concentration (Cmax) in blood serum is reached on average after 20 minutes (10-45 minutes). The area under the concentration-time curve (AUC) after a single injection at a dose of 25-50 mg is proportional to the dose, as with the / m, and with intravenous (iv) administration. The corresponding pharmacokinetic parameters are similar after a single and repeated intramuscular or intravenous injection, which indicates the absence of drug accumulation.
Distribution Dexketoprofen is characterized by a high level of plasma protein binding (99%). The average value of Vd is less than 0.25 l / kg, the half-time is about 0.35 hours.
Withdrawal The metabolism of dexketoprofen mainly occurs by conjugation with glucuronic acid, followed by excretion by the kidneys. The elimination half-life (T1 / 2) of dexketoprofen trometamol is about 1-2.7 hours. Pharmacokinetics in special clinical cases In elderly people, an increase in the duration of T1 / 2 is observed (both after a single dose and after repeated i / m ) on average up to 48% and a decrease in the total clearance of the drug.

- relief of pain syndrome of various genesis (including postoperative pain, pain in bone metastases, post-traumatic pain, pain in renal colic, algomenorrhea, sciatica, sciatica, neuralgia, toothache);
- symptomatic treatment of acute and chronic inflammatory, inflammatory-degenerative and metabolic diseases of the musculoskeletal system (including rheumatoid arthritis, osteoarthritis, spondyloarthritis: ankylosing spondylitis, reactive arthritis, psoriatic arthritis).
The drug is intended for symptomatic therapy, reducing pain and inflammation at the time of use, does not affect the progression of the disease.

Flamadeks® should be used with caution in patients with a history of allergies. Patients with symptoms of gastrointestinal disturbances or with gastrointestinal tract history need medical supervision, especially for gastrointestinal bleeding. In cases of development of gastrointestinal bleeding in patients taking dexketoprofen, the drug is immediately canceled.
It should be carefully prescribed the drug to patients at the same time taking drugs that may increase the risk of ulcers or bleeding: corticosteroids, anticoagulants (for example, warfarin), selective serotonin reuptake inhibitors or antiplatelet agents (including acetylsalicylic acid).
Dexketoprofen can cause reversible inhibition of platelet aggregation and increase bleeding time.
Flamadex® should be carefully prescribed to patients with chronic heart failure I-II functional class according to NYHA.
Similarly to other NSAIDs, Flamadex® can cause an increase in plasma creatinine and nitrogen, have a negative effect on the urinary system, leading to the development of glomerulonephritis, interstitial nephritis, papillary necrosis, nephrotic syndrome and acute renal failure.
As with the use of other NSAIDs, there may be a slight transient increase in the performance of some liver samples, a significant increase in the activity of AST and ALT in blood serum. At the same time, the control of liver and kidney functions is necessary in elderly patients. In the case of a significant increase in the corresponding indicators Flamadex® should be canceled.
Flamadex® should be used with caution in patients with impaired blood formation, patients with systemic lupus erythematosus or other connective tissue diseases.
Like other NSAIDs, Flamadex® can mask the symptoms of infectious diseases. Reported single cases of exacerbation of infectious processes localized in soft tissues with the use of NSAIDs. Therefore, medical supervision of patients with signs of bacterial infection or deterioration during dexketoprofen treatment is required.
Caution should be exercised in the appointment of the drug to patients with impaired liver, kidney, heart, or with conditions that may cause fluid retention in the body. In these patients, the use of NSAIDs can lead to deterioration and fluid retention in the body.Care must also be taken when prescribing dexketoprofen to patients using diuretics or susceptible to hypovolemia, since they increase the risk of nephrotoxicity.
Caution is necessary when prescribing the drug to elderly people, since they more often detect impaired renal function, liver or cardiovascular system, as well as the occurrence of undesirable reactions, such as gastrointestinal bleeding or intestinal perforation.
Each ampoule of Flamadex® contains 200 mg of ethanol.
Influence on the ability to drive vehicles and other mechanisms that require high concentration of attention
In connection with possible dizziness and drowsiness during treatment with Flamadex®, the ability to concentrate and the speed of psychomotor reactions may decrease.
Form release.
Solution for intravenous and intramuscular administration of 25 mg / ml.
On 2 ml in ampoules of light-protective glass with a color ring of a break or with a color point and a notch. One, two or three color rings and / or two-dimensional bar code, and / or alphanumeric coding with or without additional color rings, two-dimensional bar code, alpha-numeric coding are additionally applied to the ampoules.
On 5 ampoules in a blister strip packaging from a film of polyvinyl chloride and aluminum foil or polymer film, or without foil and film.
1 or 2 blister strip packagings together with the application instruction in a pack from a cardboard.
Storage conditions.
In the dark place at a temperature of no higher than 25 ° C. Keep out of reach of children.
Shelf life.
2 years. Do not use beyond the expiration date printed on the package.

Intramuscularly (deeply, slowly), intravenously in a jet (slowly at least 15 seconds) or drip (10-30 minutes).
Recommended dose for adults: 50 mg every 8-12 hours. If necessary, repeated administration of the drug with a 6-hour interval is possible. The daily dose should not exceed 150 mg. Flamadex® is indicated for short-term use, and treatment should be limited to a period of acute symptoms (no more than 2 days).
Liver dysfunction.
In patients with mild and moderately impaired liver function (5–9 points on the Child-Pugh scale), the total daily dose should be reduced to 50 mg and frequent monitoring of the functional parameters of the liver should be carried out. Flamadeks® should not be prescribed to patients with severely impaired liver function.
Impaired renal function.
For patients with mild renal impairment (creatinine clearance - 30-60 ml / min), the daily dose is reduced to 50 mg. Flamadex® should not be prescribed to patients with moderately severe or severe renal insufficiency (creatinine clearance less than 30 ml / min).
Elderly patients.
Dose adjustment for elderly patients is usually not required, however, due to the physiological decline in renal function, it is recommended to reduce the dose of the drug: the total daily dose of 50 mg for lung disorders of renal function in elderly patients.
Rules for the preparation of solutions.
To prepare the Flamadex® solution for intravenous infusion, the contents of one ampoule (2 ml) are diluted in 30-100 ml of a 0.9% solution of sodium chloride, glucose solution or Ringer's solution. The solution should be prepared under aseptic conditions, protected from exposure to daylight. The prepared solution should be clear and colorless.