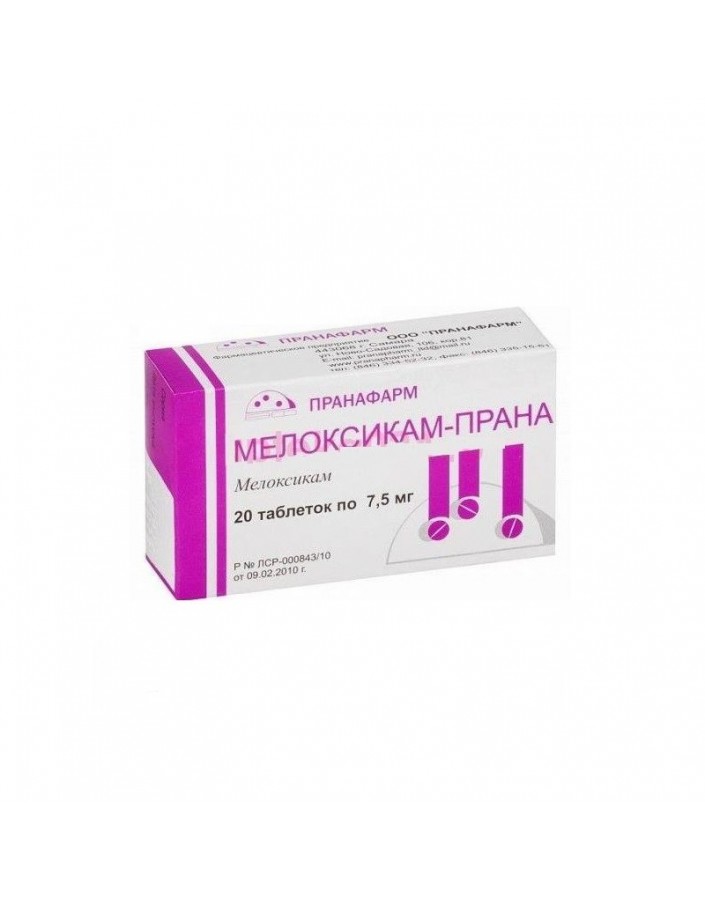 pills from light yellow to yellow with a greenish shade of color of flat-cylindrical shape. Mild marbling is allowed. pills with a dosage of 15 mg have a separation risk on the one hand.

It has anti-inflammatory, antipyretic and analgesic effect. The mechanism of action is due to the inhibition of cyclooxygenase-2 (COX-2) activity, which is involved in the biosynthesis of prostaglandins in the area of ​​inflammation. To a lesser extent, meloxicam acts on cyclooxygenase-1 (COX-1), which is involved in the synthesis of prostaglandins that protect the gastrointestinal mucosa (GIT) and participate in the regulation of blood flow in the kidneys.

Suction:
Well absorbed from the digestive tract. The absolute bioavailability of meloxicam is 89%.Simultaneous food intake does not affect absorption. The concentration of meloxicam when taking the drug orally in doses of 7.5 mg and 15 mg is proportional to the dose.

Metabolism:
Meloxicam is almost completely metabolized in the liver to form four pharmacologically inactive metabolites. The main one is 5'-carboxymeloxicam, which is formed by oxidation of the intermediate metabolite (5'-hydroxymethylmeloxicam). In vitro studies have established that biotransformation occurs with the participation of the CYP2C9 isoenzyme, CYP3A4 isoenzyme is of additional importance. Peroxidase is involved in the formation of two other metabolites, the activity of which is likely to vary individually.

Excretion:
Derived equally with feces and urine, mainly in the form of metabolites (5'-carboxymeloxicam - up to 60%, 5'-hydroxymethylmeloxicam - 9%, and the other two - 16% and 4%, respectively). With feces in unchanged form, less than 5% of the daily dose is excreted, in the urine, unchanged form of the drug is found only in trace amounts. The elimination half-life (T1 / 2) is 15–20 hours. The plasma clearance averages 8 ml / min.

Pharmacokinetics in special clinical situations:
In the elderly, the clearance of the drug is reduced.
In patients with moderately severe hepatic or renal failure, the pharmacokinetics of meloxicam does not change significantly.

- hypersensitivity (including to NSAIDs of other groups);
- A complete or incomplete combination of asthma, recurrent nasal polyposis and near the sinuses and intolerance to Acetylsalicylic acid and other NSAIDs;
- peptic ulcer of the stomach and duodenum in the acute phase;
- inflammatory bowel disease;
- bleeding of various genesis (including from the gastrointestinal tract, cerebrovascular);
- severe renal failure - creatinine clearance (CC) less than 30 ml / min (if hemodialysis is not performed);
- progressive kidney disease;
- severe liver failure or active liver disease;
- severe heart failure;
- bronchial asthma caused by taking acetylsalicylic acid;
- confirmed hyperkalemia;
- Lactase deficiency, lactose intolerance, glucose-galactose malabsorption;
- children's age up to 12 years;
- pregnancy;
- lactation (breastfeeding);
- hypersensitivity to the drug.

At rheumatoid arthritis the recommended dose is 15 mg / day; Depending on the therapeutic effect, the dose may be reduced to 7.5 mg / day.
At osteoarthrosis the drug is prescribed at a dose of 7.5 mg / day, in the absence of an effect, the dose can be increased to 15 mg / day.
At ankylosing spondylitis the daily dose is 15 mg. The maximum daily dose should not exceed 15 mg.
The drug is taken 1 time per day during the meal.
In patients with an increased risk of side effects, as well as in patients with severe impaired renal function (CC less than 30 ml / min) on hemodialysis, the dose should not exceed 7.5 mg / day.
In patients with impaired renal function (CC more than 30 ml / min) correction dosage is not required.

On the part of the respiratory system:
rarely - exacerbation of bronchial asthma.

From the urinary system:
infrequently, hypercreatininemia and / or an increase in serum urea concentration; rarely, acute renal failure; connection with the reception of meloxicam has not been established - interstitial nephritis, albuminuria, hematuria.

Treatment:
gastric lavage, taking activated charcoal (within 1 hour after taking the drug); if necessary, conduct symptomatic therapy. Kolestiramin accelerates the elimination of meloxicam from the body. Forced diuresis, alkalization of urine, hemodialysis are ineffective due to the high degree of binding of meloxicam with blood proteins. There is no specific antidote.

Care should be taken when using the drug in patients with a history of gastric ulcer and duodenal ulcer, and in patients receiving anticoagulant therapy, because in this category of patients increased risk of developing erosive and ulcerative lesions of the gastrointestinal tract.
Care should be taken to monitor renal function when using the drug in elderly patients, patients with chronic heart failure, in patients with cirrhosis of the liver, as well as in patients with hypovolemia as a result of surgical interventions.
Patients taking diuretics and meloxicam at the same time should receive enough liquid.
If you experience allergic reactions (itching, skin rash, urticaria, photosensitivity), you should stop taking the drug.
Meloxicam, like other NSAIDs, can mask the symptoms of infectious diseases.
Influence on ability to drive motor transport and control mechanisms
Against the background of the drug, the patient should not engage in potentially hazardous activities that require increased attention, because may cause headache, dizziness, drowsiness.

List B. Store in a dry, dark place at a temperature not higher than 250C.
Keep out of reach of children.