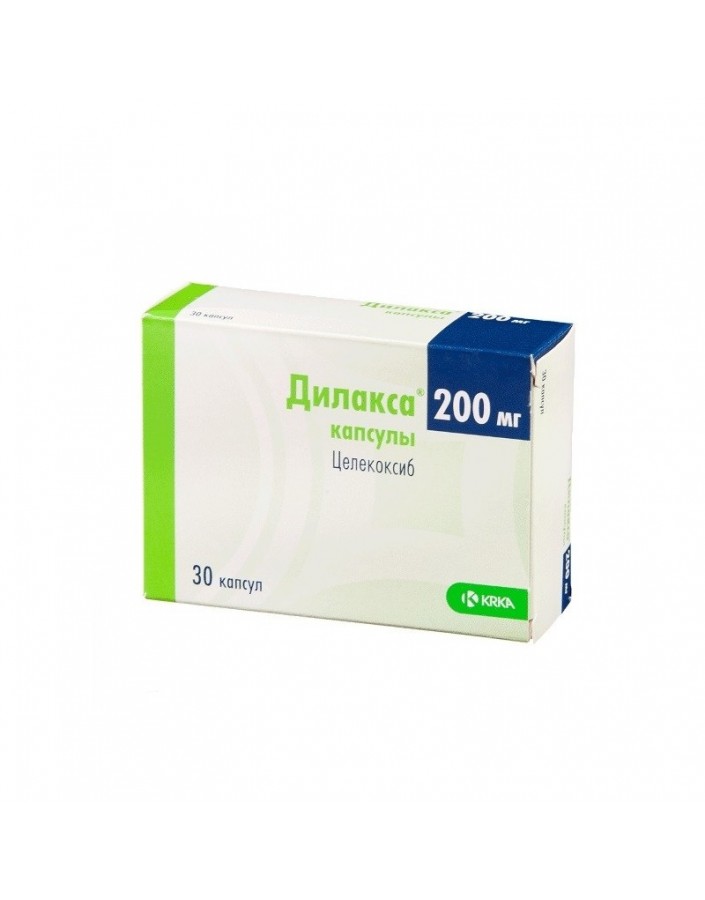 Capsules 100 mg. Hard gelatin capsules No. 3 are white (body and cap). The contents of the capsules are granulated powder of white or almost white color.

Capsules 200 mg. Hard gelatin capsules No. 1 are brownish-yellow in color (body and cap). The contents of the capsules are granulated powder of white or almost white color.

Celecoxib has anti-inflammatory, analgesic and antipyretic effects, blocking the formation of inflammatory prostaglandins (Pg) mainly due to inhibition of cyclooxygenase-2 (COX-2). COX-2 induction occurs in response to inflammation and leads to the synthesis and accumulation of Pg, primarily PgE2that causes increased inflammation (swelling and pain). In therapeutic doses in humans, celecoxib does not significantly inhibit cyclooxygenase-1 (COX-1) and does not affect the concentrations of Pg, which are synthesized as a result of activation of COX-1,as well as normal physiological processes associated with COX-1 and occurring in the tissues, primarily of the stomach, intestines and platelets.

Celecoxib does not cause a decrease in glomerular filtration rate in elderly patients and patients with chronic renal failure (CRF), transiently reduces sodium excretion. In patients with arthritis, the incidence of peripheral edema, arterial hypertension and heart failure was comparable to that in patients receiving non-selective COX inhibitors, which have inhibitory activity against COX-1 and COX-2. This effect was most pronounced in patients receiving diuretic therapy. However, there was no increase in the incidence of high blood pressure and the development of heart failure, and the peripheral edema was mild and went away on its own.

When taken on an empty stomach, celecoxib is well absorbed, reaching a maximum concentration (Cmax) in blood plasma after about 2-3 hours. Cmax in blood plasma after administration of 200 mg of celecoxib is 705 ng / ml. The absolute bioavailability of celecoxib has not been studied. Cmax and the area under the concentration-time curve (AUC) is approximately proportional to the dose taken in the range of therapeutic doses up to 200 mg 2 times a day, when using celecoxib at higher doses, the degree of increase in Cmax and AUC occurs less proportionally.

Taking celecoxib along with fatty foods increases the time to achieve Cmax about 4 hours and increases absorption by about 20%.

The degree of binding to plasma proteins does not depend on the plasma concentration of celecoxib and is about 97%. Celecoxib does not bind to red blood cells. Celecoxib penetrates the blood-brain barrier.

Celecoxib is metabolized mainly with the participation of the cytochrome P450 (CYP) CYP2C9 isoenzyme in the liver by hydroxylation, oxidation, and partially glucuronidation (see the section "Interaction with Other Drugs"). The resulting metabolites are not pharmacologically active against COX-1 and COX-2.

The activity of the CYP2C9 isoenzyme is reduced in patients with genetic polymorphism, such as the polymorphism homozygous for the isoenzyme CYP2C9 * 3, which leads to a decrease in the efficiency of enzymes.

Celecoxib is excreted through the intestines and by the kidneys as metabolites (57% and 27%, respectively), less than 1% of the dose taken - unchanged. With repeated use the half-life (T1/2) is 8-12 hours, and clearance is about 500 ml / min. With repeated use, equilibrium plasma concentrations are reached by the 5th day of administration. Variability of the main pharmacokinetic parameters (AUC, CmaxT1/2) is about 30%.The average volume of distribution in the equilibrium state is approximately 500 l / 70 kg in young healthy patients, which indicates a wide distribution of celecoxib in the tissues.

Pharmacokinetics in selected groups of patients

In patients older than 65 years, an increase of 1.5-2 times the average values ​​of Cmax and AUC, which is largely due to changes in body weight rather than age (older patients tend to have lower average body weight than younger people, which is why they, all other things being equal, have higher celecoxib concentrations). For the same reason, older women usually have a higher plasma concentration of celecoxib than older men. These pharmacokinetic features, as a rule, do not require dose adjustment. However, in elderly patients with a body weight of less than 50 kg, treatment should be initiated with the minimum recommended dose.

In elderly patients with glomerular filtration rate (GFR)> 65 ml / min / 1.73 m2associated with age-related changes and in patients with GFR of 35-60 ml / min / 1.73 m2, the pharmacokinetics of celecoxib does not change. There is no significant correlation between serum creatinine concentration (or creatinine clearance (CK)) and celecoxib clearance. It is assumed that the presence of severe renal failure does not affect the clearance of celecoxib, since the main route of its elimination is the transformation in the liver into inactive metabolites.

Celecoxib, belonging to the group of inhibitors of the synthesis of Pg, when used during pregnancy, especially in the third trimester, can cause weakness of labor and premature closure of the arterial duct. The use of inhibitors of Pg synthesis in early pregnancy may adversely affect the course of pregnancy.

There are limited data on the excretion of celecoxib in breast milk. Given the potential risk of side effects in the child and the need for celecoxib for the mother, the appropriateness of breastfeeding should be evaluated.

Inside, without chewing, drinking water, regardless of the meal.

Since the risk of cardiovascular complications may increase with an increase in the dose and duration of administration of the drug Dilax®, you should take the minimum effective dose of the drug the minimum possible short course. The maximum recommended daily dose for long-term use is 400 mg.

Symptomatic treatment of osteoarthritis: The recommended dose is 200 mg per day in 1 or 2 doses.

Symptomatic treatment of rheumatoid arthritis: The recommended dose is 100 mg or 200 mg 2 times a day.

Symptomatic treatment of ankylosing spondylitis: The recommended dose is 200 mg per day in 1 or 2 doses. In some patients, the effectiveness of the use of 400 mg 2 times a day.

Treatment of pain and primary dysmenorrhea: The recommended initial dose is 400 mg, followed, if necessary, by taking an additional dose of 200 mg on the first day. In the following days, the recommended dose is 200 mg 2 times a day, as needed.

Elderly patients: usually dose adjustment is not required. However, in patients with a body weight of less than 50 kg, it is better to begin treatment with the minimum recommended dose.

Simultaneous use with Fluconazole : patients taking fluconazole (CYP2C9 isoenzyme inhibitor), Dilax® should be taken at the minimum recommended dose. Caution should be exercised when used with other inhibitors of the isoenzyme CYP2C9.

Slow metabolism of CYP2C9 isoenzyme substrates: in patients who are slow metabolizers or suspected of such a condition, Dilax should be used® with caution, as this can lead to high concentrations of celecoxib in plasma. In such patients, the initial recommended dose should be reduced by 2 times.

infrequently: "flushes", a feeling of heartbeat;

From the side of blood-forming organs:

According to post-marketing surveillance

frequency is unknown: a decrease in fertility in women * (see the section "Use during pregnancy and during breastfeeding").

* Women planning pregnancy were excluded from the study, so they were not taken into account when calculating the frequency of occurrence.