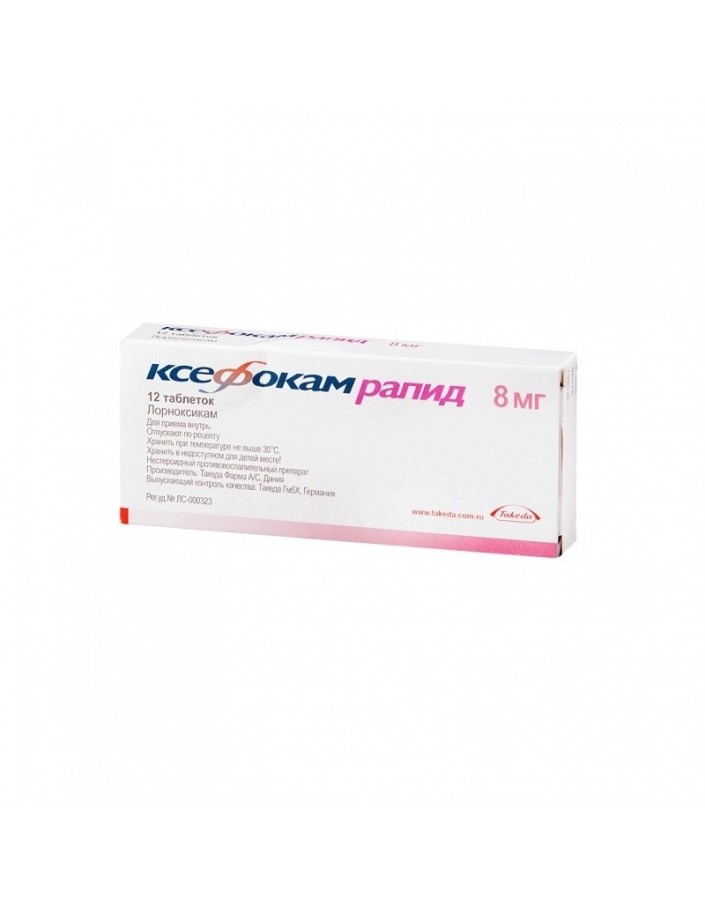 NSAIDs. It has a pronounced analgesic and anti-inflammatory effect. Lornoxicam has a complex mechanism of action, which is based on the suppression of the synthesis of prostaglandins, due to the inhibition of the activity of isoenzymes COX-1 and COX-2 both in the focus of inflammation and in healthy tissues. In addition, lornoxicam inhibits the release of oxygen free radicals from activated leukocytes.

The analgesic effect of lornoxicam is not associated with opioid action. Ksefokam Rapid does not have an opiate-like effect on the central nervous system and, unlike narcotic analgesics, does not inhibit respiration and does not cause drug dependence.

Lornoxicam is rapidly and almost completely absorbed from the gastrointestinal tract.

Simultaneous intake of lornoxicam with food reduces Cmax in plasma by 30%. Time to reach Cmax increases from 1.5 hours to 2.3 hours. Lornoxicam absorption (calculated by AUC) can be reduced to 20%.

The binding of lornoxicam to plasma proteins is 99% and does not depend on its concentration.

Lornoxicam does not accumulate after repeated administration in recommended doses.

Lornoxicam (like Diclofenac and other oxycam) undergoes metabolism with the participation of the CYP2C9 isoenzyme. As a result of genetic polymorphism, there are persons with slow and intense metabolism, which can be expressed in a noticeable increase in plasma concentration of lornoxicam in individuals with a slow metabolism. Lornoxicam does not induce hepatic enzymes.

About 2/3 of the dose is excreted through the liver and 1/3 by the kidneys.

- short-term treatment of pain in injuries and after surgical interventions;

The pills of the drug Ksefokam Rapid is taken orally with a sufficient amount of liquid.

Special dose selection for elderly patients is not required in the absence of renal impairment or liver function; in the presence of renal or hepatic insufficiency, the daily dose of the drug should be reduced.

For all patients, the dosing regimen should be based on an individual response to treatment.

Ksefokam Rapid should be prescribed in a dose of 8 mg, the maximum daily dose - 16 mg.

About 16% of patients (in the case of long-term treatment, 20-25% of patients) may experience adverse reactions associated with the gastrointestinal tract.

Urogenital: rarely, an increase in the urea nitrogen and creatinine levels in the blood, urinary disturbances, interstitial nephritis, glomerulonephritis, tubular necrosis of the kidneys, or nephrotic syndrome.

Musculoskeletal system: rarely - myalgia, cramps of the muscles of the legs.

Other: rarely a change in body weight.

- hemorrhage in the brain (including suspicion);

- children's and teenage age up to 18 years (due to insufficient clinical experience);

- hypersensitivity to lornoxicam or other components of the drug;

- hypersensitivity to other NSAIDs, including Acetylsalicylic acid.

Carefully and only after a thorough assessment of the expected benefit of therapy and possible risk should the drug be prescribed with indications of a history of gastrointestinal ulcers and bleeding, renal failure, blood clotting disorders, liver diseases (for example, liver cirrhosis), for a long time (more than months), elderly patients (65 years and older), as well as patients with body weight less than 50 kg and after surgery.

The drug is contraindicated in severe liver failure. WITH caution and only after a thorough assessment of the expected benefit of therapy and possible risk should the drug be prescribed for indications of a history of liver disease (for example, in liver cirrhosis).

The drug is contraindicated in severe renal failure (serum creatinine level> 700 μmol / l). Carefully and only after a thorough assessment of the expected benefits of therapy and possible risk should the drug be prescribed for impaired renal function.

When used in patients with coagulation disorders, careful clinical observation and evaluation of laboratory parameters (for example, prothrombin index) is recommended.

In liver diseases (for example, in liver cirrhosis), it is recommended that clinical observation and evaluation of laboratory parameters (for example, liver enzyme activity) be carried out at regular intervals.

When using the drug in elderly patients (65 years and older), as well as in patients with a body weight less than 50 kg and after surgery, it is recommended to monitor the function of the kidneys and liver.

It is important to monitor renal function in patients who have undergone extensive surgery; in violation of renal function (for example, as a result of significant blood loss or pronounced dehydration of the body); with heart failure; with simultaneous therapy with diuretics, as well as receiving drugs at the same time that are suspected or known to cause kidney damage.

It should be borne in mind that the drug increases the risk of spinal / epidural hematoma during spinal or epidural anesthesia.

The simultaneous appointment of histamine H blockers2-receptors, Omeprazole, prostaglandins synthetic analogues can reduce the risk of ulcerogenic action of lornoxicam.

If necessary, determine the 17-ketosteroids Ksefokam Rapid should be canceled 48 hours before the study.

During the period of treatment, the patient should refrain from drinking alcohol.

During the period of treatment, patients should refrain from activities that require high concentration of attention and quickness of psychomotor reactions.

Treatment: With an established or suspected overdose, the drug should be discontinued. Thanks to a small t1/2 Lornoxicam is rapidly excreted from the body. Lornoxicam is not displayed during dialysis. To date, the specific antidote is not known. It is necessary to provide for the conduct of the usual emergency measures, including gastric lavage. On the basis of general principles, it is possible to use Activated carbon only if it is taken immediately after taking the drug Ksefokam Rapid, which may lead to a decrease in the absorption of lornoxicam.

At the same time taking the drug Ksefokam Rapid with anticoagulants and inhibitors of platelet aggregation may increase the bleeding time (increased risk of bleeding); with sulfonylurea derivatives - hypoglycemic effect may increase; with other NSAIDs - increased risk of adverse reactions.

At the same time taking Ksefokam Rapid reduces the effectiveness of "loop" diuretics; may reduce the effect of ACE inhibitors.

Ksefokam Rapid increases the concentration of Methotrexate and cyclosporine in serum.

The drug should be stored out of the reach of children at a temperature of 18 ° to 30 ° C.