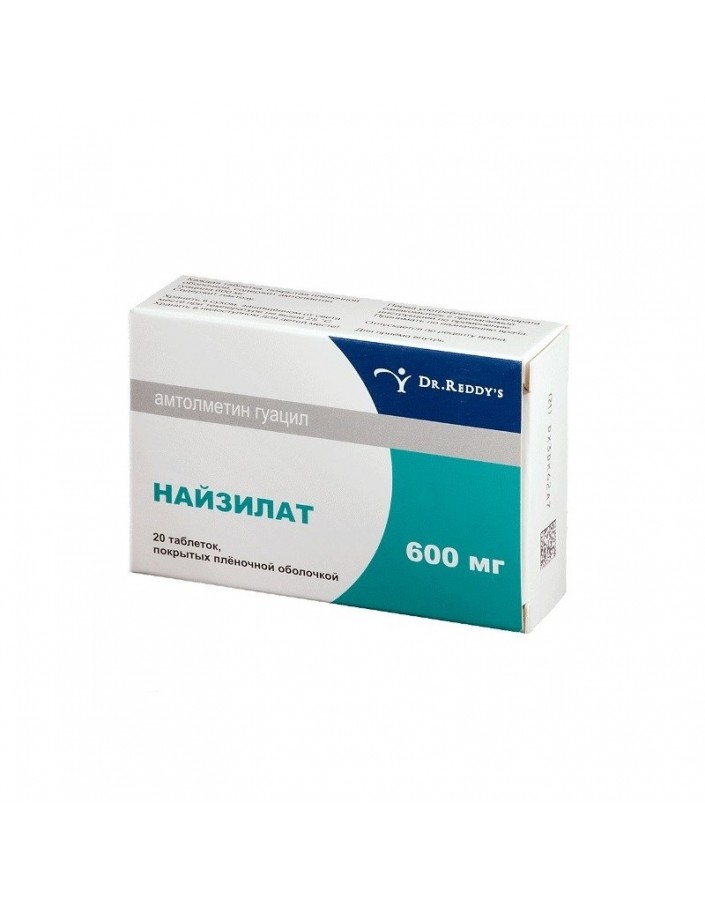 Pills: capsular, film-coated from white to almost white color, with a characteristic smell.

Amtolmetin guacil - NPVS, non-selective inhibitor of COX. Amtolmetin guacil is a precursor of tolmetin. It has anti-inflammatory, analgesic, antipyretic, desensitizing effect, has a gastroprotective effect. Suppresses pro-inflammatory factors, reduces platelet aggregation; inhibits COX-1 and COX-2, violates the metabolism of arachidonic acid, reduces the formation of PG (including in the inflammation), suppresses the exudative and proliferative phases of inflammation. Reduces capillary permeability; stabilizes lysosomal membranes; inhibits the synthesis or inactivates inflammatory mediators (PG, histamine, bradykinins, cytokines, complement factors). It blocks the interaction of bradykinin with tissue receptors, restores impaired microcirculation and reduces pain sensitivity in the inflammatory focus. Affects the thalamic centers of pain sensitivity; reduces the concentration of biogenic amines with algogenic properties; increases the threshold of pain sensitivity of the receptor apparatus. Eliminates or reduces the intensity of pain, reduces morning stiffness and swelling, increases the range of motion in the affected joints after 4 days of treatment.

The protective effect of amtolmetin guacil on the gastric mucosa is realized by stimulating the Capsaicin receptors (also called vanilloid receptors) present in the walls of the gastrointestinal tract. Due to the fact that amtolmetin guacil contains a vanillin group, it can stimulate capsaicin receptors, which in turn causes the release of the peptide encoded by the calcitonin gene and the subsequent increase in nitric oxide production (NO). Both of these actions create a counterbalance to the negative effect caused by a decrease in the number of PGs due to inhibition of COX. Amtolmetin guacil was well tolerated by patients with long-term use (for 6 months).

The absorption of amtolmetin guacil after oral administration is fast and complete. Basically, the drug is concentrated in the walls of the stomach and intestines, where a very high concentration is maintained for 2 hours after ingestion. After absorption of amtolmetin, guacil is immediately hydrolyzed by plasma esterases to form three metabolites: MED5, tolmetin and guviacol, which are transformed to the active metabolite of tolmetin, which penetrates into tissues, exerting a pharmacological effect. The main metabolic pathway of tolmetin is the oxidation of the methyl group on the benzene ring to the carboxyl. Tmax after ingestion - 20–60 minutes.

Communication with plasma proteins - 99%. T1/2 in adults, about 5 hours. Within 24 hours, the drug is almost completely excreted from the body in the form of glucuronides (80% with urine, 20% with bile).

articular syndrome with exacerbation of gout;

Designed for symptomatic therapy, reducing pain and inflammation at the time of use; the progression of the disease is not affected.

complete or incomplete combination of bronchial asthma, recurrent nasal polyposis or paranasal sinuses and intolerance to Acetylsalicylic acid and other NSAIDs (including a history of);

erosive and ulcerative changes of the mucous membrane of the stomach and duodenum;

cerebrovascular or other bleeding;

hemophilia and other bleeding disorders;

children's age up to 18 years.

From the side of the central nervous system: often - dizziness, headache, drowsiness; rarely - depression.

From the CCC: often - the rise of blood pressure.

From the side of blood-forming organs: rarely - anemia, thrombocytopenia, agranulocytosis, leukopenia.

From the skin: infrequently - skin rash (including maculopapular rash), purpura; rarely - exfoliative dermatitis (fever with or without chills, redness, hardening or peeling of the skin, swelling and / or tenderness of the tonsils), urticaria, Stevens-Johnson syndrome, Lyell's syndrome.

Reduces the effectiveness of uricosuric, antihypertensive drugs and diuretics.

Enhances the hypoglycemic effect of sulfonylurea derivatives, the action of anticoagulants, antiplatelet agents, fibrinolitikov, side effects of estrogen, GCS and mineralcorticoids.

In some patients with impaired renal function, co-administration of NSAIDs and ACE inhibitors may lead to a further deterioration in the functioning of the kidneys.

Inside To preserve the gastroprotective action of the drug amtolmetin guacil should be taken on an empty stomach.

The recommended dose of amtolmetin guacil is 600 mg 2 times a day. Depending on the degree of control of the symptoms of the disease, the maintenance dose may be reduced to 600 mg once a day. The maximum daily dose is 1800 mg.

Treatment: gastric lavage, the introduction of adsorbents (activated carbon) and symptomatic therapy (maintaining the vital functions of the body). The specific antidote of the drug does not exist.

During treatment, it is necessary to control the picture of peripheral blood and the functional state of the liver and kidneys. Treatment should be discontinued 48 hours before the determination of the 17-ketosteroids.

Influence on ability to drive vehicles and work with mechanisms. During treatment, you should refrain from engaging in potentially hazardous activities that require increased attention and speed of mental and motor responses.