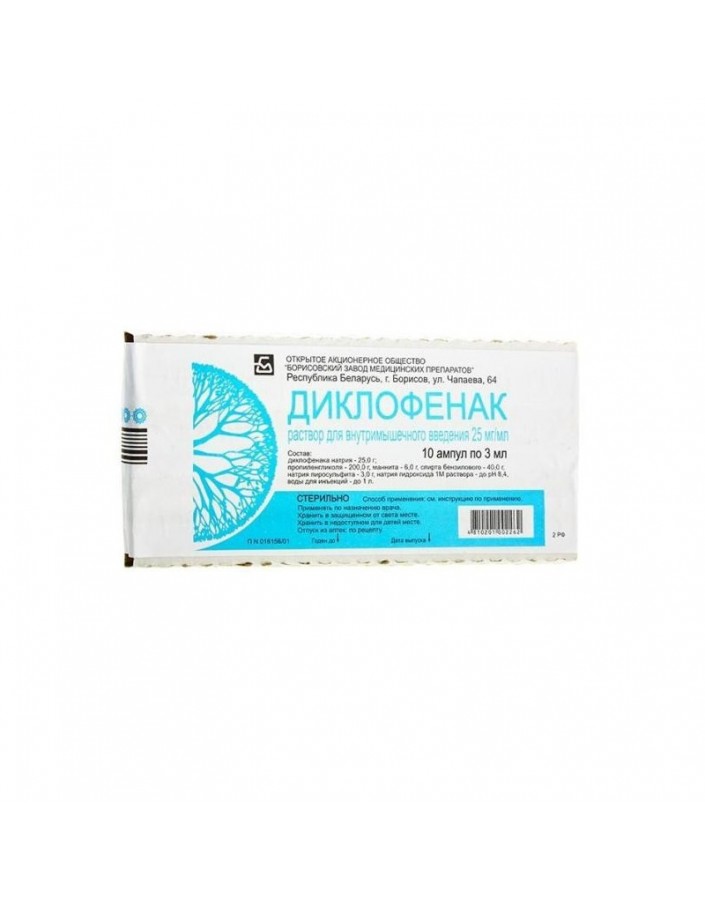 Diclofenac has anti-inflammatory, analgesic and antipyretic effects. Indirectly inhibiting cyclooxygenase 1 and 2, violates the metabolism of arachidonic acid, reduces the amount of prostaglandins in the focus of inflammation. In rheumatic diseases, the anti-inflammatory and analgesic effect of diclofenac significantly reduces the severity of pain, morning stiffness, swelling of the joints, which improves the functional state of the joint.
With injuries in the postoperative period, diclofenac reduces pain and inflammatory edema.

The time to reach the maximum concentration for intramuscular use at a dose of 75 mg is 15-30 minutes, the maximum concentration is 1.9-4.8 (on average 2.7) mcg / ml. After 3 hours after administration, plasma concentrations averaged 10% of the maximum.
Communication with plasma proteins - more than 99% (most associated with albumin).
Metabolism occurs as a result of repeated or single hydroxylation and conjugation with glucuronic acid. The enzyme system of P450 CYP2C9 is involved in the metabolism of the drug. Pharmacological activity of metabolites is lower than diclofenac.
Systemic clearance is 350 ml / min, the volume of distribution - 550 ml / kg. Plasma elimination half-life is 2 hours. 65% of the administered dose is excreted in the form of metabolites by the kidneys; less than 1% is excreted unchanged, the rest of the dose is excreted in the form of metabolites with bile.
In patients with severe renal insufficiency (creatinine clearance less than 10 ml / min), excretion of bile metabolites is increased, and there is no increase in their concentration in the blood.
In patients with chronic hepatitis or compensated liver cirrhosis, the pharmacokinetic parameters of diclofenac do not change.
Diclofenac penetrates into breast milk.

For short-term treatment of pain of various origins of moderate intensity:

Hypersensitivity (including to other NSAIDs), erosive and ulcerative lesions of the gastrointestinal tract, "aspirin" triad, hematopoietic disorders, disorders of hemostasis (including hemophilia), pregnancy, child age (up to 18 years ), lactation period.

Introduced deeply intramuscularly. Single dose for adults - 75 mg (1 ampoule). If necessary, re-introduction is possible, but not earlier than after 12 hours.
Duration of use is not more than 2 days, if necessary, further transferred to oral or rectal use of diclofenac.

Increases plasma concentration of Digoxin, Methotrexate, lithium and cyclosporine drugs.
Reduces the effect of diuretics, against the background of potassium-sparing diuretics increases the risk of hyperkalemia; against the background of anticoagulants, thrombolytic agents (alteplaza, streptokinase, urokinase) - the risk of bleeding (usually from the gastrointestinal tract).
Reduces the effects of hypotensive and hypnotic drugs.
Increases the likelihood of side effects of other NSAIDs and glucocorticoid drugs (bleeding in the gastrointestinal tract), the toxicity of methotrexate and cyclosporine nephrotoxicity.
Acetylsalicylic acid reduces the concentration of diclofenac in the blood.
Simultaneous use with Paracetamol increases the risk of the development of the nephrotoxic effects of diclofenac.
Reduces the effect of hypoglycemic agents.
Cefamundol, cefoperazone, cefotetan, valproic acid and plykamycin increase the incidence of hypoprothrombinemia.
Cyclosporine and gold preparations increase the effect of diclofenac on the synthesis of prostaglandins in the kidneys, which increases nephrotoxicity.
The simultaneous appointment with ethanol, colchicine, corticotropin and St. John's wort preparations increases the risk of bleeding in the gastrointestinal tract.
Diclofenac enhances the effect of drugs that cause photosensitization.
Drugs that block tubular secretion, increase plasma concentration of diclofenac, thereby increasing its toxicity.

Patients using the drug should refrain from activities that require increased attention and quick mental and motor reactions, alcohol consumption.

List B. In the dark, out of the reach of children at a temperature not exceeding 25 ° C.

3 years. Do not use after expiration date.