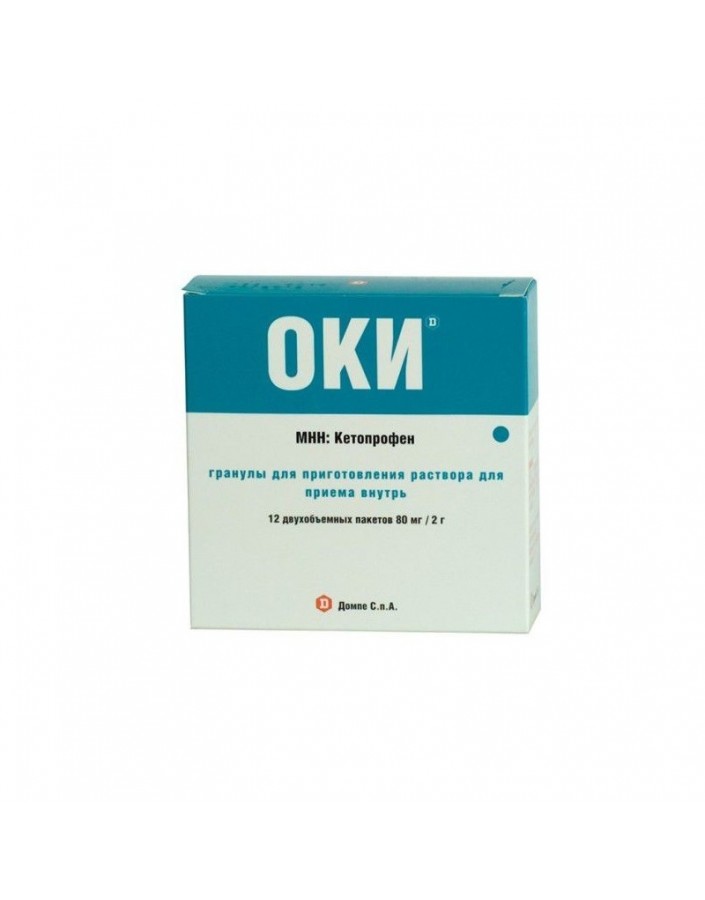 Anti-inflammatory, antipyretic, analgesic. The mechanism of anti-inflammatory action is associated with a violation of the synthesis of prostanoids (major inflammatory mediators) from arachidonic acid by blocking type I and type II cyclooxygenase. In addition, the drug suppresses the production of leukotrienes with chemotactic effects. Antiradikinin activity is also present in the spectrum of action of the drug. It stabilizes lysosomal membranes and delays the release of enzymes from them that contribute to the destruction of tissue in chronic inflammation. Reduces the activity of cytokines, inhibits the activity of neutrophils (cytokines, especially interleukin 1 and tumor necrosis factor, released during activation of neutrophils, play a crucial role in inflammatory tissue damage).
The analgesic effect of OKA is determined by its direct and indirect effect on pain receptors at the level of synapses and in the central nervous system. Indirect peripheral antinociceptive action is associated, firstly, with the inhibition of the synthesis of PGs, which increase the sensitivity of free nerve endings to stimuli (PGs also enhance the effect of other inflammatory mediators). Secondly, an important component of the pronounced peripheral analgesic effect of OKA is its bradykinin activity (bradykinin is one of the most powerful endogenous substances that contribute to the development of pain). OCI also has a direct effect on pain receptors, consisting in the depolarization of ion channels, due to which a quick effect on the pain response is carried out. The central action of the OCI is determined by the change in the configuration of the G-protein located on the postsynaptic membrane of neurons. Thus, the afferent signal of pain is reduced.

Rinse solution: 2 rinses per day. To prepare one rinse, inject into the measuring cup that comes with the package 10 ml of Oka solution (for adults -5, for children - 3 injections of 2 ml each) and dilute in 100 ml of drinking water.

For all forms. Hypersensitivity (including to other NSAIDs).
For suppositories and granules in addition. Peptic ulcer in active form or in history, chronic dyspepsia, gastritis, leukopenia, thrombocytopenia, severe dysfunction of hemocoagulation, children (up to 6 years).

Contraindicated in pregnancy. When taken orally or rectally during pregnancy, hemodynamic disturbances may occur in the newborn, which is accompanied by severe respiratory function disorders, and use shortly before birth can lead to their delay. At the time of treatment should stop breastfeeding.

When ingestion and rectal administration. With simultaneous use of anticoagulants, diphenylhydantoin or sulfonamides, their dosage should be reduced. Not recommended for use with Acetylsalicylic acid or other NSAIDs.

For dosage forms of systemic action. With the appearance of any intestinal disorders should discontinue use of the drug.
The drug should be used with caution in patients with impaired liver function (regular monitoring of the biochemical parameters of the blood is necessary, especially with long-term treatment with the drug). In patients with asthma or allergic diathesis, they can cause bronchospasm, shock or other allergic reactions. With extreme caution should be prescribed for severe renal dysfunction. Taking the drug does not lead to addiction or addiction.
During the period of use of the drug is not recommended to drive a vehicle or engage in activities that require high concentration of attention.

Accidental ingestion of the rinse solution does not lead to negative consequences.
Prolonged use of the irrigation solution may cause sensitization. In this case, you should stop using the drug and find appropriate treatment methods.
Preparation of rinse solution.
Bring the nebulizer into a functional position by turning the nozzle in the direction of the "open" lettering, inject the plastic cup by pressing the nebulizer until it stops (repeat the injection until the prescribed dose is reached), dissolve the injected dose in 100 ml of drinking water (half a glass cup).